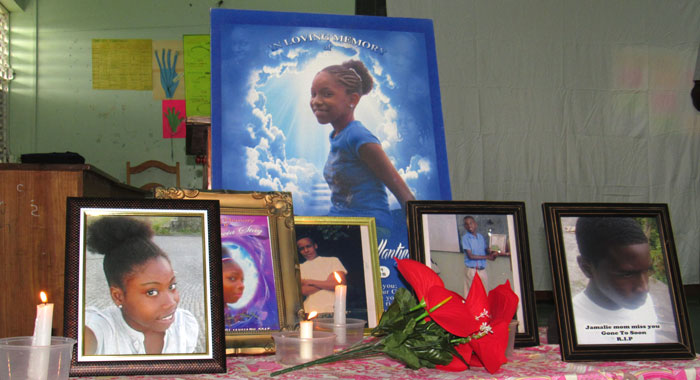 A temporary memorial set up at Fancy Government School on Sunday.

On Jan. 12, 2015, St. Vincent and the Grenadines and much of the region joined with Fancy in mourning the loss of seven students who died when a minivan in which they were travelling careened down an embankment and plunged into the sea.

However, five years on, the tragedy seems all but forgotten, with not even a passing mention by Prime Minister Ralph Gonsalves as he spoke for more than two hours — on the anniversary of the tragedy — at the convention of his Unity Labour Party in Campden Park.

However, on Sunday, Fancy, home of the seven students who lost their lives, paused to remember.

It was a time of thanksgiving and rejoicing expressed through songs, hymns and speeches as the villagers gathered at the Fancy Government school at an event hosted by the Bethel Baptist Church to commemorate the tragedy.

The tragedy, which occurred at Rock Gutter, an uninhabited area between Fancy and Owia, claimed the lives of  Jamalie Edwards, 14, and his brother, Jamall, 12; Anique Alexander, 11; Racquel Ashton, 17; Glenroy Michael, 16, Chanstacia Stay, 15; and Simonique Ballantyne.

The bodies of Stay and Ballantyne were never recovered from the raging seas, which stripped the minivan down to the chassis in just hours.

Thousands of persons from across St. Vincent and the Grenadines attended the funeral of the other five students, who were buried next to each other on Jan. 25, 2015 in a newly-commissioned cemetery.

The seven students were among 21 persons on board HL636, driven by

Beside the driver, only the conductor, Ehud Myers, 67, and a nurse were not students.

At Sunday’s event, parents of the deceased told the audience that although it may seem that all is well, they are struggling with their loss.

They also thanked the gathering for the love and support shown over the years and encouraged especially the survivors to always be thankful to God.

Nelcia Stay, Chanstacia’s mother, said: “No one has the right to tell us it has been five years and we must get over it — time to get over it. You have never lost a child; you have not been in our shoes.”

Junior Bowens, Ashton’s father told the audience that he went to Rock Gutter Sunday morning and the waters were raging, just as it was five years ago.

He said that since the tragedy, the community has grown closer and he still suffers from sleepless nights.

Wendy Michael, mother of Maxroy “Danny” Michael — who was heroic in his efforts to rescue several children and ran over two miles to inform the village of the tragedy — said her son who is in his second year at Community College is full of potential and is doing well academically.

She said her son still remembers the ordeal and there is a lot he would like to say but cannot express.

Speaker for the event, Norman Michael of the Bethel Baptist Church based his exhortation on Luke 12:20 and encouraged the audience, saying, “We cannot live on earth forever — it is going to pass away.  Anything done for God will last till eternity.

In March of 2017, the Serious Offences Court discharged Nanton and Myers, at the preliminary inquiry stage on charges brought in connection with the students’ death, upholding a no case submission by defence counsel Grant Connell.

Also in March 2017, the Taiwan Embassy in Kingstown assisted the government in erecting a monument in memory of the deceased students.