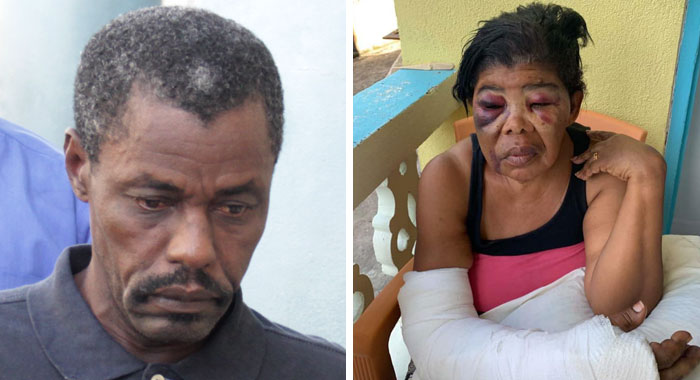 A Twenty Hill man was, on Monday, brought before the Kingstown Magistrate’s Court charged with inflicting grievous bodily harm on his wife.

Dennis Shallow, 55, is alleged to have committed the crime on Marilyn Chance-Shallow, 57, at their Twenty Hill home on Dec. 27, 2019 – reportedly two days before their wedding anniversary.

He pleaded not guilty to the charge at his arraignment before Senior Magistrate Rickie Burnett.

iWitness News understands that Chance-Shallow has a broken right arm and is still black and blue in the face, reportedly as a result of her husband’s alleged crime.

When bail came up at the arraignment, Chance-Shallow told the court that her husband left their home after the alleged crime and has not returned.

Prosecutor Police Constable Corlene Samuel told the court that her information is that after the alleged assault, Shallow went into hiding.

She said Shallow’s brother is said to have met him in a shed — “dehydrated and all that” — and took him to a doctor and then to the police.

The prosecutor told the court that the virtual complainant has expressed fear of her alleged attacker.

Chance-Shallow’s right hand is in a cast and is supported by a sling around her neck. Samuel told the court that Chance-Shallow reportedly sustained the injury during the alleged attack by her husband.

She said the Crown would not object to bail on the condition that Shallow resides elsewhere and has no contact with the virtual complainant.

However, the senior magistrate said that these types of matters are not simple.

He said that while the charge against Shallow is an allegation, the prosecution was already asking the court to throw him out of the home.

But Samuel told the court that there might have been an incident and if the man and his wife remain in the same home, it might escalate.

Samuel further said that Shallow has told police that he would not be going back to his marital home, choosing instead to live at his mother’s house.

“But the senior magistrate said that Shallow could be telling the police that because he is scared.

Burnett reiterated that “these matters are not the easiest of matters”, noted that the offence is a bailable one.

He said that the complainant was also before him and while he does not know what happened, he was seeing what appears to be an injury.

“There may be a connection between this charge and her injury. They are married; they live in the same house. If I am to grant him bail because it is a bailable offence, it is possible that things may happen again,” the magistrate said, even as he noted that he cannot hold Shallow in custody forever.

“Because if a party is afraid of a party, is that a right for the court to have you locked up until your trial?”

The senior magistrate asked lawyer Israel Bruce, who was at the bar table but was not involved in the case, to comment on the matter.

Bruce said that he appreciates “the delicacy of the matter”.

“What the court doesn’t want … is that a defendant goes back into cohabitation and the worst happens,” the lawyer said.

He submitted that there is nothing that prevents the court from granting bail with conditions, one of which should be that the defendant must live elsewhere.

“And if that is possible, then it makes it a lot easier for the court,” Bruce said.

Meanwhile, Shallow told the court that he can live at his mother’s place, which, he said is about a 15-minute walk from his marital home.

Bruce said it would be prudent for the court to have the matter stood down, and if possible to have Shallow’s mother come to the court to say whether she would accommodate him.

Shallow told the court that his mother is 85 but said that his brother, who also lives with their mother, was in court.

Bruce suggested that the court ask that brother whether he had had any discussion with his mother about Shallow residing with them.

When the brother took the stand, he said Shallow can “one hundred and ten per cent” stay at the home of their mother, who is 85.

He said that “due to the disaster” between Shallow and his wife, they decided to take him in.

“And I personally, one hundred and ten per cent will take care of him,” the brother told the court.

The brother said he has interfaced with “the magistrate Ms Browne” and that he knows certain procedures with the law and would not want to break it.

“Well, I am glad to hear that but this is Magistrate Burnett, not Ms Browne. I am a different man,” the senior magistrate said.

Addressing the defendant, Burnett said: “Mr. Shallow, you’re sure you can take that? You’re sure about that?

“Remember, that is his wife you know,” he added to Shallow’s brother.

The senior magistrate continued: “I know what I am asking him. I don’t have to say out everything. We are all adults here. You’re sure you can make that?”

Chance-Shallow told the court that she would like to get a protection order.

The senior magistrate told her to go to the Family Court and make that application there.

“But I am going to order him as well to keep away from you,” he said.

“This is a ‘hardish’ thing to tell a husband and wife not to do what they have to do.”

The magistrate granted Shallow bail in the sum of EC$2,500 with one surety and ordered him to have no contact with his wife until the matter is disposed of.

He was also ordered to reside with his mother.

Shallow asked that police escort him to his marital home to collect his belongings, and the court ordered that that be done.