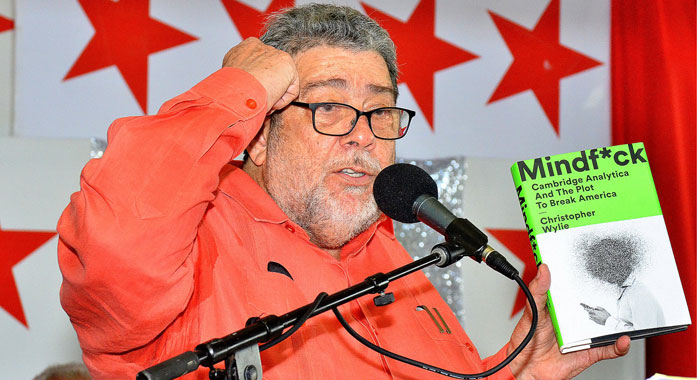 Prime Minister Ralph Gonsalves says that the main opposition New Democratic Party (NDP) will, this year, run a “nasty” election campaign as he said they did in the last four elections.

He said that the “nastiness of the campaign” is wrapped up with the people behind the NDP, who he said wants to sell the passports and citizenship of St. Vincent and the Grenadines (SVG).

SVG remains the only independent Organisation of Eastern Caribbean States nation without a citizenship by investment (CBI) programme, which Gonsalves has dismissed as selling passports.

The NDP, which operated a CBI programme when it was in office, said it would re-introduce such an initiative if re-elected to office.

Gonsalves said the NDP’s CBI push is “wrapped up with an Englishman who lives in Switzerland and with some Chinese businessmen from Mainland China”.

He said that is why the NDP “even without making contact with the Chinese government” said they would change diplomatic recognition from Taiwan to China.

“It has to do with passport money,” Gonsalves said, adding, “and that is where they hoping to get the money for their campaign, as they got the last time.”

He said that the NDP also wanted to employ Strategic Communications Laboratories (SCL) and the successor organisation, Cambridge Analytica “which Trump people had hired in America with a psychological warfare campaign”.

Gonsalves said he wanted to tell people again about SCL adding that he had said that they are “mindbenders — that they will tap into your email, your internet; they will illegally tap your phone because they have done it before.

“And SCL has contempt for black people. You hear me?” he said adding that the leadership of SCL “are a bunch of racists”.

“Those are the people that the NDP get themselves hooked up with you know,” he said.

Gonsalves read from “Mindf*ck – Cambridge Analytical and the Plot to Break America” a Christopher Wyllie book published in 2019.

“They tried to break St. Vincent and the Grenadines before they break America with SCL,” he said, adding that the ULP is stronger than the Democratic Party in the United States.

“We know how to fight them,” Gonsalves said.

He said that Wyllie was a Canadian who went to work with Cambridge Analytica but couldn’t stomach them and spoke out.

The prime minister said that he had been targeted and has the documents.

“But you know me,” he said, adding, “What racist from England come to manipulate the NDP to tell you about Ralph, you know Ralph better than them.”

“I ain’t come to you perfect. I come to you as a good human being doing service on behalf of the people of St. Vincent and the Grenadines,” Gonsalves said.

The book speaks of the SCL’s alleged ability to hack people’s IP address and monitor their actions remotely and in real-time.

“They stay in London watching you, because they want to tap as many of you as possible to know your mind and try to fashion things to come to your mind, to corrupt your mind against Ralph, as they were trying to corrupt them against the PNM in Trinidad,” he said.

The article speaks of “Mr Passports”, Christian Kalin, the chairman of Henley & Partners.

The article says that SCL and Kalin worked together on the election campaign in SVG in 200.

It further notes that while the company tell its clients it does not lose elections, it actually lost in this instance, when they worked with Arnhim Eustace, then leader of the opposition.

Gonsalves commented: “Counter operations including psychological warfare. You hear me?”

“In emails seen by The Spectator, Kalin describes to Eustace what ‘we could do with you once you are in government’. He even goes on to suggest what the candidate might say in his campaign.”

Gonsalves spoke of a day in the 2010 election campaign when he said Eustace opened “a manila envelope and start to read something like he saw it for the first time.

“That is what is coming here,” he said.

“‘You might wish to discuss this with your strategists,’ he tells Eustace, ‘and think about what you may wish to include in your propaganda (having used this word, the below points are not propaganda but is very much a reality if you let us do it). If there is an acceptable government in place (i.e. NDP) you can count on the following.’”

Gonsalves asked the audience if they remember Eustace saying there were investors who would come to SVG only if the NDP is in office.

“And he read out – here is what Kalin gave him to read out. It is here you know, the fella see the email from Kalin to Eustace,” Gonsalves told party supporters.

“Kalin then lists various investments that Eustace could count on if he won the election, such as a large residential and hotel development, a new chain of retail banks from ‘an important international banking group’, a construction group to invest in major infrastructure projects, as well as input from ‘a global player in private air-craft services’ and from ‘several of the world’s most experienced international tax specialists’.”

Gonsalves said that when he said that Eustace was seeing for the first time the statement he read and fumbling when he took it out of the envelope, “I am an old criminal lawyer you know.

“I know when a man lying. I see it. And I asked the question, ‘Who are these people who are going to do this?’

“He said we will find out after they win. In other words, buy a pig in a bag,” Gonsalves said.

The prime minister said the current NDP leader, Godwin Friday, answered a question similarly in the United States recently, saying vote the NDP and the population would then know where the money for certain things would come from.

Gonsalves also read from the Times of London, which said it had seen a 2011 presentation to potential clients in which SCL admitted that it carried out on him

A “targeted digital attack,” meaning that “within three weeks every single reference to him on the first two pages of Google … referred to the candidate’s horrific track record of corruption, coercion, rape allegations and victimisation”.

Gonsalves said: “In other words, you make up the stories, you get the internet crazies to write, and you write, and you devote three weeks by manipulating the algorithm so that the only thing that you see for the first two or three pages of Google is nastiness about Ralph. You don’t go past the first two pages. That is part of the psychological warfare which they wage against De Comrade.

Gonsalves said his government is opposed to CBI programmes on the grounds of principle and practicality.

“The principle is that the highest office of the land is that of citizen — higher than governor-general, higher than prime minister. It is not a commodity for sale. Citizenship is that bond established between people in a political society called a state, where we owe each other certain rights and obligations…

“And the passport is the outward sign of the inward grace of citizenship and that, too, is not a commodity for sale,” the prime minister said.

He said the NDP has said that selling passports is an easy way to make money.

“An easy way to make money too is to set up state-sponsored whore houses, but would you set it up?” Gonsalves said.

The prime minister has said that general elections will be held by year end, ahead of the March 2021 constitutional deadline.