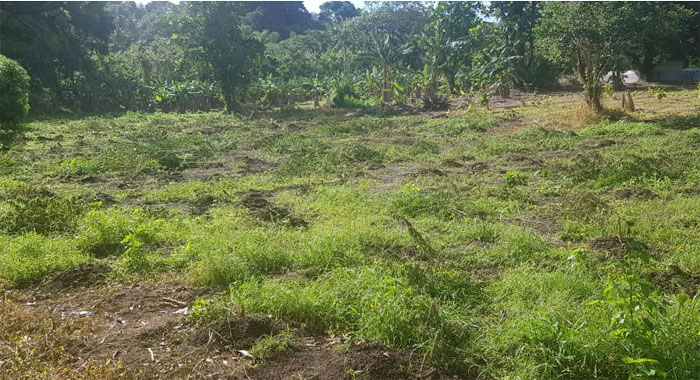 The farm in Richmond Vale, showing some of the marijuana that was cut down.

Police, on Tuesday, destroyed a marijuana farm belonging to a 69-year-old man who had planted his first crop of ganja ever, in the hope of benefiting from an amnesty that has been pending for more than a year.

The man, Cecil Hamilton Edwards, of Fitz Hughes, told iWitness News, on Thursday, that his marijuana crop was destroyed while other farmers near him are reaping their crop.

Edwards said he supports the opposition New Democratic Party (NDP) and wondered if politics played a role in the destruction of his marijuana crop.

He told iWitness News that his son had provided an electricity connection for a village meeting MP for North Leeward, the NDP’s Roland “Patel” Matthews held in Fitz Hughes Monday night.

But Commissioner of Police Colin John, speaking to iWitness News separately, on Thursday, said politics was not a factor in the actions of the police.

Edwards said he has traditionally grown bananas, cocoa, dasheen, sweet potatoes, eddoes and avocado and other crops on his farm at Richmond Vale.

However, he decided to try his hand at marijuana after the efforts of the Medical Marijuana Authority (MCA) to sensitise residents of the area about the medical marijuana industry.

The Ralph Gonsalves Unity Labour Party government in December 2018 passed amendments to the nation’s marijuana law, which are yet to come into effect.

Among the changes is the proposed granting of traditional cultivator licences to persons who have been growing marijuana for a number of years, and smallholder farmers wishing to get into the industry.

The new law also includes an amnesty period during which persons who have grown marijuana illegally would be exempt from prosecution and could sell their crop to a buyer in the medical marijuana industry.

The amnesty period is yet to be announced.

Edwards told iWitness News that he planted his marijuana crop last October having applied for a licence with the assistance of Junior “Spirit” Cottle — head of the Cannabis Revival Committee, a group that represents the interest of marijuana farmers.

Edwards said he paid EC$120 as application fee and was awaiting the issuance of the licence but was told he could go ahead and plant marijuana.

He said he was planting the marijuana on 5.9 acres of lands, on which he also grows the crops he had traditionally cultivated.

Edwards was in Kingstown on Tuesday when he got information that members of the Rapid Response Unit, a tactical arm of the police force, had arrested his two workers and had destroyed his marijuana crop, leaving those around him untouched.

“They light some afire, they walked with some and leave the balance on the ground,” Edwards said of the felled marijuana plants.

He said he lived in Venezuela for 12 years and worked with police as a translator.

He said that while other farmers around him are reaping marijuana, his field was destroyed.

He said contacted his liaison, who in turn contacted Cottle.

Cottle is said to have made contact with the police and the two men were released without charge.

However, the police chief told iWitness News that he received information that some police officer saw the cannabis growing at the side of the road and destroyed the field closest to the road.

“When they got on to me, I told them about the government’s policy as regard the amnesty and everything like that and told them they should desist from doing that,” John told iWitness News.

He said he did go to the area and cannot say if there were other fields there, but said that was very likely.

“But what I am saying, based on the information I got from the police, the closest field to the road, that’s where they went and started to destroy some cannabis.”

He said that the officer in charge of the drug squad contacted him and he told him that they should await the outcome of the amnesty before destroying any more marijuana.

The police chief was told of the allegation of a link between the political meeting and the destruction of the field.

John said: “Well, definitely no political consideration was given by the police. I, for sure, didn’t know and the head of the drug squad didn’t know who Patel got hook up from or who he didn’t get hook up from.”

Matthews visited Edwards’ field, and in a video post on Facebook, noted that the marijuana was almost ready to be harvested.

He further said that usually when police cut down marijuana, they would take the plants as evidence.

“But the fact that they cut them down and left them right in the field, something is not right at all.”

Matthews described the action of the police as “very disgraceful” saying anyone who knows about marijuana cultivation knows that it is a lot of hard work.

“Monies were spent to bring this crop because these guys are adhering to the law, they have applied for their license, the farm has been visited by the Medical Cannabis Authority and their licences are pending, he said, adding that the MCA knows exactly where the farm is.

Matthews, who has publicly said that he grew marijuana before he became a teacher and later a politician, said that the marijuana was almost ready to be harvested.

Edwards told him that he will be seeking compensation.

“I need some kind of compensation because I spend my money, I have to pay workers to work, the workers to plant because I never plant marijuana before I get instruction…”