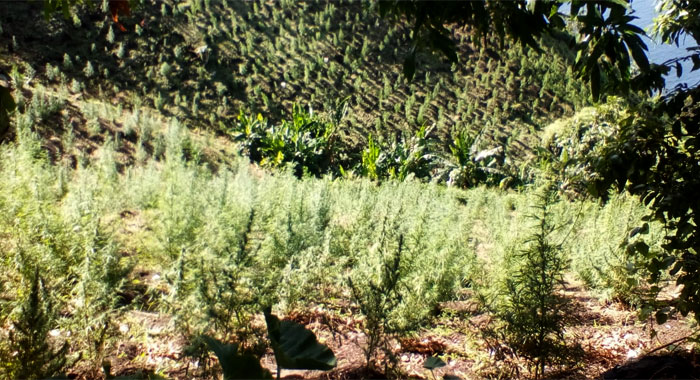 Marijuana cultivation in the mountains of St. Vincent.

Cannavais, a foreign investor in the medicinal marijuana industry in St. Vincent and the Grenadines (SVG) has praised the Unity Labour Party (ULP) administration for its “proactive approach”.

In a statement, on Monday, Cannavais attributed its “strong start” in SVG to “the ULP Government’s proactive approach to foreign investment”.

The company’s spokesperson said that the ULP administration has been a key part in the company’s establishment in SVG.

Cannavais, which describes itself as “a vertically integrated cannabis company”, has been licensed to cultivate, extract and manufacture marijuana products and says it has “a strong focus towards stabilised, premium quality genetics”.

The company said that by adopting eco-friendly, organic and sustainable agricultural practices, it can cultivate “hundreds of thousands of plants concurrently and develop proprietary cannabis strains that deliver benefit to a wide range of medicinal and lifestyle issues”.

The Medicinal Cannabis Authority (MCA) is responsible for regulating the cultivation, supply, possession, production and use of cannabis for medicinal purposes.

Cannavais was amongst the first foreign investors to be issued a marijuana license in SVG.

The company said, “this mementous step” in its development allows it to begin the cultivation and manufacturing of medicinal cannabis and premium cannabis genetics in SVG.

The company said that the Ralph Gonsalves ULP administration has taken measures “to successfully position the country to capitalise on the opportunities that the international medicinal cannabis sector is expected to bring”.

It said that medicinal cannabis can now be legally prescribed in many countries around the world, including the UK, Canada and in over 30 states in the US, prompting expectations that world-wide patient use will increase as forecast.

In December 2018, the ULP administration passed two pieces of legislation facilitating the establishment of a medical marijuana industry in SVG.

Among other things, the laws provide for the granting of licences for the cultivation of marijuana for medicinal use.

Under a new law, which is yet to come into effect,  a person cannot be arrested, jailed or get a record for having 56 grammes in their possession, and there will be a specific amnesty period for traditional growers of marijuana.

A years-long study by the CARICOM Marijuana Commission, which was established upon Gonsalves’ urging, had recommended that marijuana be decriminalised for all purposes, and warned against a medical marijuana only approach to reform.

Cannavais said that to “continue building on the progress that SVG have seen over the past decade”, the ULP introduced the Medicinal Cannabis Industry Act, 2018 and established the MCA in 2019.

Simon Robins, head of PR and Marketing at Cannavais, explained how the government has been a key part in the company’s establishment.

“From the very beginning we recognised how important working together with traditional cultivators and the government would be,” Robins said.

“These relationships are proving vital in building a long-term and successful local industry. The ULP’s forward-thinking approach to the medicinal cannabis industry has made St. Vincent an attractive place for Cannavais, and other foreign companies, to invest and set up operations.”

The company said that its “co-operative initiative” has been a key part of its plans to produce premium quality medicinal cannabis products for the international export market.

“Cannavais has chosen St. Vincent and the Grenadines to invest in largely due to its long-standing history with traditional cultivators, and the optimum cultivation conditions it provides. But also, the ULP government recognises the benefits companies like Cannavais can bring to the local community and have been proactive in building strong relationships with foreign investors,” Cannavais said in the statement.

Robins further said: “The assistance of government officials like Minister Saboto Caesar and the work of the MCA, both of whom have worked tirelessly in providing the assistance and framework required to build a successful industry has to be commended. It is very encouraging to see the level of commitment the ULP and MCA has put into driving the medicinal cannabis industry forward.”

The company said SVG’s agriculture sector required much diversification after the spread of Black Sigatoka, which resulted in the decimation of the island’s banana industry around 2013.

“The ULP identified the emerging medicinal cannabis sector as an opportunity to re-establish and develop the islands’ agriculture industry,” Cannavais said.

“The ULP government recognised the industry as an effective way of making use of the country’s natural agricultural resources, history and climate to increase foreign investment, creating both opportunities for the country and its citizens. A step that has gained investment from foreign companies and grown the islands’ international reputation.

“Earlier this year, St. Vincent and the Grenadines was elected by the UN General Assembly to the Security Council. With an island population of around 110,000, it is the smallest nation to ever be selected for a non-permanent seat,” the statement said.

Robins commented: “This being another example of the ULP government’s success in building the international reputation of Saint Vincent and the Grenadines, and evidence the country provides great potential for growth and for its citizens to prosper.”