‘Hand to mouth’ internet crazies the fastest to criticise me — PM 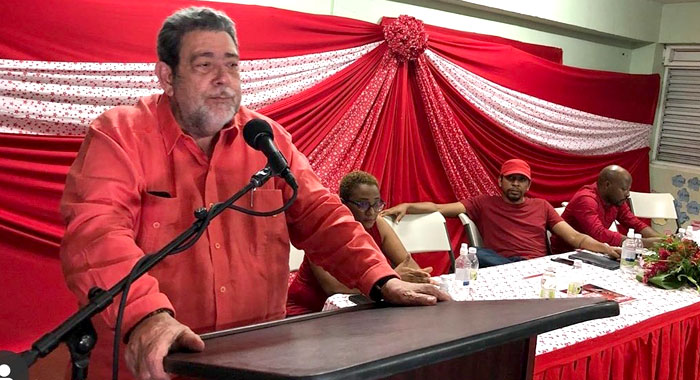 Prime Minister Ralph Gonsalves has again lashed out at overseas-based Vincentians who use the internet to criticise his government.

Gonsalves, who has long referred to these critics as “internet crazies” said on Sunday that some of them live in poor economic circumstances in their adopted homes and want to blame him for it.

In a speech at his Unity Labour Party’s (ULP) constituency conference in Chateaubelair on Sunday, Gonsalves invited Vincentians to “see with your eyes” what his government has done during its 19 years in office.

“Don’t bother with the propagandists from the NDP and the internet crazies,” who is seeking an unprecedented fifth consecutive term in office.

“Yo’ have some internet crazies overseas living miserable lives and all they could think about that the man who is responsible for their miserable lives in New York, Toronto, Washington, or London is Ralph.

“And you know what they want to do? They want to move from an internet crazy to your excellency. The number ah them wah be ambassador now that Ralph and the Unity Labour Party make the prestige of St. Vincent rise to the stage we are now on the Security Council, the smallest country ever in the history of this world. Look with your eyes,” he said.

But some of Gonsalves’ critics have noted the contribution, via remittances, to the Vincentian economy of overseas nationals — including “internet crazies”.

In 2017, according to World Bank data, US$42 million in remittances was sent to SVG.

This was significantly higher than the other Caribbean countries for which data was available, including other members of the Eastern Caribbean Currency Union:

In Sunday’s speech, Gonsalves said he is satisfied that the ULP has a solid record on which to run.

“We have the quality leadership to continue our progress going forward, we have candidates of the highest quality, we have a vision, policies and programmes fit for the purpose of sustainable development in the interest of all the people of St. Vincent and the Grenadines and we have the organisation to support the leadership, the candidates and to carry forward the vision, the policies and the programmes because we have demonstrated to you before, over the last 19 years, that we have the capacity to deliver in your interest.”

He said it has been said by persons “who clearly have amnesia, people who are blind to reality” that nothing has happened in SVG for the last 19 years.

“Well, when a man says a thing like that, you know that to himself he is a complete liar and does not acknowledge it because the falsity of such a statement is so clear.”

The prime minister said that if one takes a bus from Kingstown to Fancy, driving along the windward coast or through the interior, or along the Leeward Highway, the progress under his government is clear.

“The first which strikes you is that St. Vincent and the Grenadines is far clearer than it ever was before,” he said, adding that garbage is now collected across the country, unlike before 2001, when garbage was collected only in the capital, Kingstown, and its environs.

The prime minister said the housing stock has improved across the country, adding that this is not to say that there are not some people who need housing assistance.

He said that where there were shaky and dangerous bridges, the country now has solid structures, and bridges in places where they previously did not exist.

He spoke about the bridge over the Rabacca Dry River, which his government built in 2007.

“I am not asking you, Comrades, to listen to what Ralph is speaking. I am talking to you that you can use your eyes to see what is before you.”

He also mentioned universal access to secondary education, adding that his government has built secondary schools all across the country.

He mentioned health facilities, including the smart hospital in Chateaubelair, and the polyclinic in Buccament Bay, Mesopotamia and Stubs, the Modern Medical Diagnostic Centre in Georgetown, as well as improvement to the Milton Cato Memorial Hospital, rebuilding of the mental hospital, the temporary facilities, at Stoney Ground, to accommodate residents of the Lewis Punnett home until it is refurbished, and the Home Helper for the Elderly programme.

“See with your eyes nearly 5,000 persons every single month lining up to get public assistance. Not $50 but $275 if you’re over 65 years of age,” Gonsalves said.

“Anytime you hear an NDP man or woman say anything to the contrary, ask them if they blind,” he said, as he also mentioned new police station and improvement in information communication technology.

The number of vehicles have quadrupled over the 2001 number – 8,000 — the prime minister said.