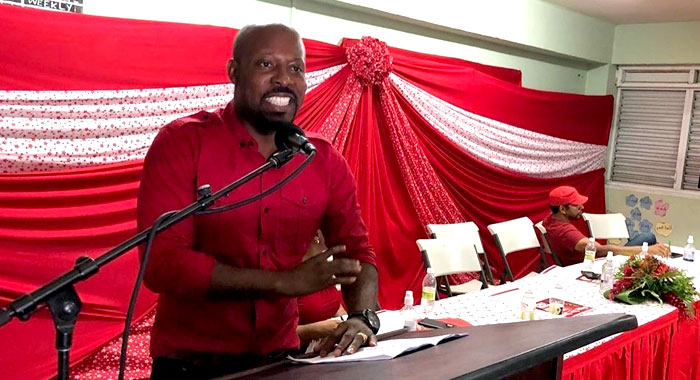 The Unity Labour Party administration has spent over EC$30 million on infrastructural development in North leeward, Carlos James, the party’s caretaker for the district said on Sunday.

James, a senator, who is poised to be the party’s candidate in general elections later this year, said that when he took up the mantle, the constituency “was at a difficult stage in its development, with a lot of challenges and limited resources nationally to deal and combat with the effects of climate change”.

He said that North Leeward was hard hit and the government set out on a period of rehabilitation.

He said he calculated a list of things done in the constituency, most of them remedial work.

James listed the Cumberland Bridge and river embankment project for EC$13.5 million, three bridges in Sharpes, Plan, and Kakarta, –EC$ 4.2 million with the support the government of Ecuador; English and German Gutter in Troumaca, EC$3.2 million; the Coulls Hill road and the teacher’s house in Troumaca that now houses the village council — over $250,000.

He also mentioned phase 1 of the Golden Grove rehabilitation programme, which, along with phase 2 of, combined with the Chateaubelair Bridge is EC$1.5 million; the satellite warehouse in Belmont — EC$965,000.

Phase 2 of road rehabilitation in Spring Village, Rose Bank, Chateaubelair, costing over EC$250,000, will resume this year, James said, adding that the

He said the government spent EC$6.4 million at Long line and the jetty in Chateaubelair will cost EC$5 million

James mentioned the expansion of the road in Belle Isle and said that the government will put the framework in place to ensure there are better roads in North Leeward with some EC$2.6 million earmarked for this.

“And if anybody here had a calculator, you will naturally see that over $30 million was spent in this constituency in the last five years,” James said.

“That is the type of work and commitment that this government, including myself, we have for the people of North Leeward in particular.”

James said that the constituency has gone through some challenging times.

“All of you have experienced it. You have seen what disasters could do to rural communities.  You have lived it first hand. You have had the experience of waking up with no bed, no stove, no fridge. This government replaced that. You have woken up with no house and roof over your head, this government has provided that both in Fitz Hughes and Cumberland.”

He said there are “comrades” who would say not enough is being done in North Leeward.

“When I tell you about all these projects, there are constituencies with elected members who don’t have that kind of money being spent in their constituency and we are delivering that here in this constituency because the people of North Leeward, you are important and we see and we want to make your lives more valuable and improve on your lives and put you in a comfortable position.”

He said that with the remedial work completed, the constituency has gone past the most challenging time in its history with the disasters it has had to deal with.

James said he and the government were “burdened” with the task of reconstruction.