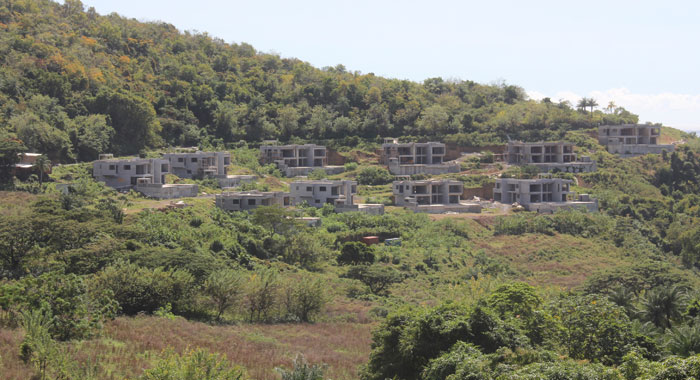 Canadian investors, PACE Developments, are yet to complete any part of Black Sands Resort at Peter’s Hope, three years after breaking ground.

At the ground breaking ceremony in February 2017, the investors had indicated that the project would have taken 24 to 30 months to complete.

However, almost three years on, the project is not ready to receive guests, and, based on the latest information, from Minister of Tourism, Cecil McKie, it would be a further five months before it is.

In Parliament, on Wednesday, Opposition Leader Godwin Friday asked McKie what is the status of the hotel project and, in particular, why has the work been delayed.

The opposition leader also wanted to know when the project is now likely to be completed.

McKie began his response by noting that the project is financed 100% by PACE Development SVG Inc., and, is therefore, completely a private sector project.

He, however, said that the government carries out oversight through the Physical Planning Department which has to give approvals in keeping with standard construction procedures.

The tourism minister said that the project is being done in three phases, the current phase being the construction of 10 villas, each with five rooms.

McKie said that the government has been advised that the Physical Planning Department has indicated that while they consider the pace of construction to be slow, the infrastructure of the villas meets international standards.

The minister said that phases 2 and 3 will see the construction of a hotel block, consisting of a further 350 rooms.

This will commence when the villas are completed with phase 2 being the construction of 150 of the remaining 400 rooms.

The minister said the government has been advised that this phase will be completed in 14 months.

“We have also been advised that the project took a break for the Christmas season and that work will recommence on the villas by the end of this month — that is, next week — and will be fully completed utilising 100 workers, all of whom are local.”

The minister said the concrete structures of the villas have been completed, save for the finishing and this government has been advised that they should be fully completed by June this year.

He said that the restaurant, bar, convention centre and walkways will also be completed by the end of this year.

Ask, if, having seen the villas, he thinks that the June completion date is feasible, the minister said:

“Like all projects, we expect that there may be overruns but those are the dates we have been given and we have been assured that second phase with the hotel block would move at a quicker pace than the construction of the villas, which were 10 separate buildings.”

At the ground breaking ceremony, Member of Parliament for Central Leeward, Sir Louis Straker had said that the resort, along with his government’s other plans for the area, would make the constituency the “mecca of tourism” in St. Vincent and the Grenadines.

Speaking to iWitness News on the sidelines of the ceremony, Joseph Romano of PACE Developments had said that his company had, in hand, half of the $60 million that the construction of the project was expected to cost.

“There is no mortgage on the property. Cash was paid and we have a large chunk to start the service,” he told iWitness News. The resort is being built on 36 acres of land on a former agricultural estate. The company paid the government EC$7 million for the land.