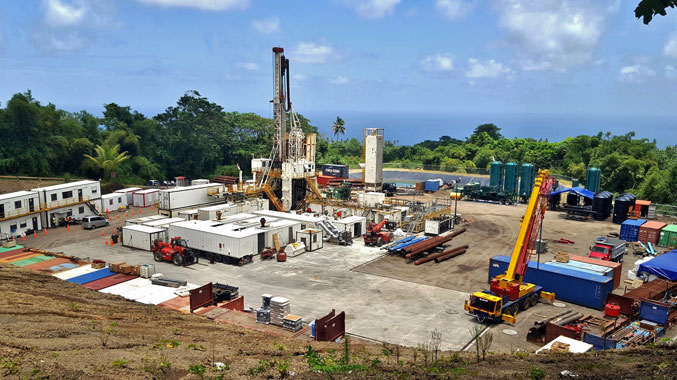 None of the three wells dug as part of the geothermal energy project have the level of permeability required although they have registered the temperature necessary for the production of electricity.

“The conclusion in all of this as provided by the technical persons is that although the results in relation to the permeability have not gone favourably due to the very tight fractures that have limited the permeability, the tested temperatures on the wells were adequate for geothermal power,” Prime Minister Ralph Gonsalves told Parliament last Wednesday.

The prime minister said that the technical team will exhaust all options of well stimulation in an effort to open the fractures on the three wells and improve permeability.

He said that the technical team is optimistic that following the successful stimulation results of the well SVG 03, “they are hopeful that the others will be similar and in addition, strengthen the stimulation in 03”.

Gonsalves’ comments came as he responded to a question from MP for West Kingstown, Daniel Cummings.

“It is a matter of public record that your highly optimistic statements on the success of the geothermal drilling program currently in progress at Bamboo Range, and the prospects for geothermal energy production in general are at odds with the reports that the Vincentian public has heard from the technical experts who are conducting the drilling.”

He, therefore, asked the prime minister to advise, based on the technical reports and analyses that have been submitted by the drilling scientists, the depth to which, respectively, the first and second wells were drilled and whether the permeability of each completed well provides suitable flow for the delivery of geothermal power.

Cummings also wanted to know the geothermal power capacity in megawatts that can be expected to be delivered from that well based on the flow of geothermal steam that has been encountered at the bottom of each well, and the cost of drilling the first well.

In response, Gonsalves said he did not take it as a matter of record that his statements on the geothermal drilling programme are at odds with the reports from the technical people.

“Just last year, when the honourable member was not present, I provided all the details, which I would provide again,” Gonsalves said, adding that the only detail that was missing was the cost of each well.”

Gonsalves said that as of Dec. 31, 2019, the project has spent on drill pad and water intake preparation, US$3.974 million in grant funding.

The drilling cost stood at US$21.5 million, made up of a grant and contingent grant. The contingent grant will be a low-cost loan — if there is a geothermal source from which electricity can be generated; technical assistance drilling of US$792,000 from the government of New Zealand; Project development cost — from 2013 to 2019 — of US$5.98 million from the equity partners, Reykjavik Geothermal and Emera, and project management from April 2019 from the government of St. Vincent and the Grenadines, of US$650,000, for a total of US$32.49 million.

Gonsalves said that no money from the Abu Dhabi Development Fund has been used because those funds are available post-drilling.

Due to unstable formation in the well, at 900 to 1,668 metres, a lot of reaming and cleaning was necessary, Gonsalves said, adding that after reaching 2,700 metres, it was necessary to correct the inclination of the well.

The well was very unstable at 1,880 to 1,890 metres and collapsed, often leading to stuck drill pipefor two days and a lot of cleaning and reaming.

The well then collapsed at 1,889 metres.

The total cost of drilling this well was US$7.71 million and the temperature measured at 1,880 metres was155 degrees Celsius.

The prime minister, speaking of the planned actions, said that the technical team is of the opinion that there are still possible actions that can be taken to make a useful well.

Hence, the drill will return to the well and drill a side track path from 1,800 to 2,700 metres then stimulate for permeability.

The well collapsed at 1,627 metres, then the well was side-tracked from 1,160 metres and went down.

He said that the temperature at 2,800 metres was 220 Celsius and there was low permeability and calculation of power capacity will be determined during the well testing stage.

The planned action is continued stimulation with increased pressure to open fractures and increase flow capacity.

Speaking of the challenges, Gonsalves said: “Despite intensive stimulation on well head, pressure and airlifting, very little permeability has been measured.”

The well cost US$5.62 million, including stimulation.

“The well has shown the highest temperature measured at 230 degrees Celsius and calculated to about 250 degrees.”

Regarding the next steps, Gonsalves said that given the disbursed budget to date and the opportunity cost, the management of the St. Vincent Geothermal Company Ltd. (SVGCL) has discussed with the Caribbean Development Bank and the SVGCL board that all efforts should be made to all wells for geothermal production.

In light of this, the rig will be moved back to SVG01 and rectify the collapsed well by side tracking. This well will be stimulated using a downhole packer, which allows the casing to be sealed downhole at 1,700 metres, thus allowing pressure to be applied beyond 1,700 metres, resulting in an increased pressure on the formation, Gonsalves said.

He said that given the success of stimulation of SVG01, the rig will then be moved to SVG03, where the procedure will be repeated using the packer.

The prime minister said that the drill rig would be released after well stimulation and testing will commence after the testing equipment is installed on site.

After all testing, the well capacity will be known and the economic analysis updated, sometime around July 2020.

Gonsalves said: “… the very manner in which the project was formulated was predicated on the clear idea that a geothermal drilling project is risky and is capital intensive”.

He said that is why, as a first step in mitigating risk, there was an extensive surface exploration undertaken by Reykjavik Geothermal.

The prime minister said that all the decisions relative to choosing that particular area had to do with all the technical preliminary work that was done.

“And it was indicated that that was an area roughly with about a geothermal source of about 60 megawatts.”

He said the government, in the drilling phases, attempted to mitigate their risk by taking 20% of the company “so that we will not bear undue risk during the geothermal exploration itself”.

Gonsalves said that the government had indicated that in the post drilling phase, it would seek to ramp up its ownership and did so, and now owns 49% of the company.