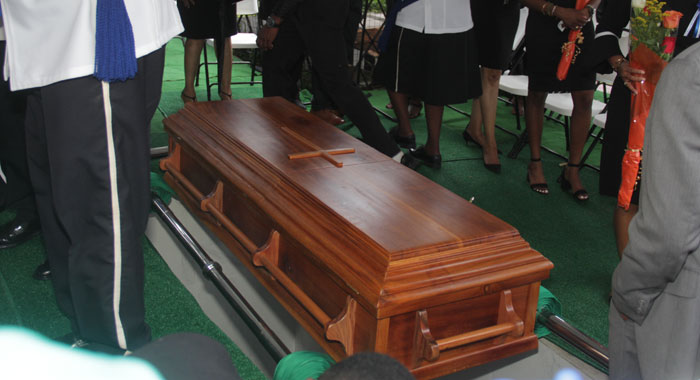 The beautifully constructed breadfruit board casket was built, in keeping with Sir Frederick’s wishes, by his long-time friend, Oscar Cadogan, a carpenter, and the joiner’s son, Clous Cadogan. The Rose Place artisans used breadfruit wood that had been cured for 15 years. (iWN photo)

The body of former Governor-General of St. Vincent and the Grenadines, Sir Frederick Ballantyne was buried in an existing tiled underground tomb, at the Kingstown Cemetery, Wednesday evening, after a funeral service at the Methodist Church in the city.

Sir Frederick was laid to rest in a casket made of 15-year-old cured breadfruit wood, which was beautifully crafted by his long-time friend, Oscar Cadogan, a carpenter, and the joiner’s son, Clous Cadogan.

The former head of state, a cardiologist, who died at his home on Jan. 23, at age 83, had made the arrangement with his friend to be buried in a type of coffin that, in decades past, was reserved for the poorest classes of Vincentians, but had long fallen out of use.

At the cemetery, mourners jockeyed for positions to get a glimpse of the casket after the national flag in which it was draped was removed.

Some commented about the quality of the craftsmanship and the effort that the carpenters might have put in to realise the type of finish on the casket, which was coated with clear varnish, preserving the natural beauty of the wood.

And while Sir Frederick was buried in a type of grave that speaks to the level to which he had risen in Vincentian society, many elements of the funeral reflected the close connection that Sir Frederick attempted to maintain with the people of SVG, although he had risen to the highest office in the land.

iWitness News understands that the tomb was built in August 2019, for the funeral of former Minister of National Security, Sir Vincent Beache, who, like Sir Frederick, was also accorded a state funeral.

Sir Frederick’s tomb is located next to Sir Vincent’s.

The former governor general’s tomb was sealed with three concrete slabs and silicone, with only sprinkles of dirt — reportedly taken from his home town of Layou — thrown onto the lowered casket, during the part of the funeral when his body is committed to the ground.

Wednesday’s funeral did not include a eulogy, a prominent feature of many funerals today.

However, spoken there were tributes by Marcus Ballantyne and James Walker-Ballantyne, two of Sir Frederick’s sons, and a song (His Eye is on the Sparrow) by Beth Satchell, one of his daughters.

Methodist preacher Monty Maule fulfilled Sir Frederick’s wish to have him deliver the sermon at the funeral.

In the earlier parts of his sermon, Maule’s sermon — which was 36 minutes long — Maule said Sir Frederick had chided him for delivering too long a homily at Sir Vincent’s funeral last year.

Meanwhile, in his tribute, Ballantyne described his father as “a man of love”, adding that the genesis of love is in God and whoever lives in love lives in God.

He noted that Jesus said that the greatest commandment is to love one’s neighbour as oneself.

Ballantyne said that as a physician, his father impacted the lives of numerous people.

He said that Sir Frederick was passionate about medicine, “helping to heal the sick and bringing comfort to the suffering”.

Sir Frederick was instrumental in creating a volunteer programme where doctors in almost every medical field have provided free medical services to the people of SVG for over 30 years, Ballantyne said.

“It is a programme that is on-going to this day,” he said, adding that Sir Frederick was instrumental in bringing the World Paediatric Project to SVG.

Through the project, children in SVG and from across the region can access free critical care that might not otherwise be available to them.

Ballantyne said that Sir Frederick was instrumental in expanding immunisation programmes to ensure that all school children in SVG were vaccinated.

“Despite being honoured, our father never sought recognition for his work. Instead, with humility, he lauded colleagues and employees who worked with him, the family members who supported him, the members of government who embraced him and his causes and the doctors who selflessly contributed to humanitarian efforts,” Ballantyne said.

“From his humble beginnings in rural St. Vincent and the Grenadines to his ascension as governor-general and even on to death, Sir Frederick lived a life of humility.

“As you may know, he chose a simple coffin made of breadfruit wood as his final resting place,” Ballantyne said at the end of his tribute.

Meanwhile, in his tribute, Walker-Ballantyne said that Sir Frederick had “the unique ability to uplift others and help the less fortunate.

“He could see the potential in others and propel them to excel.”

He said that many of the mourners know Sir Frederick as an avid sailor and fisherman.

“He loved the seas and he embraced others who had the similar interest,” Walker-Ballantyne said.

He told a story of how Sir Frederick had once approached a junior cook in the kitchen of Young Island (a resort island that Sir Frederick owned) who worked on the boats and had a keen interest in sailing.

Walker-Ballantyne said that the cook now owns a boat, adding that there are numerous other stories where Sir Frederick saw the potential in others and was the catalyst for propelling them forward.

“Our dad inspired many and motivated all. He did so quietly and unassumingly. Indeed, our father taught many of us how to fish, literally and figuratively.

“Did you know you catch more fish while playing Bob Marley?” Walker-Ballantyne said, adding, “Dad would say this is tested and proven.”

Walker-Ballantyne said that just the day before the funeral, Sir Frederick’s friend, Dr. Brian Clair was experiencing “a drought” on his way back from Mustique.

He put on some Bob Marley music and almost immediately there were four strikes and four fish were caught, Walker-Ballantyne said.

He said that Sir Frederick wanted his children to excel and that education was paramount.

“Dad believed that education was critical for establishing a foundation of self-sustainability and success. He not only educated all his children and continues to do so, but he selflessly facilitated the education of others, quietly from his personal resources.

He added: “Many people want to live ordinary lives but others want to be extraordinary. Our father lived an extraordinary life, yet he did so with love for others and in humility. He was always working to better himself and those around him. He always wanted everyone to live their best lives ever and he certainly lived his.

“Everyone who knows our father and those who were close to him has heard these words: ‘Don’t address your mind to that.’ He has always had a plan for everything and didn’t want anyone to worry. If you were speaking to my father today, he would say, ‘Don’t address your mind to the fact I am gone. I am now in a better place. I have left this sojourn but my legacy of love for humanity would endure through my children, my family, my friends, and my people, the people of St. Vincent and the Grenadines.”

After his brother’s tribute, Ballantyne returned to the podium and said, “Dad, we love you, we’re gonna miss you.”

Ahead of Wednesday’s funeral, Sir Frederick’s body lay in state at the House of Assembly from 10 a.m. to noon for viewing by officials and members of the public.

Ahead of the funeral service, there was an hour of public viewing at the church, during which there were musical tributes by Rick Mc Donald, the Royal St. Vincent and the Grenadines Police Force Band, Trinity University Orchestra, Resonance, New Kingstown Chorale/Cantemus

He was succeeded by Susan Dougan, a retired educator and former Cabinet Secretary, who took up office on Aug. 1, 2019.