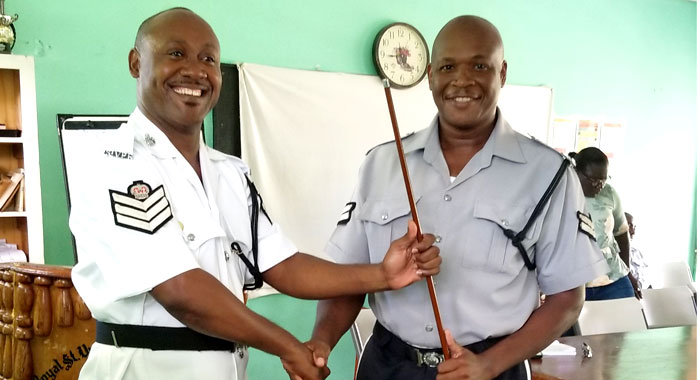 Corporal Lez Harry is the new chairman of the Police Welfare Association.

He was ratified in the post on Feb. 6, after elections held in late January, the Police Public Relations and Complaints Department said in a statement.

Harry succeeds Station Sergeant Brenton Smith, who chose not run for re-election, saying he wanted to make way for young persons with fresh and new ideas.

Harry has 23 years of service as a police officer and served on the executive for the past three years as chairman of the Intermediate Branch Board.

He said it is going to be a mammoth task to fill Smith’s boots, adding that rather than trying to do so, he will build on the tremendous work of his predecessor.

Harry thanked Smith for his contribution and said he served the organisation with distinction.

He assured the membership that his new executive will work hard and do their best, adding that great things, therefore, are to be expected.

He implored the general membership to support and work hand in hand with the executive as they chart the way forward.

The new chairman said that his executive will foster and forge a good working relationship with the hierarchy of the Royal St. Vincent and the Grenadines Police Force.

In a Dec. 28 speech at the annual police awards dinner, the outgoing head of the Police Welfare Association (PWA) warned his successor to be prepared for betrayal by his or her executive, accusations of being a political operative, and to avoid the word “storm”.

“To the new chairman, leadership is not about power, but rather to serve your members selflessly. You must have love for humanity, whether it’s to provide financial assistance, corresponding with doctors and hospital administrators directly, your task, as chairman, will not be an easy road,” Smith said.

He added: “However you must possess strength, willpower and be able to withstand the pressure that will confront. Fight for the well-being of your members…”

Four persons were nominated to contest for the three posts on the Senior Branch Board with Sergeants Daniel Prescott, Marilyn Burke and Rochelle Smith emerging as the representatives for that branch.

Sergeant Rochelle Smith was selected as chairperson of the Senior Branch, Corporal, Harry as Intermediate chairperson and Cummings as Junior Branch chairperson.

Constable Somorow Quashie was appointed as the General Secretary.

The elections were held on Jan. under the supervision of the Superintendent of Police, Kamecia Blake-Byam, the officer in charge of the Central Division.