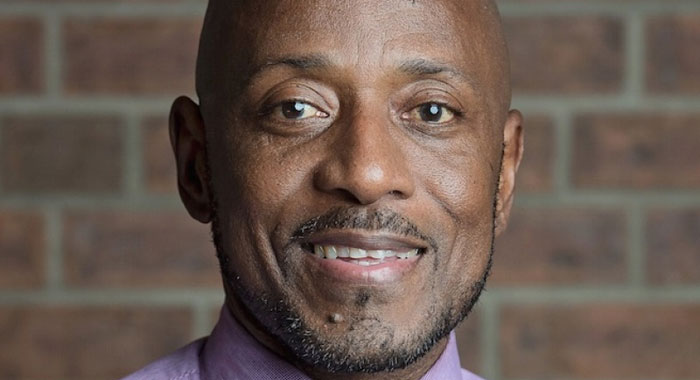 Supporters of the main opposition New Democratic Party (NDP) in East Kingstown have nominated economist and former diplomat Dwight Fitzgerald “Fitz” Bramble, 52, as its candidate in the next general elections.

NDP President and Leader of the Opposition, Godwin Friday made the announcement at a press conference in Kingstown on Tuesday.

He said that Bramble’s candidacy has to be ratified by the party’s central executive.

Friday said he sees no reason why the party’s highest decision-making organ for candidate selection would not give the former national goalkeeper the nod of approval.

“I am confident that the committee will ratify the constituency’s selection and Mr. Bramble will be the new candidate for East Kingstown in the next general elections,” Friday said.

“The NDP continues to attract talented and committed people as candidates and to fill other roles on behalf of the party.

“We welcome everyone with open arms to join us in changing the Government so that we can change the country for the better. I have full confidence in our people and look forward to serving them in government.”

The ratification meeting will take place “soon — in a matter of weeks”, Friday said.

He said the meeting is also expected to ratify the candidacy of Chieftain Neptune, the party’s candidate for North Central Windward, who will run against Prime Minister Ralph Gonsalves, who has been representing the district for a quarter-century.

In making the announcement, Friday noted that former prime minister, leader of the opposition and NDP president, Arnhim Eustace, an economist, who has been representing East Kingstown since 1998, has said he will not seek re-election.

“He served that constituency for many years with distinction and will, in due course, be properly honoured and recognised for his service,” Friday said.

According to Bramble’s LinkedIn profile, he is the Economic Development Coordinator for Estevan, the eighth-largest city in Saskatchewan, Canada, a post he has held since September 2017.

He was Minister Counsellor/Deputy Chief of Mission at the Embassy of St. Vincent and the Grenadines to the United States, based in Washington D.C. between October 2000 and May 2005.

Between June 2005 and May 2011, he was the highest-ranked member of the OAS General Secretariat in Suriname.

Bramble worked as Senior Projects Officer in the Ministry of Finance, Planning and Economic Development.

In 2005, Searchlight newspaper said Bramble has “distinguished himself as a diplomat with extensive experience in bilateral and multilateral diplomacy”.

Bramble emerged from among a field of four potential candidates.

Once his candidacy is ratified, he will be poised to run against Minister of Health, Senator Luke Browne of the ruling Unity Labour Party.

Browne, 35, had failed in attempts in 2010 and 2015 to unseat Eustace, while he had eroded the former prime minister’s margin of victory.