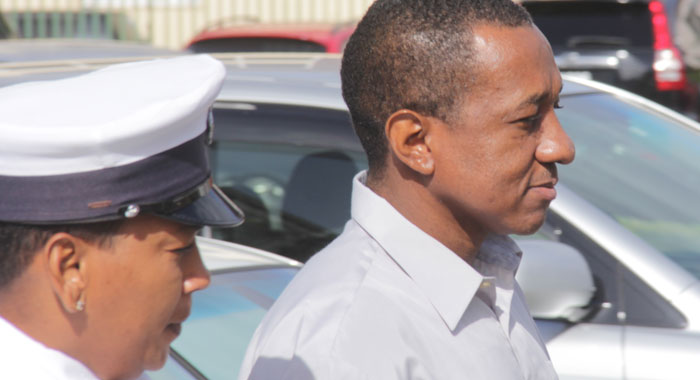 Lionel Hoyte, right, is escorted back to prison after pleading guilty, on Wednesday, to murder. (iWN photo)

A former police officer, on Wednesday, pleaded guilty to the 2013 murder of his former partner and mother of his then 8- and 3-year-old sons.

Lionel Hoyte pleaded guilty, at High Court No. 1, in Kingstown to a charge that on April 29, 2013, at Lodge Village, he caused the death of Helen Renita Fox, 36, by an unlawful act.

Fox’s body was found in her bed with multiple wounds and the throat slashed.

Hoyte had already quit the police force when he committed the crime.

He told the court that there are a few persons that the defence would like to ask to attend court.

The lawyer said he would need three to four weeks to arrange this.

The lawyer further said he would be relying on the report of Dr. Ermine Belle.

Dr. Belle was a psychiatrist at the Mental Health Centre between March 2017 and November 2018.

“I don’t know if it would be useful to have Dr. Belle present. I don’t know is she is in St. Vincent,” the lawyer told the court.

He also said that a social inquiry report that had been filed would be useful for the sentencing.

Tamika McKenzie appeared for the Crown.