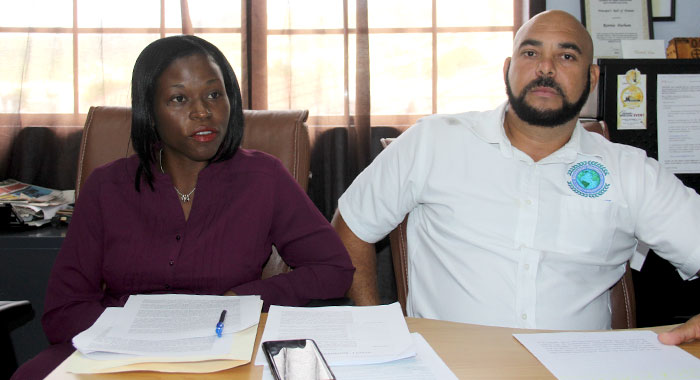 The Balcombes at Feb. 10 press conference where they made the claims of unfair treatment. (iWN photo)

The Ministry of Finance, on Thursday, responded to the Feb. 10 allegation by construction firm, Bally and Bally Investments Ltd., that it was treated unfairly when its bid was deemed unresponsive.

“Bally and Bally’s claim that the winner bidder was given an unfair advantage is false,” the statement said.

The company’s tender for the “Coastal Defence Works: San Souci” was deemed unresponsive because the bid security was missing a signature.

The company, citing a government document, said that the winning bidder, the joint venture of Kelectric Company Limited and Belvedere Place Development, was allowed to make substantive changes to their bid before being awarded a contract.

Bally and Bally said that both companies should have been disqualified or equally allowed to make the requisite adjustments to their documents.

However, the ministry, referring to the document that Bally and Bally cited, said that the Secretary of the Tenders Board, by internal memorandum, wrote to the Director of Economic Planning seeking several clarifications on the Bid Evaluation Report submitted to the Tenders Board with the recommendation to award the contract.

“Bally and Bally obtained a copy of this correspondence and came to his conclusions. At no time was the winner bidder requested to supply any information contained in the memorandum from the Secretary of the Tenders Board.  All the required information was contained in the bid submitted … which was received at the stipulated deadline date,” the ministry said in its statement.

‘akin to an unsigned cheque’

The press statement said that Bally and Bally did not sign an important bid document.

“This is a fundamental oversight, akin to an unsigned cheque or an unsigned contract,” the ministry said, adding that the company was notified that the missing signature made the bid unresponsive.

The ministry further stated that the construction firm claimed to be in partnership with another entity in its bid, “but failed to provide any documentation establishing a partnership, joint venture, or any other relationship with that entity”.

The response by the ministry came two days after Leader of the Opposition Godwin Friday, spoke to the issues that Bally and Bally had mentioned in their media briefing one week earlier.

The ministry said that in his press conference, Friday “made claims of ‘gross unfair[ness]’ and ‘retribution’, while suggesting that the objections raised by Bally and Bally may ‘raise serious questions again about the tendering process in SVG’.”

The opposition leader had noted that in 2019, the Caribbean Development Bank (CDB) had declared misprocurement in the tendering process for the contract for the Yarabaqua River Defence Project.

The CDB declaration came after an independent review triggered by Bally and Bally’s objection to the award of the contract to Reliable Construction, another Vincentian company.

“Notwithstanding the fact that the CBD upheld Bally and Bally’s complaint and found the breach serious enough to withdraw funding from the project, the Government disregarded the complaint and the CDB’s reaction and has gone ahead with the project and the non-compliant contractor.  Taxpayers will pay for that,” Friday said.

Friday noted that in the current situation Bally and Bally’s bid was rejected apparently because of an unsigned bid security, and that the company further alleges that the successful bidder omitted pertinent information to meet and to complete the technical aspects of the bid but was given the opportunity to provide such further information to become compliant.

“If this is so, it would be grossly unfair to Mr. Balcombe and his company and to other bidders for the contract,” Friday said, adding that his understanding is that the World Bank, which is funding the project is investigating the claim by Bally and Bally.

“If the complaint is found to be well-founded, this would raise serious questions again about the tendering process in SVG,” he said.

“I am asking now, if the signature on the security document was all that was required, why was Bally and Bally not allowed to sign the document?  Surely, the company’s intention to provide the required security was evident in the bid.

“Is this retribution against and punishment of the company, as Mr. Balcombe believes, for its role in exposing the Yarabaqua River Defence bidding fiasco that led to the CDB withdrawing its financing from that project?”

The opposition leader said that it is important that the matter be properly investigated “to find a just and fair solution and also to restore the integrity of the tendering process in SVG.

“Remember the tendering process is not here for decoration or just for fairness to the bidders who are involved in a contract. It is there to ensure that the people of St. Vincent and the Grenadines get best value, the most reliable work for its money. That’s what it is there to do,” he said.

“And so, it’s very important that when serious complaints are raised that they are properly investigated and they are resolved in a way that is in the public interest and is fair to all the parties involved in the bidding process,” he further stated.

Responding to a question, Friday said that if the tendering process is found to be flawed, it could affect the government’s ability to attract funding from multilateral institutions and governments that lend money.

“… you don’t create any doubts about the tendering process as to why one company was favoured over another when they may not have met the requirements,” the opposition leader said.

He noted that the governments of Britain, Australia and the United Kingdom recently suspended funding for the Commonwealth Secretariat over issues relating to tendering.

“In other countries, they take these things very seriously because it’s public monies. And when you get money from another government or from a multilateral institution, you know that are lent to St. Vincent, we have to make sure that they are used effectively, which is where the tendering process comes [in]; capable persons at the best possible price and they execute the project. And that is how it ought to be done,” he said.

He said any “well-founded” complaint about the tendering process not being as the law intended has to be investigated.

“And remedial measures have to be put in place. You can’t just simply spite or dismiss the person who brings the complaint. When there is wrongdoing, you basically should be, you know, recognising the contribution made by those who expose it; not treated as you’re saying well, you know, you shouldn’t have brought this to light,” Friday told the media.

In its press statement, the Ministry of Finance said that precision is important in the process of tendering for large contracts, particularly those funded by multilateral entities like the World Bank, European Union and the CDB.

“Many bids are disqualified for failure to strictly comply with the procedures set forth in law or the procurement guidelines of the funding agency,” the ministry said.

It said that the government applies these laws and guidelines “in an even-handed and transparent manner, in collaboration with the funding entity.

“The process is free of political influence or interference. It is regrettable that the Honourable Leader of the Opposition would malign the work of the Tenders Board and the Ministry of Finance and Economic Planning in this manner, without fully understanding the facts underlying Bally and Bally’s complaint.”

The government noted that dissatisfied contractors are entitled to challenge contract awards.

“The existence of a challenge, or its consideration, is not evidence of an unfair or vindictive procurement process,” it, however, added.

“Indeed, as the Government puts increasing numbers of large capital works out to public tender, it anticipates increased numbers of challenges by disgruntled contractors. This is how the system works.

The press statement, however, said that in the Jan. 3, 2020 letter notifying Bally and Bally of its unsuccessful bid, Balcombe was given 14 days — until midnight on Jan. 17, 2020 — to challenge the decision of the Tenders Board or to seek a debriefing meeting with the Economic Planning Department, the procuring entity.

“Bally and Bally did not challenge the bid until one week after the deadline, on 24th January, 2020,” the ministry said.

Work is ongoing to bring these laws into effect by June this year, the statement said, adding that before the end of the first quarter, the Ministry of Finance will be actively engaging all stakeholders in the public and private sector in training and sensitisation sessions on the new procurement laws to ensure contractors and the like understand their rights and obligations.

In addition to clearly outlining procedures for procurement methods, the laws introduce strong provisions for integrity and ethics in public procurement along with civil liabilities for breaches by procurement officials and bidders.  We are inviting everyone to attend when the invitations are sent out, the ministry said.