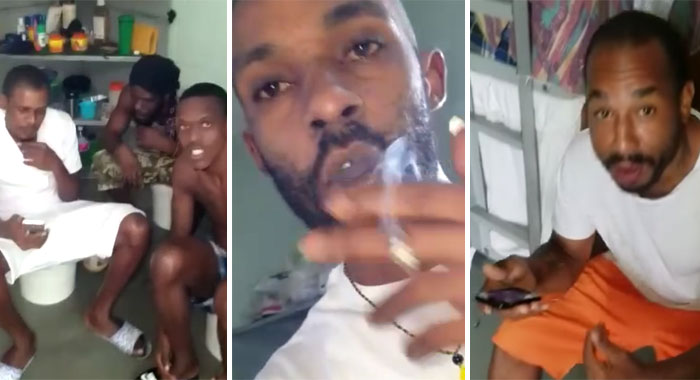 Three screenshots from one of the videos.

Prime Minister Ralph Gonsalves has asked the authorities for a report on possession of prohibited items by inmates after two videos surfaced on social media recently showing inmates smoking what appears to be marijuana and using mobile devices in a cell at Belle Isle Correctional Facility.

“Now, the prisoners were breaking the prison rules. And it’s difficult for me, as a normal, sentient being, normal person, brethren, with senses that you could have prisoners inside of the prisons with cell phones and some prison officers are not colluding,” the prime minister said.

The prime minister said this is a matter which the Public Service Commission, from a disciplinary standpoint, would be expected to deal with.

“I stay in my crease. I don’t deal with the discipline of public servants. I’m the chief executive, I could call the superintendent of prisons, I say, ‘This is a serious matter. You have to investigate this matter’, a similar thing with the Commissioner of Police.”

The prime minister, however, said that while he could get information from the commissioner and superintendent, “what information I get, I may or may not tell you or tell you all of it.

“Because if the names of somebody… — let’s say John Browne’s name is mentioned as a prison warder, who give Ephraim Burke, a cell phone, I can’t tell you that.”

The prime minister, who is also a lawyer and Minister of Legal Affairs, said such information would be “evidence which would be brought either to a criminal court or to an internal disciplinary matter leading right up… in the case of the prison officer to the Public Service Commission.

“So I can’t muddy the water, I can’t pollute the streams of justice, either internally or in the courts by giving you that kind of information,” he said.

Gonsalves said that after receiving and reviewing a report he could then say that  ‘Yes, I’ve read the report and it would appear to me that certain actions would be taken by the relevant authorities in dealing with this matter. But that relevant authority isn’t me because I don’t prosecute,” he said.

He said his role is to go to Parliament and provide the resources to strengthen the prosecuting arm of the state.

Gonsalves said his administration has done so by increasing the staff complement at the Office of the Director of Public Prosecution from three to more than 20.

“So all I could say to you, what I have done, but I have requested and I expect the Superintendent of Prisons and the Commission will send me the relevant reports but they will also know duty in sending those reports to the authorities who will act on them in the requisite manner,” the prime minister further stated.

5 replies on “PM demands report into drugs, phones in prison”