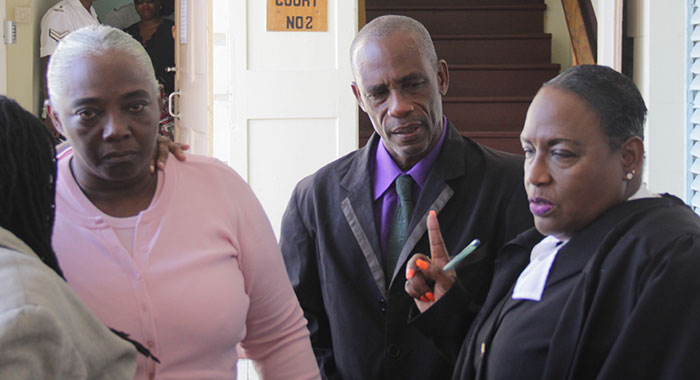 Lawyer Kay Bacchus-Baptiste, right, speaks with her clients outside the court after they were released from custody. (iWN photo)

Opposition senator, lawyer Kay Bacchus-Baptiste has defended herself amidst criticisms over her representing the Morgan family, two members of which the Appeal Court freed last week after overturning their conviction in the 2016 hot water dousing case.

Bacchus-Baptiste, the New Democratic Party’s (NDP) candidate for West St. George said she would bring the same “fighting spirit” to advocate on behalf of constituents.

Preacher Nigel and his wife, Althia Morgan were, on Feb 25, set free while their daughter, Krystal Morgan, 25, returned to prison to complete a reduced sentence, almost two years after they were jailed for grievous bodily harm.

The trio was jailed for four years each in April 2018, when Senior Magistrate Rickie Burnett found them guilty of unlawfully and maliciously inflicting grievous bodily harm on Cuthbert Victory of Caruth Village, Mesopotamia on April 9, 2016.

Mr. and Mrs. Morgan had held Victory as their daughter poured on him a hot liquid from a kettle in the road outside their home in Hopewell, Mesopotamia.

Victory suffered first-degree burns to his back, shoulder, face and chest as a result of the assault.

The decision resulted in much public outcry.

Speaking on her party’s New Times Programme last Friday, Bacchus-Baptiste said she wanted to show “the positive part” of the case.

“I said positive because there is a big outcry by certain persons, because they think the Morgan should be rotting in jail,” she said, adding, “And they are defending, as they think, the so-called victim.”

The lawyer said this is something positive.

“I’m happy about that, because it shows me that our people have a social conscience, and they have a sense of righteousness, and what is, what should be right from wrong. So I am laughing and I’m really happy.”

She, however, said there was “wilful or ignorant misinformation” about the case “that it is amazing”.

The senator said the majority of people do not take the time to read and get the facts.

“They listen simply to what one person say. And they reproduce it,” she said, adding that contrary to what was being said in public the older Morgans never said “bring the thing” and their daughter responded by bringing the kettle of boiling liquid.

“Nothing like that happened in relation to boiling water,” the lawyer said, even as she added that she did not want to go into the details of the case.

“… if persons want to feel justified, and they want to feel that they have a sense of justice and they think attacking me will make them feel so, I am happy. That’s not the issue.

“The issue is they have a sense of justice, which I want to see translated into fighting against sexual harassment. Where’s that sense of justice when Ralph Gonsalves signed a agreement for those teachers and those three NDP teachers resigned based on what he signed, and then they lost their jobs. And for years they could not find employment. Some of them still ain’t find employment.

It was apparent that Bacchus-Baptiste’s comments were not finding favour with Margaret London, the host of the programme, who said she would love to respond but not on the NDP’s programme.

London said that if she were a lawyer she would have breached the code of conduct and suggested that she would not have defended the Morgans.

“Let me tell you something, I do not depend on the public to decide for me which case I should take or not take. It is the exact fighting spirit in me that I am going to use to fight for my people in West St. George that I used to fight for the Morgans. You know why? If I had listened to the rumour of what persons said happened, and the fact that he’s (Mr. Morgan) ULP — it shows the kind of person I am.”

She said that people did not have the information about the case.

“And when the Court of Appeals saw the facts, they had no option. There was insufficient evidence beyond the reasonable doubt — because … Mr. & Mrs. Morgan, none of them through water on anybody. It was Krystal. That is why Krystal is still in jail,” Bacchus-Baptiste said and called on Vincentians to apply the same sense of justice to all Vincentians.

“I’m asking them, don’t be one-sided with it. Let us also for justice for all Vincentians,” she said.

The lawyer and politician added:

“My whole theme here is to show that our — the NDP’s aim is to change the divisiveness in this country to bring back love and caring to end the fact that it matters who you vote for. That should not matter because once politics is over, the government should be the government of all Vincentians.”