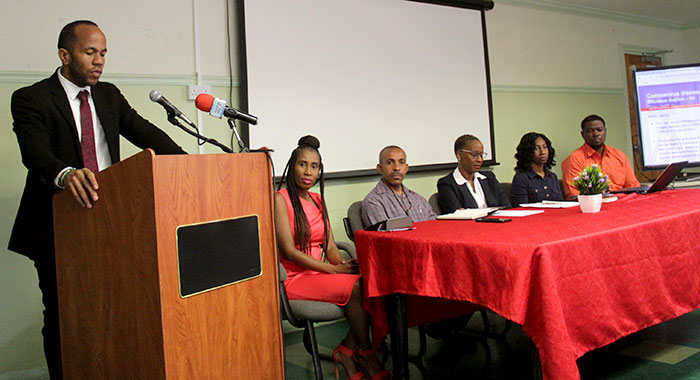 There is “reasonable likelihood” that the COVID-19 virus will reach St. Vincent and the Grenadines (SVG), Minister of Health, Senator Luke Browne told a press conference in Kingstown on Friday.

The virus has already spread to a number of Caribbean countries, including St. Martin, St. Barts, and Martinique, and the minister said his government is prepared for any eventuality.

“St. Vincent and the Grenadines has the capacity, right now, to deal with any case that might arise. So I think that we are tending in the right direction,” Browne said.

“I could tell you, that on a scale of one to 10, the priority that the ministry has given to this thing is at 10 and it’s not at 10 because of the fact that is going to cause people to suffer in a way that is different from, say, the flu or some other infectious disease.

“But it’s at 10 because it gives us an opportunity to reinforce — well, first of all, to strengthen our health system and its capacity, and to reinforce messages related to good hygiene in general. And I think that that has the potential to spill over into our better response and treatment and engagement with other things that might arise from time to time.”

Browne said that the government is putting into place, facilities to test for the virus locally, noting that Dominica is the only Organisation of Eastern Caribbean States nation that has such capacity at this time.

“The cabinet and government consider it to be an urgent matter. I’m hoping that maybe within this month, we might be able to go through all the stages of procurement, bringing on island and being able to carry out tests here,” Browne said.

He said SVG is “not going to be necessarily at a grave disadvantage in the meantime”, noting that in addition to the Trinidad-based Caribbean Public Health Agency, Barbados can assist with testing.

The minister was asked to say, on a scale of 1 to 10, with 10 being the highest, how his ministry ranks the likelihood of a COVID-19 case in SVG.

“Well, I shared my frame of mind earlier, when I said that a gentleman and someone who I respect and who’s learned said that we should be approaching COVID-19 as if it is already here, you know, and that’s what we’re doing.

“I mean, in terms of the likelihood of it coming here, you see that it has penetrated the world. It has gotten to basically our borders, you might say. There’s a reasonable likelihood that we might have a case in St. Vincent and the Grenadines. And that’s why we’re shifting into a mode of being able to detect and manage those cases. I’m not sure what a reasonable likelihood to transmit translates to on your scale of one to 10.”

The health minister said that even as his ministry sees as “reasonable likelihood” that the virus would make its way to SVG, that “isn’t to say that, you know, the world will come to an end, if that happens.

He said that the government has identified a property in Argyle “which I think is this culturally suitable, maybe even a godsend” for use as an isolation facility.

“And we have to do some significant work on it to make it ready. I’m not sure that I could comment specifically on a timeframe, no, but what I could say is that the work has commenced, we are basically on the verge of concluding a lease arrangement.”

Recently, amidst objections by villagers, the government abandoned its plans to convert Evesham Health Centre into an isolation facility, and prime minister Ralph Gonsalves, noted that no one wants such a facility in their neighbourhood.

Browne said that once the isolation facility is completed, the government would move swiftly to having it ready for use should the need arise.

Meanwhile, Chief Medical Officer, Simone Keizer-Beache told the same press conference that her ministry is anticipating being able to house 20 patients at the isolation facility.

There will also be provisions for staff members, she said.

Keizer-Beache, a physician, said that the property could be expanded to accommodate 40 persons.

“However, if necessary, today, we can accommodate two persons with an expansion to 28 persons…  We can manage that until we get to where the facility is ready,” she said.

“So let us not, as the minister would say, panic. But our focus is, yes, readiness because we definitely believe in prevention and readiness as key,” Keizer-Beache said.