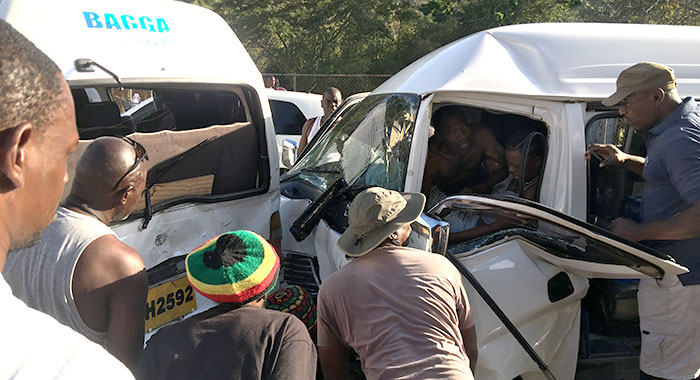 Margaret “Ole Gyal” Smith of Petit Bordel hollers in pain as persons try to free her from the vehicle. (iWN photo)

A woman appeared to have suffered serious injury to her left leg when she was pinned in the front passenger seat of a minivan in Pembroke Saturday afternoon.

The woman, Margaret “Ole Gyal” Smith, 37, of Petit Bordel hollered in pain as civilians and off-duty police officers used various implements in a desperate effort to free her.

The accident included two minivans and occurred mere feet away from the pedestrian crossing near the entrance to Greaves Marketplace, on the Nelson Mandela Highway.

One of the vehicles, H2592, still had its licence plates attached. That vehicle, which had a sign indicating that it plies the Kingstown-Barrouallie route, sustained damage to its rear.

The other vehicle — in which Smith was pinned — was more extensively damaged and did not have its registration plates when iWitness News arrived at the scene.

Both airbags in the front seat of that vehicle deployed, suggesting that the collision was an intense one.

Some persons at the scene commented that the vehicles were “racing” before the accident.

However, a passenger in H2592 said that that van was at a standstill and the other one crashed into it.

Uniformed police officers arrived at the scene a few minutes after civilians were able to free the woman.

A fire truck arrived at 5:18 p.m., some 33 minutes after iWitness News had telephoned emergency services informing them of the accident.

The fire truck is believed to have been dispatched from Kingstown, some six miles from the scene of the accident.

People who were at the scene before we arrived said that police had already been informed before iWitness News arrived.

The injured woman had made national headlines in May 2018, when she was charged with maliciously wounding her goddaughter, Teresha Edwards, 20, also of Petit Bordel, in the North Leeward village on May 14, 2018.

Smith was further charged that on May 14, 2018, at Petit Bordel, she assaulted Leron Green of Petit Bordel, occasioning actual bodily harm.

She was also charged that on the same date and place, without lawful excuse, in a public place, the Petit Bordel Public Road, she had in her possession an offensive weapon, to wit a stone.

Smith is awaiting trial in the High Court in connection with those matters.