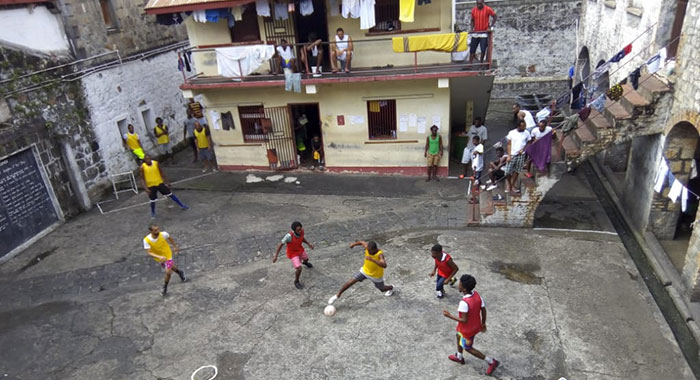 Action in the prison soccer competition.

The Prisons soccer tournament, “Free From The Inside” continued on Friday, with action at Her Majesty’s Prisons in Kingstown.

Star Class 2 defeated Block C 1-0 with Sage John scoring the lone goal. Kimmarley Douglas of Star Class 2 received a yellow card and had to leave the field for two minutes.

In the final game, Block B checked the winning streak of Star Class 1 with a 3-1 trouncing.

Mwatha Henry scored 2 and Richard Francis 1 for Block B, while Acer France scored the lone goal for star class 1.

However, on returning to play after his two-minute suspension, Ryan received another yellow card.

The rules say two yellow cards in a single game is equivalent to a red card and, as a result, Ryan had to leave the field permanently and will miss their next game.

At the end of the day Star Class 3 had 1 point, zero goal, and 1 goal scored against them.

Block C had zero point, scored 1 goal, and 3 goals scored against them.

Star Class 2 had 4 points, 2 goals, and 2 goals scored against them.

Block B had 5 points, 4 goals and 2 goals scored against them.

The competition began on Feb. 29 at the Belle Isle Correctional Facility.

In the match of the day, Block C2 won their game 5-1 against Block B2.

The tournament continued on March 2 with three games.

Shawn George of Block B1 received a yellow card.

In the second encounter, Block B2 won 3-1 against Block D1, with Kyle Bacchus scoring all three goals for Block B 2 while Kareem Abbott scored for Block D 1.

The final encounter was between Block C1 and Block D 2, which ended in a 1-nil win for Block D2.

Noel Miller scored the lone goal of the game.

The tournament moved to Kingstown on March 4, with two games.

In the other game, Star Class 1 overpowered Star Class 3 by 1 goal to nil.

The tournament continued in Kingstown on March 6, with two games.

Meanwhile, B Block and Star Class 3 played to a goal-less draw.

Three games were played at Belle Isle on March 9.

In game 2, Block D2 overpowered Block B2, 2-0, with goals by Alex Alexander and Noel Browne.

The tournament continue in Belle isle on March 11, with Block D 2 defeating Block B1 — 2-1.

Gemel Williams scored both goals for the winning team.

In the second game, Block C1 had the better of Block B2, winning 1-nil with a goal by Jerroy Phillips.

Teams are made up of eight players, only five of whom can be on the field at any one time.

The team can make rolling substitutions, meaning that players can run on and off without the game stopping.

The games are of 30-minute duration, made up of 15-minute halves, with five minutes’ rest in between.

Station Sergeant of Police Meldon James, the founder and coordinator of the initiative, which is supported by mentor Raltie Lowe, a former national footballer who was a member of the celebrated 1979 team.