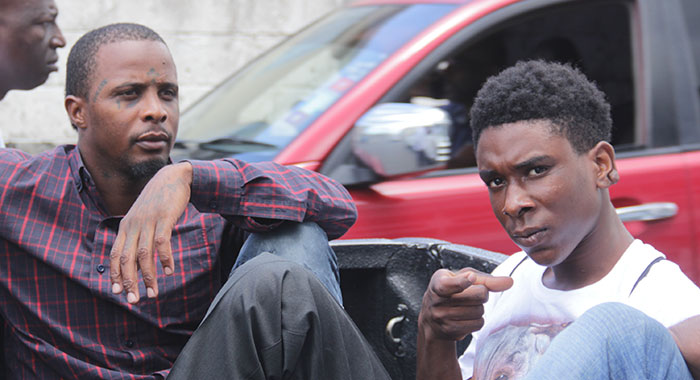 A Campden Park man was, on Tuesday, jailed for three years for three burglaries in Fair Hall and Fountain and being equipped to steal in his home village.

His co-accused, a 19-year-old who is also a first-time offender, was given a suspended jail term.

Senior Magistrate Rickie Burnett handed down the jail sentences on Darren Bobb, 32, while his co-accused Gosnel Gideon Greene, 19, was given a chance to turn his life around.

On Monday, at the Kingstown Magistrate’s Court,

Bobb pleaded guilty to a charge that on Feb. 24, at Fountain, he entered the dwelling house of Shawn Browne, of Fountain, as a trespasser and stole a number of items valued at EC$1550, Browne’s property.

The stolen items including a 16-inch HP laptop, a 10-inch Amazon 7 tablet and one black ZTE cellular phone.

Green pleaded not guilty and Bobb pleaded guilty to a charge that on March 9, at Fair Hall, they entered the dwelling house of Paul Kirby of Fair Hall, as trespassers, and stole a number of items valued at EC$3,545.07.

The stolen items included a two cellular phones and a Dell laptop computer.

Bobb and Greene pleaded guilty to a charge that on March 10, at Fair Hall, they entered the apartment of Nona Liauw-A-Joe, of Fair Hall/The Netherlands, and stole a number of items, including a laptop computer, valued at 1,700 euros, a cellular line power bank, and a quantity of clothing valued at 230 euros, the property of Berry Ottem of Fair Hall/The Netherlands, and EC$235 in cash.

Bobb also pleaded guilty to a charge that on March 11, at Campden Park, when not at his place of abode, he had in his possession a blue Jansport backpack containing one pair of Ingco gloves, one black mask, four screwdrivers, four spanners, three wrenches, and one brown-handled knife, for use in the course of committing the offence of burglary.

Senior Magistrate Rickie Burnett adjourned the hearing of the facts and the sentencing to Tuesday, to allow the complainant to attend court.

According to the facts presented by Crown Counsel Renee Simmons and Corporal of Police David Wright, the men would climb through open windows or use implements to dislodge burglar bars and enter the homes when no one was at home.

The men were arrested after Corporal Caesar and personnel from the Rapid Response Unit met Bobb, on March 11, walking in Campden Park with a the backpack in which he had the tools.

He dropped the bag and ran when he saw the police, but the officers went to his home and encouraged his girlfriend to persuade him to come home, at which point he was arrested.

Bobb told the police: “Officer, me walk with them to the house me break but me ain’t use them because the window was open.”

During Tuesday’s sentencing hearing, Liauw-A-Joe told the court that she and her partner, Berry Ottem were on their first visit to St. Vincent and had been enjoying their stay until the crime.

They said they changed accommodation after the burglary and no longer felt safe in the country.

Meanwhile, Kirby told the court that when he came home, he met his cutlass on his couch, in addition to a clothesline that he had stored elsewhere.

The burglary victim, a preacher, asked the court to ask the defendant what his intentions were.

Bobb told the court that he had intended to take the cutlass.

Browne did not attend the hearing.

When the magistrate saw the tools that Bobb had in his backpack, he noted that two of the screwdrivers were severely bent.

He said that they were “well worked”.

Burnett observed that before the passage of the sentencing guidelines, he would have sent Bobb to prison for four years.

He, however, commented that the court of appeal seems to have a different approach to sentencing.

“And with all this in front of a court, you tell me why I shouldn’t send you to jail,” the magistrate said.

Bobb said he had made “a mistake”.

At the sentencing, Green was represented by Samantha Robertson, who noted that her client was a first-time offender who had pleaded guilty at the first opportunity.

She asked the court to grant him the one-third discount accorded to offenders who plead guilty at the first opportunity.

Meanwhile, the magistrate asked Simmons to address the court on the issue of sentencing in light of the guidelines.

The prosecutor said that the court could still sentence first-time offenders to prison if the reasoning of the court is clearly outlined. She, however, urged the court to be mindful of the totality principle.

The totality principle requires a judge who is sentencing an offender for a number of offences to ensure that the aggregation of the sentences appropriate for each offence is a just and appropriate measure of the total criminality involved.

The magistrate sentenced Green to a one-year prison term, suspended for nine months.

To Bobb, he said:

“Mr. Bobb, you are a different defendant altogether. You appear, from information, to have been the mastermind.”

Burnett further noted that Bobb had been found with certain things from which the court could draw certain inferences.

He said that because the offences were committed on different dates, he would sentence Bobb to consecutive jail terms.

The senior magistrate sentenced Bobb to one year in jail on each count of burglary, meaning that he would spend three years in prison.

The court also sentenced him to one year for being equipped to commit burglary. This sentence, however, will run concurrent to the burglary sentences, meaning that Bobb would spend no additional time in jail for that crime.

Before the sentencing, Bobb, who has other matters pending before the court, asked a police officer outside the court if all his matters would be brought up at once to reduce any jail sentence.