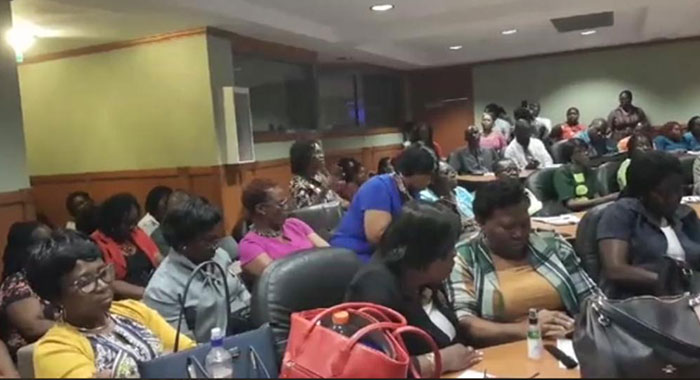 Principals at the meeting on Monday.

While health officials have advocated frequent washing of hands as a major tool in the fight against COVID-19, a principal supported keeping her school open despite its water woes.

“I am in favour of closing on Friday the 20th. Even though there is a problem at my school with water, we would be able to manage until Friday,” Jan Ollivierre-Providence, principal of the Paget Farm Government School told the government on Monday.

She was speaking at a consultation, in Kingstown, between heads of primary and secondary schools in St. Vincent and the Grenadines and the government about whether to keep schools open amidst the concern over one confirmed case of the deadly virus in the country.

The government was pushing to keep schools open until next week Friday — the scheduled end of the school term.

Many teachers wanted immediate closure, having become very anxious after a Vincentian woman, who had returned from the United Kingstown on March 7, tested positive for the deadly virus three days later.

Ollivierre-Providence told the meeting that while Prime Minister Ralph Gonsalves, who had addressed the meeting before her, had spoken about getting water, there was a problem with vandalism in the community itself.

She said the school had planned to start its exams on Wednesday but would do so on Tuesday and should “be OK by the end of the week”.

Ollivierre-Providence also spoke after Wendy Bynoe, president of the SVG Teacher Union, who had asked the prime minster about the national COVID-19 plan for the schools.

Bynoe said that her constituents were really concerned in light of the “volatile” situation, adding that occupational safety and health is a top priority.

The union leader said that while Gonsalves had cited the advice of the United States Centers for Disease Control and Prevention (CDC), which supports keeping schools open amidst the COVID-19 pandemic, SVG could not be compared to the United States, in terms of resources.

Bynoe asked what was the immediate plan for protecting the health and safety of all members of the school community nationally, including principals, teachers, students, auxiliary staff and visiting parents, what measure were in place for sanitising schools, temperature checks, and the like.

The prime minister said Bynoe’s was a very good question, adding that his government has a number of measures always for the safety and security of staff and students.

He said the question is what additionally is being done, noting that he had outlined what teachers could do if they get flu-like symptoms.

Gonsalves said that his government needed to hire more people to do cleaning, adding that the Ministry of Education and principals have to ensure there was liquid soap, other soap, and sanitizers in school.

The prime minister said that the ministry has to buy a significant amount of those items for distribution and encourage students to wash their hand.

Regarding the question of taking of temperature, the prime minister said that more than 90% of the students in the school do not have a temperature.

“So that the idea of somebody coming to take everybody temperature, I don’t know for you all, I would think that that is not a sensible use of resources.”

He said this would mean that the state would have to hire 61 nurses for the primary schools and 27 for secondary schools.

“… in some cases more than one because of the numbers you have,” Gonsalves said.

He said that among the things that teachers are taught is that the children in their care are their primary responsibility.

The prime minister said that teachers should have the skills to recognise certain things, like, for instance that a squinting child might need glasses.

The prime minister further said that most schools are located within 10 minutes of a clinic.

But at the end or his response, Bynoe told the prime minister that she did not hear what the plan was.

“What’s the national plan for schools for ensuring the health and safety of the members of the school community? That’s what I am asking,” the union leader said.

The prime minister said he was giving “elements of the plan, practically”.

Bynoe, however, said that she was interested in the plan for COVID-19.

“Well, the national influenza plan will include COVID-19, Wendy… Because the fact that — if you, in the morning you dey home and you have a flu, that you can call and get around all the regulation that taking care of you.”

Bynoe further noted that it is the dry season and constituents in the Grenadines are low on water.

“How do we propose that members of the school community wash their hands all the time?” she said.

The prime minister said that the Central Water and Sewerage Authority (CWSA) had given the assurance in respect of the water.

“And they have several proposals to make generally for the Grenadines and also for Bequia, which is the largest of the [Grenadine islands] — because they have a problem with access to the desal (desalinisation) plant down in Paget Farm and CWSA is working it out, they should have had a conversation already with [Herman] Belmar, [deputy director of Grenadines Affairs,] to find out what is the problem.”

Bynoe said she had visited school in the Grenadines during the dry season “and everybody is using one bowl of water to wash hands”.

The prime minister said that is an issue that was addressed at a stakeholders meeting.

Meanwhile, Curtis Greaves, speaking on behalf of the Principals Association, said that student attendance at the nation’s schools that morning ranged from 60 to 75%.

“That is something we have to take in consideration in closing the schools,” he said, adding that some parents had already decided to keep their children home.

“We also have to take into consideration that some of the government assisted secondary schools went to purchase supplies and couldn’t get any and some have spent over $2,000 to get supplies,” Greaves said.

“I think from an association point of view, we are comfortable with closing on Friday, the 20th…” he said, with the remainder of his comments made indiscernible by applause.