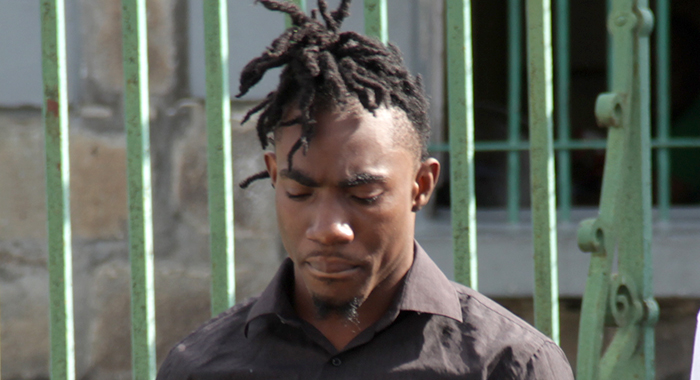 Asbert Rodney on his way to his sentencing hearing. (iWN photo)

The Edinboro man who, in 2017, struck a mentally ill villager in the head over a homosexual slur, resulting in his death, has been ordered to spend a further three years, six months and 18 days in prison.

By then, Asbert Rodney, 22, will have spent six years in jail for the death of Christopher Wilson, 52.

Justice Brian Cottle handed down the sentence at the High Court No. 1, in Kingstown, on Friday.

Rodney had initially pleaded not guilty to murder, but later asked that the indictment be put to him again.

He then pleaded guilty to manslaughter, a lesser charge, and the Crown accepted the plea.

Wilson had a history of mental illness and Rodney teased him, saying that a woman had made him mad.

Rodney, in retaliation, used a metal rod and struck Wilson in the head, causing him to lose consciousness.

In his statement to police, Rodney said that the defendant had struck him with his fist twice.

In mitigation, Rodney’s lawyer, told the court that his client had cooperated with law enforcement and had taken police back to the scene and pointed out useful distances and location.

Bruce said that while Rodney did not enter a guilty plea at the first opportunity, he did so at as soon as he had received legal advice.

The lawyer argued that his client should, therefore, be granted the full one-third discount on sentences that the court accords persons who plead guilty at the first opportunity.

Bruce told the court that the Crown and the defence had agreed that there was a level of provocation in the case.

The lawyer said that his client was “a most viable candidate for rehabilitation”.

He said Rodney had had the opportunity to go to secondary school but did not go past Form 1.

The lawyer said that his client recognised that he ought to have exercised a greater degree of restraint.

Bruce asked the court to create the perfect blend between justice and mercy.

“We are losing too many of our young men behind the prison walls,” he said.

Bruce cited the March 2019 case, in which Justice Cottle handed down a sentence of one year and six and a half months suspended for two years on Kishroy “Orchard” John, 20 of Campden Park.

John, then 17, was initially charged with murder in connection with the Sept. 28, 2016 killing of 49-year-old villager Winston Sinel “Bono” Williams.

John had struck his neighbour in the head with a stone over a response to a homosexual taunt.

In his sentencing remarks, the judge in the Rodney case, Justice Cottle, noted that the defendant left secondary school after failing three times to graduate from Form 1.

He further noted that the man had expressed remorse, saying he did not intend to kill Wilson and did not know that that would have been the results of his action.

The prison authorities described Rodney as a quiet person and members of his community spoke favourably about him, with the social inquiry report saying that he was a good candidate for rehabilitation.

Justice Cottle said the aggravating features of the crime are that a weapon was used and that it was committed in full view of the public.

He also said that Wilson might have been vulnerable because of his mental circumstances.

Mitigating, he said, was that there was an element of provocation and that the act was one of opportunity and was not planned.

He further noted that Rodney was a teenager at the time who had no previous conviction and that he cooperated with the police.

The judge had initially begun with a starting point of nine years in prison and reduced it to six years, after applying the one-third discount.

He noted that other judges had imposed similar sentences in similar circumstances.

The judge said that Rodney is not a person who is regarded as a threat to society and he hopes that he will have learnt much self-restraint and would not come back before the court for any reason.