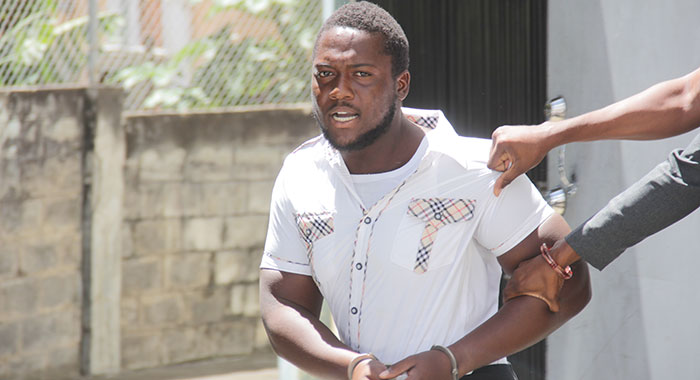 The 20-year-old Collins man charged with murdering his 94-year-old grandfather and assaulting his mother and uncle in the Marriaqua village last Sunday created a stir when he was brought to court on Wednesday.

However, his older brother, Gareth “Icon” John, told iWitness News, on Monday, that his brother had never been admitted to the psychiatric hospital, neither did he know him to have ever been treated for a mental health issue.

Police have alleged that John murdered his grandfather, Murrington Alston John, a retired contractor of the same address by beating him about his head with his hands.

He is further alleged to have assaulted his uncle, a 69-year-old retired agricultural officer by boxing him on his left eye with his hands causing actual bodily harm.

A third charge is that John assaulted his mother, Ivy John, a 62-year-old retired health officer also of Collins, by beating her about the body with his hands, causing actual bodily harm.

When the Chief Magistrate Rechanne Browne called the man’s name in court on Wednesday, he immediately answered, “Yes, please.”

A court orderly also ordered John to stand up straight.

“But your back isn’t,” the chief magistrate said.

She then read the murder charge and went on to read the charge alleging that he assaulted his uncle.

“Who?” the accused man asked?

The magistrate repeated the name Ainsley John and continued to read the assault charge.

The chief magistrate then went on to read a charge that the accused man had assaulted his mother.

However, as the chief magistrate was reading the charge, John again said that he did not kill anyone.

The chief magistrate told him that she would talk to him after.

The chief magistrate then went to on to verify with the prosecutor, Corporal Atnel Ash whether all of the matters were laid indictably.

Ash said yes about the same time that John, who addressed the chief magistrate as “Miss” — rather than “Your Honour” — during his appearance, asked where he was going to go now.

John said that he was not supposed to go to jail and asked where he was going after the court hearing.

The magistrate told him to hold on, but John held out his hand and said, “This is my hand, all them police here–”.

The lead investigator in the case, detective Sergeant 88 Bristol told John to relax.

But the accused man told the court, “She, too, could charge and say watch here.” He repeated “watch here” several times then said that the police wanted to kill him for just talking to the magistrate.

John then asked why he could “not talk to the judge” and said to the chief magistrate, “Miss, you not listening to me?”

Browne told him that she was not because he wanted to have his own way.

She said that she does things but law and order and if he couldn’t obey when she spoke she was not listening to him.

John apologised but said his hands are hurting.

The chief magistrate further told the accused that she knows he understands how things are done.

The magistrate then proceeded to ask Ash how many witnesses the prosecution was likely to call and the officer said about 22.

“For who?” John blurted out and told the court that he wanted to say what his name is, “because none of them doh wah tell yo’ my name”.

He said that his name is Jareth Davidson Jamala John, emphasising each syllable of his name.

He then went on to tell the court that he “did not kill anybody and my hand is swollen because this police throw me in jail for two weeks”.

But the magistrate, noting that the day was March 18, told John that he might have a “time issue”, because police are alleging that he committed the crimes on March 15.

She said that the “issue” that John was “manifesting” would be dealt with the police and other personnel competent to do so.

The magistrate further explained her role, noting that there were allegations and that “the onus rests on them”.

But John interrupted, asking, “Who them?”, a question he repeated several times, before asking “Why am I here? That is the question?”

The magistrate told him that she had read to him the charges for which he had been brought to court.

But John turned to a police officer and asked the officer why he was in court, saying that the officer could not answer the questions.

John continued to repeat the question, and the magistrate reprimanded him, saying that she understood, but John said no.

He continued to repeat the question as he was ordered to stand down, and the magistrate told the police to remove him from the courtroom straightaway.

John continued to misbehave in the corridor of the court, saying that police wanted to kill him.

He said that one of the officers had a gun in his pocket.

However, officers, especially those in plain clothes, who are carrying pistols, generally carry their weapons concealed, but not in their pockets.

John continued with his inappropriate behaviour outside the court, as captured in the video accompanying this post.

Meanwhile, last October, Keron Samuel, 19, of Evesham, who is said to be mentally ill, was charge with his father’s murder.

He was charged that between Sept. 29 and Oct. 1, 2019, at Evesham, with malice aforethought, he caused the death of George Benjamin Samuel by an unlawful act.

The body of the 56-year-old man, who went by the alias Coban, was found in a shallow grave on Oct. 1 about 100 yards from the house where he lived with Keron and his other son.

In July 2019, Clinton Cambridge, 22, of Sion Hill was charged with murder in connection with the stabbing death of his father.

Clint Miller-Boucher, 55, also of Sion Hill, is alleged to have been stabbed multiple times in his home village resulting in his death.

Both matters are before the court.