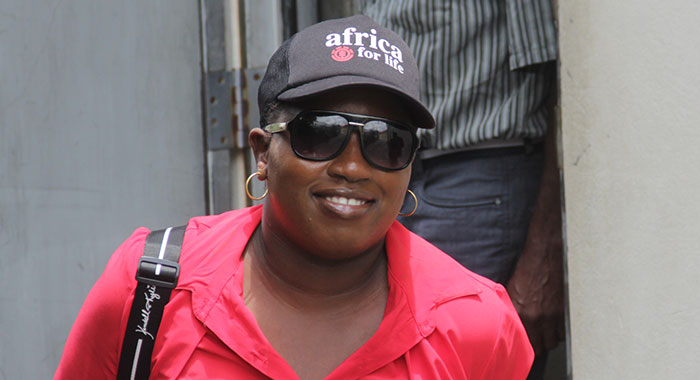 An employee of Star Garage says the former worker accused of stealing over EC$100,000 from the company through unauthorised credit card use was never rebuked by the managing director when she would behave improperly at work.

Angella Bristol, the company’s account clerk, told the trial at the Serious Offences Court, on Thursday, that Bertille “Silky” Da Silva never corrected the accused woman, Eunice Dowers, much to the chagrin of his nephew, Joshua Da Silva, the company’s general manager.

Dowers, 26, who was born in Nigeria and is Vincentian by marriage, is being tried for fraud, theft, and unlawful use of the credit card assigned to Bertille “Silky” Da Silva, 89, chief executive of Star Garage.

The Crown is alleging that Dowers unlawfully used the money when she worked at Star Garage from April 2018 to February 2019, first as Silky’s secretary and then as the company’s Customs broker.

Bristol told the court that she saw Dowers and Silky together in his office using Dowers’ laptop to order items online.

“Whenever something happened at work, Mr. [Bertille] Da Silva didn’t correct her. Joshua used to complain to me,” Bristol said.

Bristol said that while Joshua was concerned about the interaction between Dowers and Silky, she (Bristol) did not complain when Dowers spent long periods in Silky’s office.

“How could I complain when the two of them were in the office ordering? Joshua used to complain to me because he can’t speak to her,” Bristol said.

Bristol was one of five witnesses, including a Customs official, the manager of a courier company, a police IT specialist, and the secretary at Star Garage to testify after the trial resumed after an extended break.

Defence counsel Grant Connell is arguing that Silky gave Dowers permission to use the credit card because they were in a relationship, allegations that the businessman has denied, saying, when he testified as the first witness in the case, that Dowers is not his type as ‘she eat like a cattle’, consuming four pounds of beef in one sitting.

In her evidence in chief on Thursday, Bristol, who has worked at Star Garage for 20 years, said that most of the staff did not like Dowers when she took up her post as Silky’s secretary.

Bristol said that she first met Dowers on the job and they became friends, although there was no link between their jobs.

She said that her desk is located right outside Silky’s office and, therefore, she can see who goes in and out.

On one occasion, Bristol told the court, Dowers went into Silky office and stayed a long time.

“When she came out, I asked her what they were doing, because she stayed a long time,” said Bristol, who further said that she had gone into the office and saw Dowers and Silky ordering stuff on the online shopping website, Amazon.

She said that Dowers left Star Garage after an altercation with then-co-worker Marlon Stephenson, which left her with a swollen face.

“So I used to call her and used to ask if she was taking medication. I used to check up on her,” Bristol told the court.

She said she never asked Dowers to order anything for her and proceeded to ask the court if she could explain.

However the chief magistrate told the witness that if the prosecutor wanted her to explain, she would so request.

As the same time, Connell was egging on the witness, saying — in the playful-sounding tone he often speaks in court — “Let her explain.”

Bristol told the court that she saw Dowers after she left Star Garage and the accused told her that she was leaving St. Vincent to take up a job in healthcare in England that her brother had secured for her.

Dowers had told her that she was leaving on a Monday and met with Bristol the Saturday before to leave some items at a house in Peruvian Vale that Bristol was overseeing.

Bristol said Dowers had told her that she was going away for six months and Dowers and her husband were at the house.

Police removed the items from the house after arresting Dowers at the airport the day before she said she was scheduled to travel, Bristol told the court.

Bristol said she had told Joshua about the items that Dowers had left at the house.

“Whenever something happened at work, Silky didn’t correct her. Joshua used to complain to me. So I wanted to ask Joshua if any of the things were what he was querying,” Bristol explained.

She said that Dowers used to sells bras, creams, soaps at Star Garage, telling the staff that she had gotten them from her husband’s sister.

During her cross examination, Bristol told the court that, on different occasions, Dowers showed her money, which she was saying that Silky had given to her.

Dowers was paid EC$700 monthly, adding, “apparently it was too low when she was in need–”

Bristol said that she knew that Silky was giving Dowers the company’s credit card to order items online.

She, however, said that Joshua, rather than Dowers, is supposed to be doing that ordering.

“Who is the boss?” Connell asked

She said it was not that she had a problem with Silky and Dowers ordering things online, but that Joshua used to complain to her “and I didn’t believe until I saw it for myself.

Bristol said that Dowers had her laptop on Silky’s desk with an “egglet” on the screen.

The accounts clerk said that Star Garage does not sell egglets and Dowers said she was ordering it for Silky’s house.

She said that, at Star Garage, Dowers was not well liked and she (Bristol) was one of two staffers who looked out for her.

The staff members, however, weren’t jealous of Dowers “at all,” Bristol said.

Bristol admitted that in her statement to police she had said that Dowers had too much exposure to the company as it relates to cheques.

She, however, said that she did not want to get Silky to stop Dowers from using the company’s credit card.

Bristol said that she saw Dowers with expensive items that Joshua has pointed out to her (Bristol).

Dowers and Joshua were not in a relationship, Bristol said, but told the court she did not know if that was the case with Silky and Dowers.

Bristol said that Joshua had been investigating Dowers “all along”.

“He used to complain to me and I was getting fed up and used to tell him tell Silky himself,” Bristol said of the company’s general manager.

“Joshua couldn’t speak to her because, in local terms, she was Silky’s smallie,” the lawyer told Bristol.

“I don’t know,” the witness responded.

She, however, said that Dowers used to tell Joshua in front of the staff that if he had a problem with her, he should take with up with Silky.

Bristol said she did not know if Silky and Dowers had a relationship that allowed her to do whatever she wanted at Star Garage.

After Dowers left the company following the altercation with her co-worker, she returned on two occasions and went into Silky’s office.

The first time, Dowers spent “more than an hour” inside Silky’s office and when she came out, she said Silky had given her money, Bristol said.

On the second occasion, Bristol said, she could not say how long Dowers had stayed, adding that it was more than an hour.

She said that lunchtime came while Dowers was still in the office and the company closes for lunch.

When Bristol got back, Dowers was gone.

Bristol told the court that Dowers was never fired from Star Garage.

The accused, told her that she felt embarrassed to return to work after the altercation, she said.

Joshua, however, Bristol said, had told her to tell Dowers not to return to work.

Bristol said that after arresting Dowers, the police removed from the house in Peruvian Vale the items that Dowers had left there.

Bristol said that she had searched the items in Dowers’ absence and they were household items, but there was no egglet there.