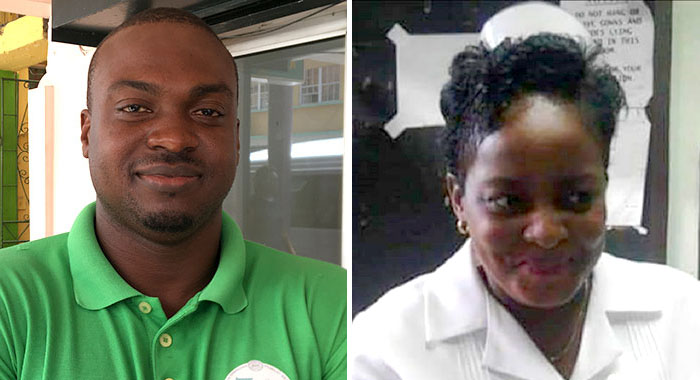 Kenson King, left, reminded persons of police inaction ahead of the January 2020 killing of nurse Arianna Taylor-Israel, allegedly by her husband with his licensed firearm.

In January, St. Vincent and the Grenadines was shocked when it learned that a man who had allegedly gunned down his wife at their son’s school still had his licensed firearm after she had repeatedly told police that he had threatened to kill her with it.

However, last week, when a prison officer, citing that incident, said on Facebook that a politician had allegedly ordered the return of licenced firearms to a man who had threatened to kill his relatives, the prison officer was arrested and kept in custody for more than 30 hours.

The prison officer, Kenson King, 33, of Park Hill, was kept in custody while police told him they were conducting an investigation that he had incited public fear and alarm.

The man who King claimed had made the threats, however, was not arrested and retained his firearms, after a politician reportedly ordered that they be returned to him.

King, who has been a prison officer for 15 years, told iWitness News on Monday, that he was going to take the advice of his lawyer, Jomo Thomas, and bring a false imprisonment suit against the government.

King said he was arrested at his workplace at Her Majesty’s Prisons in Kingstown sometime between 11:30 and11:45 a.m. on Friday.

He said that his chief had summoned him to his office and when he got there, he met three men, who identified themselves as police officers.

He said that Sergeant Biorn Duncan — a detective assigned to the Major Crimes Unit — introduced himself by use of his police ID card and, in turn, introduced his colleagues, one Sergeant James and a corporal.

King said that Duncan had a paper and said it was a copy of a Facebook post that they were investigating because it was liable to cause public fear and alarm.

“He showed it to me and I read it and I asked the question where in the post was anything liable to cause public fear or alarm.”

King said that Duncan said that the part that jumped out at him (Duncan) was where the post said that something like what happened with Nurse Taylor would not happen again.

Nurse Arianna Taylor-Israel died on Jan. 30 after she was allegedly shot by her husband, Mitch Israel, at St. Martins Secondary School, where one of their two sons is a student.

After her death, it emerged that Taylor-Israel had gone to the Questelles Police Station at least three times in the five days before she was killed, alleging that her husband had threatened to kill her.

Israel is alleged to have shot and killed his wife using his licensed firearm, even as a warrant had been issued for his arrest.

The warrant was never executed and a source told iWitness News that police might have chosen not to act as they were convinced that even if they had confiscated his weapon, they would have received call within minutes ordering that it be returned.

King said that after his arrest, he was taken to the MCU office then to the Criminal Investigation Department (CID), both located at the police headquarters in Kingstown.

He said he remained in custody until about 8:30 p.m. Saturday when police told him he was free to go — without any charge being brought against him.

King said that the incident that the Facebook post addressed was part of a “longstanding, long-running something that has been going on”.

He said that he had a relative who has two licenced firearms – a shotgun and a pistol – and who had repeatedly threatened to use the weapon to kill his (King’s) father and other relatives.

“The police have cautioned him before pertaining to discharging the firearm over my father,” King said.

“There have been numerous times that my father had gone to the Colonarie police and made reports pertaining to his brother threatening to shoot him and all of them.”

He said that a report was made to the police in Colonarie last Wednesday regarding the firearm holder and the police responded by taking the man and his guns into custody.

The man was released but police kept the firearms.

King, however, said that on Friday, the man came to the road with the guns and was bragging that he went to a politician who called the Colonarie Police Station “and asked them if Colonarie gave [the man] gun licence so [if they had not] they must ‘give him back he gun’.

“So he got back the guns. Those are his words,” King told iWitness News.

“This is what the post was saying,” he added.

Asked if he had made the post, King said:

“Out of frustration and of nothing being done by the powers that be, meaning the police, I think it was necessary that the public knew what was going on.

“And in my estimation, if there is any fear and alarm, there must be fear and alarm that someone is allowed to keep on threatening people with licensed firearms even after being reported to the police so many times and nothing is being done.

Regarding the Nurse Taylor case, King said that based on what has been reported by the media, she had made many reports to the police regarding alleged threats her husband had make to use his licenced firearm to kill her.

“… and then allegedly being shot by her husband with the same licenced firearm,” King said.

King told iWitness News that he is very vocal on social media, “politically, socially” and that his detention was quite possibly linked to that.

He said he was “deterred in no way” by his arrest.

“You just made me stronger, man. I am not going to stop commenting. I have a constitutional right, just like everybody else, to speak,” he said, adding that he has left it up to his lawyer to deal with the legal aspect of his detention.

“But it is sad, at the end of the day, things can be done in the way it is done, all willy-nilly sometimes, simply because, sometimes there are those who believe that there are people who do not know what their rights are,” King told iWitness News.