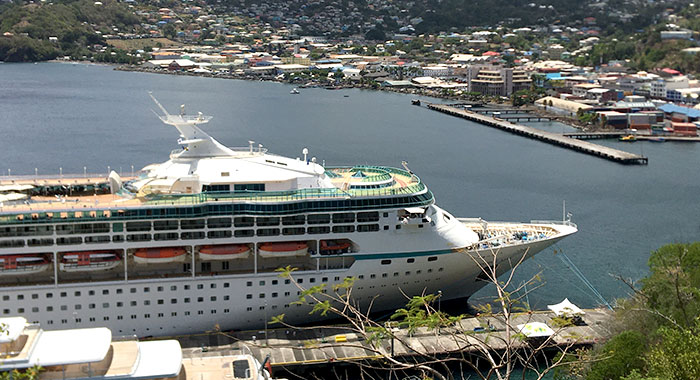 The COVID-29 positive results are from sailors repatriated on Royal Caribbean’s ship Vision of the Seas, which has been docked in Kingstown since Tuesday. (iWN photo)

Prime Minister Ralph Gonsalves has confirmed that 29 Vincentians on Vision of the Seas cruise ship have tested positive for COVID-19.

Gonsalves gave the confirmation on NBC Radio on Wednesday, more than 10 hours after doing to so to a media outlet in Trinidad.

Guardian Media reported around 11 p.m. Tuesday that the 29 Vincentians, who are among 356 being repatriated, have tested positive for COVID-19 after being administered rapid tests.

The Trinidad media outlet, however, noted that the Vincentians were tested for antibodies and the World Health Organisation or the Ministry of Health has not approved this as a realiable test for COVID-19.

The government had indicated that any person who tests positive on rapid testing will be administered the more accurate PCR test before being confirmed as COVID-19 positive.

Vision of the Seas has been docked in Kingstown since Tuesday morning and could remain there until Thursday, as the government administers COVID-19 tests on the 356 Vincentians.

“A certain number were tested negative on the rapid test and those disembarked. I was advised by the Health Services Committee that they were put into quarantine. But everybody has been tested by PCR and those tests would have gone yesterday (Tuesday) afternoon sometime before 4 o’clock to Trinidad.”

He said that his government is expecting the results of those tests by Thursday morning.

“They may even come back today, this evening, so you are not going to have any disembarking until probably tomorrow (Thursday) of the general body because that PCR test is the gold standard. They will tell us if anybody has to go into government appointed quarantine or into isolation or to go home to be quarantined for the 14 days,” Gonsalves said.

He said that when the Trinidad journalist contacted him Tuesday, he asked that she not demonise the cruise line because of “what positive tests there are” as the ship is also expected to repatriate Trinidadians.

Gonsalves noted that the rapid tests looks for the antibodies, which show that someone was at some point exposed to COVID-19 but is not, at the time of the test, able to transmit the viral illness.

When the lead paragraphs of the article were read to him, the prime minister said:

“Well, that’s fair. The headline might frighten people but the body of that story is correct…

“…the journalist, from those lines, has clearly kept the story in rational scientific bounds, nuh.”

“The repatriation of T&T nationals aboard Royal Caribbean International’s (RCI) Vision of the Seas hit a possible snag yesterday after 29 St Vincent and the Grenadines crew members tested positive for COVID-19 on arrival to their home country.

“However, the tests administered to the Vincentians were antibody testing not approved by the World Health Organisation or the Ministry of Health as a proven test for COVID-19. As such, the Vincentian government will now administer the more reliable Polymerase Chain Reactor (PCR) tests to determine the validity of the first tests.”