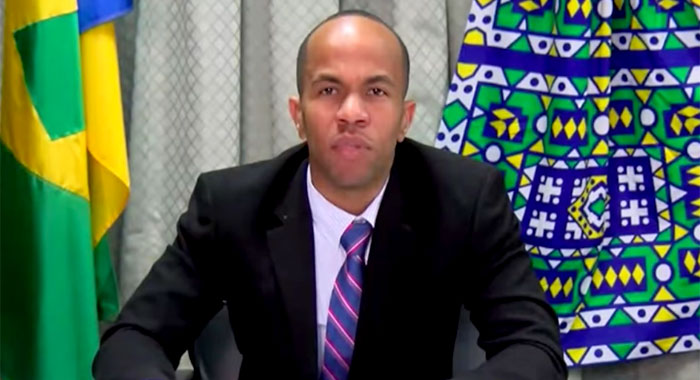 St. Vincent and the Grenadines Health Minister Senator Luke Browne was among delegates whose statements at the virtual 73rd World Health Assembly (WHA) were ended abruptly for exceeding their allotted two minutes.

Browne had spoken for 2 minutes and 21 seconds beyond his allotted time and had spoken through three requests to conclude his statement when the moderator ended his presentation last week.

The development comes one year after Browne emerged as a “rock star” in Taiwan, after pleading the case for that country’s inclusion in the WHA.

A video post on the Unity Labour Party’s Facebook page since last week’s virtual WHA, the audio of which did not include the interventions of the moderator, suggests that Browne spoke for some 4 minutes and 25 seconds.

“It is affecting lives and livelihoods,” Browne said, adding, “I never thought I would see pictures of an empty JFK airport, the UK in lockdown, and health system the world over under siege.”

Browne said that COVID-19 made this a reality in the 21st Century and that persons are basically marooned in their own countries.

He gave SVG’s COVID-19 statistics and noted that no health worker had been infected.

Browne further said that in response to COVID-19, his country had implemented a raft of social and public health measures to minimise the spread of the disease.

It was impossible, Browne said, to recite all of these measures in a two-minute video.

He, however, said that the nation’s strategy can be summed up in a few short lines, including finding new cases and isolating them, taking special precautions with high-risk groups such as travellers and exposed persons, providing appropriate clinical care, apply general and specific infection control and prevention measure as guided by the science.

“Fighting COVID-19 is like fighting a fire, we must go after it aggressively and snuff it out.”

Browne said that SVG never had to resort to full-scale lockdown or impose a curfew or close borders or airports.

As the two-minutes expired, Browne was saying, that, naturally, travel activities were curtailed by the suspension of commercial flights.

SVG built its response on the foundation of public trust through advisories and appropriate actions, Browne was saying as he exceeded his 2 minutes.

The health minister said that his government has been managing the risk with the aims of maximising the health, freedom, rights — economic, social — and other benefits to the population.

He said his government’s response was affected by the disruption of supply chains and trade restrictions.

It took SVG two and a half months to get a PCR machine “and even the International Atomic Energy Agency for all of its good intentions and explosive might seemed powerless to help us on this matter. This raises many searching questions,” Browne said.

At 50 seconds beyond his time, Browne was saying that his government had to deal with complex matter such as the repatriation of Vincentian cruise ship employees who were abroad.

At this time the moderator interrupted, telling Browne, “Honourable Minister, we would kindly ask you to conclude.”

However, Browne pushed on, thanking God for everyone who came to the assistance of SVG.

He said the Caribbean Development Bank, the International Monetary Fund, the World Bank and the United Arab Emirates, stood by SVG.

Cuba sent doctors and nurses for SVG’s isolation centre, and Venezuela provided supplies and rapid test kits even though it is still subjected to sanctions and “political adventurism at the time of COVID-19.

By this time, Browne was already 1 minute and 32 second beyond the allotted time.

He said that Taiwan has emerged as a shining example in terms of response to COVID-19 and has provided assistance to many countries including SVG, but is still locked out of the WHA.

“This matter must be addressed and resolved in a satisfactory manner,” Browne was saying as the moderator again asked him to conclude his statement, 1 minute and 43 seconds beyond his allotted 2 minutes.

“Taiwan can help,” Browne, continued, however,

He was saying that the Director General of the World Health Organisation is fond of saying that the antidote to COVID-19 is national unity global solidarity and human spirit, Browne said, having now been speaking for twice his allotted time.

“We are in tempestuous scenes but we could summon to our assistance the following refrain from a popular song of faith in our country: ‘With Christ in our vessel, we can smile at the storm.’

“We would beat the corona virus pandemic together.  We are looking forward to the development of a vac –” Browne said when his feed was cut and the moderator thanked his for his statement and invited the next speaker to make their statement.