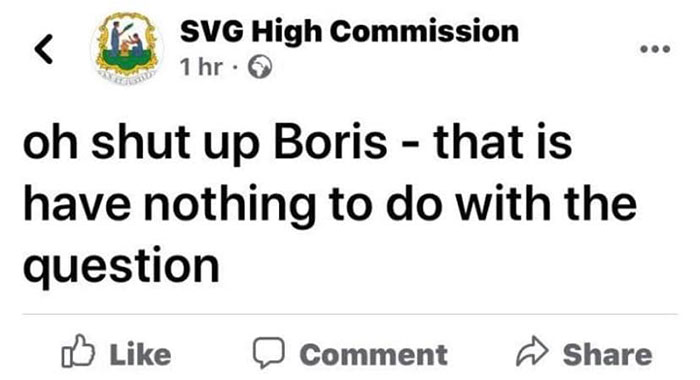 A screen capture of the post suggest that it displayed for at least an hour before being removed.

Just over five years after an embarrassing hacking of its government website, St. Vincent and the Grenadines, on Wednesday, said hacking again resulted in a post on the Facebook page of its High Commission in London, telling U.K. Prime Minister, Boris Johnson to “shut up” earlier that day.

“oh shut up Boris – that is have nothing to do with the question” read the post, on Wednesday, which was subsequently deleted.

The Ministry of Foreign Affairs in Kingstown, said that the Facebook page “was hacked, resulting in an unauthorised post with apparent reference” to Johnson.

“As of Wednesday, a thorough investigation has been launched by officials at the High Commission of Saint Vincent and the Grenadines in London, in an effort to identify the source of the hack and to mitigate any future attempts to thwart the relationship between both countries,” the statement further continued.

“The Government of Saint Vincent and the Grenadines reaffirms its high regard for the British Government in keeping with the Vienna Convention on Diplomatic Relations and extends its best wishes to Prime Minister Johnson and the British People.”

It is the second time in about five years that Kingstown is claiming hacking in embarrassing developments on its Internet platforms.

On May 3, 2015, the landing page of the www.gov.vc website was hacked and replaced by pro-Islamic State messages. The hack was purportedly carried out by an individual or entity using the name “Moroccan Wolf”, who the Moroccan government has said is known to them, Minister of Technology Camillo Gonsalves said after the development.

Speaking to the media towards the end of that month, Gonsalves said that the visit of of Prime Minister Ralph Gonsalves to Morocco in March 2015 may have triggered interest in SVG that resulted in the hacking of the government website.

The hacking also occurred at a time when the website was vulnerable, the Ministry of Technology having relaxed some security protocols to allow several programmers to work on a new web portal that was expected to be launched on May 4, the technology minister had said.