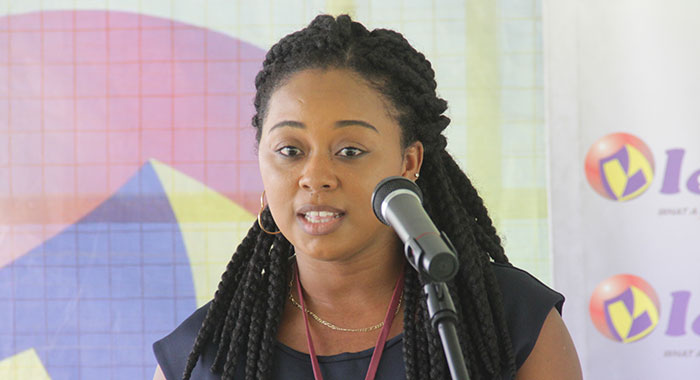 A daughter’s dream about a Lotto draw has made her father an instant millionaire and has put her own dream of becoming a medical doctor one step closer.

On Tuesday, in Kingstown, when Joseph Ballantyne, 59, of Sion Hill, Sandy Bay, was presented with his Lotto prize of EC$1,685,000 — the largest ever in St. Vincent and the Grenadines (SVG) — his daughter, Jolene Baptiste, 28 told the media of the dream in which she got the winning numbers.

Baptiste said that her paternal grandmother died two years ago. The deceased woman visited Baptiste in her sleep on May 23.

“So I was having a conversation with her in my dream about moving back home and stuff like that,” said Baptiste, a call agent at Clear Harbour, a call centre, who rents and apartment in elsewhere

“And then she told me she was going to sleep so I told her I would come in after,” Baptiste said, further recounting the dream.

As the dream continued, Baptiste said, she went to watch TV.

Baptiste said that she keyed the numbers in her phone in the same order in which they were called in her dream and then dialled the number so that it could save to her call logs.

Baptiste said that she and her son went to Sandy Bay to visit the Saturday morning and she told her father about the dream.

“So he was like, ‘Gi’ me dem. Ah wa’ar some money,” Baptiste recalled.

Baptiste, who is a registered nursing assistant, said she gave her father the numbers and he sent to buy the ticket on the Saturday for the draw the following Tuesday, May 26, but the numbers from her dreams were not the ones selected in that draw.

“And Friday night [May 29], when I was home, I was watching it live on Facebook so when I saw the numbers, I was like, ‘Those are my numbers that I gave daddy to play. So I checked back in my call log to see if it’s the same, exact numbers. When I checked, those were the numbers.

“So right there and then, I was excited. I started to cry — called home,” Baptiste said.

Baptiste said that her mother, Norene Baptiste, answered and she asked her if her father had bought Lotto tickets that day.

Baptiste’s mother told her that she did not know and would ask her father.

“I said, ‘Daddy, please tell me that you bought those numbers that I gave you to play.’

He say he not sure he going to check for the ticket and he go call back.

“I said, ‘Daddy, somebody in Sandy Bay win and it has to be you. Please tell me you buy them. He said he going call back. Like five minutes after, he called back and was like give him the numbers. So when I called them out for him, he started to cry. He said, ‘Yes. Those are the numbers.’ So right then and there I was so excited. I was so happy for him.”

But shortly after the draw, various rumours began circulating that the ticket had been bought by a 17-year-old who had signed it after the winning numbers were called.

The National Lotteries Authority says that persons under the age of 18 cannot claim a Lotto prize and that the company is not obliged to honour defaced tickets.

Regarding the rumour that an underage child had bought the ticket, Baptiste said that she thinks that on the night of the draw, someone made a post on Facebook saying that a young lady had won.

“And then it happen so the young lady friend responded and say it was a prank, she did not win so everybody saying is an underage girl and all them stuff like that.”

The ticket was actually purchased by Ballantyne’s grandson, Tyrese Baptiste, 17.

“I hearing all kind of rumours saying a 16-year-old boy buy it and sign he name. My nephew he’s 17, he went to buy the ticket for my dad, so that is how the rumour started.”

She said she “did not feel any way” when she was hearing the rumours.

“I was just ignoring them because I could have made post on Facebook but I did not. So I just ignored it.”

Baptiste said her nephew did not sign the ticket, as had been rumoured.

Baptiste was especially pleased that her father had won the prize.

“… he has been working hard, sending us school. He has four kids; he had to maintain the household, which is two houses in the yard. So he has to maintain everybody within the household, send us to school, pay for exams, everything, and it was just strain on him. He was struggling, sometimes he couldn’t even make ends meet and if he has his last and we want it, he would give it to us, numerous times.

“I am renting and if I call my dad and I tell him, ‘Daddy, can you help me with some money this month?’ he might have a bill to pay but he would give me that money for me.”

And while it was she that dreamt of the winning numbers, Baptiste said that she will make no demands of her father about the money.

“I am happy for him. So, I don’t want half of it. People are saying ‘the daughter say she wants half’. That is not true. Whatever he gives to me, I would be satisfied,” she said reiterating that her father really deserves the jackpot, adding that while she was growing up, her family was “not that fortunate”.

However, she has always wanted to go to medical school.

“Hopefully he helps me with that,” Baptiste said of her father.

Ballantyne waited a week before visiting the Lotto headquarters in Kingstown to redeem his prize.

Baptiste said she was confident that her dad would not have lost the ticket.

Asked where her father kept the ticket, Baptiste laughed and said:

“I don’t know. It was [at] home. Our home is very secure, so nobody would have actually gotten to it.

“Because nobody didn’t really know [that he had won the jackpot]. It was like rumours. Some neighbours of ours, they had it as rumours spreading it because we didn’t really tell anybody. It’s just the family, but it started to get out so people started to assume it was him so we leave them to assume.  Well, it’s actually him so we just leave it like that.

Ballantyne told the media on Tuesday that his oldest daughter, who is 35, has stage 1 breast cancer and he would use some of the funds for her medical treatment. His other children are 32 and 21 years old.