Woman accused of stealing $40,000 from her grandma 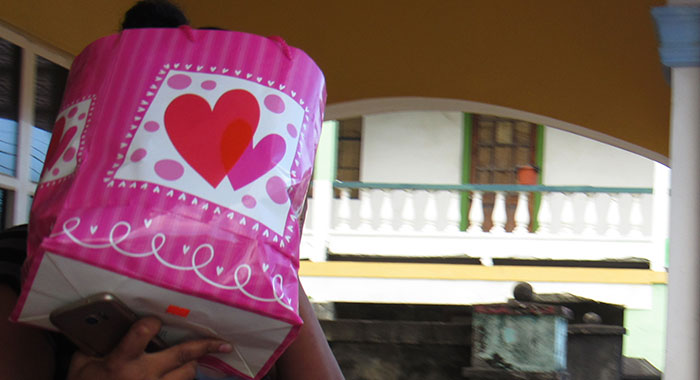 The accused, Nadia Lawrence uses a bag to hide her face as she leaves the Georgetown Magistrate’s Court on Monday. (iWN photo)

A 38-year-old Colonarie woman was, on Monday, granted bail, but failed to secure a surety by the end of the court hearing. She was charged with 57 counts of theft from her grandmother, amounting to EC$40,513.45 in cash.

She is further alleged to have withdrawn the monies from the bank account of her grandmother, Nola Lawrence, 78, of Colonarie, without her permission.

Lawrence appeared before Magistrate Bertie Pompey at the Georgetown Magistrate’s Court where she pleaded not guilty to each of the charges.

As the magistrate read the charges, he commented on the manner in which Lawrence was entering her pleas.

“You fed up? I reading the longest and I not fed up. All you have to do is just answer ‘guilty’ or ‘not guilty’,” Pompey commented.

The prosecutor Sergeant of Police Renrick Cato did not object to bail, which the magistrate set at EC$45,000 with one surety.

Pompey granted the prosecution’s application that Lawrence report to the Colonarie police station every Thursday between 6 a.m. and 6 p.m.

The court further ordered Lawrence to surrender her travel documents and that stop notices be placed at ports of entry and exit.

She must obtain the permission of the court to travel outside of the country.

The matter was adjourned to June 17 and has been transferred to the Kingstown Magistrate Court, as Lawrence is alleged to have committed the offences in that magisterial district.