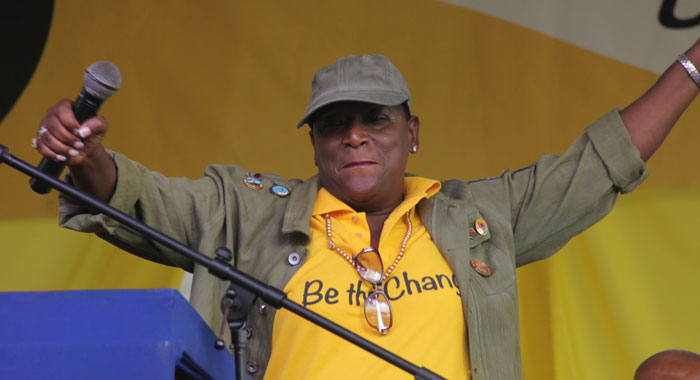 An opposition candidate in the next general elections has echoed the Bible prophet, Jeremiah, saying that her New Democratic Party has plans to prosper the people of St. Vincent and the Grenadines.

“Jeremiah 29:11 says, ‘For I know the plans I have for you, declares the Lord.  Plans to prosper you. Plans to give you hope and a future. That is the NDP word for you,” Senator Kay Bacchus-Baptiste told a virtual meeting broadcast on social media and radio Tuesday night.

“That is the NDP word for you, the people of St. Vincent and the Grenadines, in the voice of the prophet Jeremiah: plans to prosper you, plans to give you hope,” the first-time candidate told the meeting focused on voters in West St. George, which she is hoping to wrest from the ruling Unity Labour Party.

The ULP has been representing West St. George since 1998, when it also captured the majority vote nationally.

Bacchus-Baptiste said that during her canvassing, she engages constituents, especially the youth.

“Some of them say they feel a sense of despair, a sense of hopelessness, that nobody cares,” Bacchus-Baptiste said.

“One young person from Bom Bom said to me, ‘They believe that you don’t have value and integrity.’ They must believe that when they think they could only wine and dine and dance them around election time to get a vote, when they could take people’s money and buy galvanize and lumber and give them away, but we have values too; what we want is more jobs.”

“He said, ‘When I listened to you, I understand that you feel our need, you feel. It is sincere.’ And I tapped him and I said, ‘Yes, my boy. That is absolutely true.”

Bacchus-Baptiste said she is in politics because she cares.

“I believe in one family under God; not a divided family, red here and yellow there. I believe that we should be all our brothers’ keepers. I don’t like the divisiveness of this administration.

“You know, I said they have a campaign of three D’s: division, diversion, and divisiveness. They have nothing to offer you, my people. How can you explain a government that has been in power for 20 years cannot run on their track record? They have to come and bribe you with money and your own galvanize and lumber and cement.”

Bacchus-Baptiste said another youth told her that he does not understand “how he fits into this St. Vincent, [it is] as if there is no future for young people, as if only one family matters and so he lives his life daily, day by day just existing.

She said a resident of Dorsetshire Hill, when asked what he wanted to see for his community said he wants to see a change in government.

“I say yes, ‘But what do you want to see as the change in government?’ … He said, ‘Ah say change the government.’ So I said, ‘Why?’ He said, ‘I used to support them. But today, I have never had it so hard.’ And he said, ‘What is more, they don’t even care. They don’t even come and look for me anymore. Only the last time I saw them was last election.’

“Another one said to me, ‘You could tell when election coming. Same Dorsetshire Hill, he say, because every election time you see they come and they start to work on the Dorsetshire Hill ball ground. And then after that, nothing happens. My people, your eyes are being opened,” Bacchus-Baptiste said.

She said that when she went through Queen’s Drive on Monday, she met a ULP supporter who said half of his house was damaged by Hurricane Tomas, in 2010.

“And to this date, in spite of all the talk of Lives To Live and giving away lumber and all of that, he cannot get his house fixed,” Bacchus-Baptiste said.

“Tomas was what, 10 years ago? So when they come and tell you that they bring in these cement galvanise to help people, it is just to help themselves. That is all they are interested in, my dear people. Don’t be fooled. It is to keep one family there. One family matters. I say no. We, in the NDP, say no. All families matter! All families matter! We say ‘One love. One Vincy. One nation’, and we mean it,” Bacchus-Baptiste said.