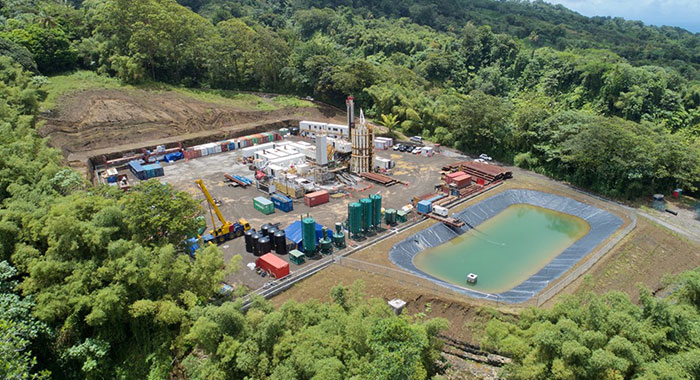 The St. Vincent Geothermal Project site during the drilling period.

Prime Minister Ralph Gonsalves has said that while a suitable temperature has been found in the three wells his government has dug on the eastern slopes of La Soufriere volcano as part of the geothermal project, the desired level of permeability is absent.

He said that the government is considering whether it makes sense to continue with the project.

However, Cummings, who is member of parliament for West Kingstown, speaking Tuesday on New Times, his New Democratic Party’s radio programme, said this could have been avoided had the government listened to the warning of the opposition.

Cummings said that studies done under the NDP administration before 2001, when the ULP came to office, suggested that the western slopes of the volcano were more suitable for geothermal exploration.

He said that invariably, heat would be found in any hole dug two miles into the earth’s surface.

However, if a mechanism cannot be found to bring that heat to the surface “discovering heat is no discovery at all,” said Cummings, a water engineer.

He said that when digging for geothermal energy, one is digging miles into very tough rock, which is a very costly operation of about US$4 million per hole.

Added to this is the cost of mobilisation and cost of special equipment.

“This government chose to go into the exploration of geothermal [energy], building a geothermal plant in a rather unusual method,” he said, adding that the government did not dig an exploratory well.

Cummings said this would have allowed for testing for the type of soil and the heat at various depths.

“And it is based on these exploratory wells a decision would be taken whether to dig wells for exploiting the energy.

“But we chose not to dig any exploratory well. But we were so gung-ho, we were so pompous, we were so sure of this game changer that we went ahead and dug three holes at very expensive cost.”

He said that even after the first hole was dug and, as expected, they found heat, there was big celebration about finding heat.

“As if anybody had to tell you that when you dig two miles into the earth, you find heat. What it didn’t tell us is that having found the heat, when they poured water into the well, you find that the water is not going anywhere because there is porosity, there is not permeability, there is opportunity for the water to go through the rock.”

He said that from the first well, it was realised that the level of permeability was absent but the government went ahead and dug a second well and a third, with the same result.

“And they kept telling us about things they can do, like magicians. They want to create permeability two miles into the ground in bedrock that is not fissured…” Cummings.

He said that the heat that the government found is absolutely useless for the generation of geothermal energy because there is no opportunity to extract it.

“And all along, they have been trying to tell us that it is coming and it is almost there and there and they have given us no clue, not a single clue have they given us that there is any possibility that this thing would fail.

Cummings said that the presence of the hot springs in North Leeward suggests that directly below that area, there are cracks in the rock which allow for heat to escape to the surface and heat the water in the streams.

He said that this is why the first study suggested that the project be built on the leeward side of the country.

“And I ask you again, to ask this government why is it that North Windward and not North Leeward was chosen as the site for geothermal exploration. They lifted our hope and they have dropped us like hot potatoes.”

He said that in order to extract the heat, there must be a source of water that can be pumped into the well, which will become superheated and emit the energy.

In the North Leeward area, there is a stream with a ready supply of water, while in the North Windward, the government had to build a dam.

He said the government must say what is the true cost expended to date and why the government never told the country the project had a 50-50 chance of success.

“Why did they sing this song about game changer so loudly? Why did they gallivant so much, when, after the first well, as expected, they found heat? They gave the impression, hallelujah, we’ve reached the Promised Land as if everybody doesn’t know that at that depth, over two miles into the ground, you must find heat.

“No understanding had been given that finding heat is just the first of many components. Being able to extract the heat is the most critical element and that was non-existent from the very beginning, though that had to be pushed under the rug.”

The opposition lawmaker said that SVG is “the laughing stock of the world in so many ways.

“This geothermal project is another humongous disgrace. It is characteristic of a lack of taking the people on board, of being open and fair; it is characteristic of playing politics with a huge investment, gambling with the people’s minds and their resources and not taking into account the established procedures, taking the people on board and informing upfront of the risk involved, while at the same time pointing out the good potential,” Cummings said.

He said that the geothermal energy wells have been dug and the drilling equipment repatriated.

“…  anybody with any common-sense in this field knows that that is a dead enterprise,” he said, adding that the government had not come to the public to explain what has happened with the project.

“You don’t hear a word from them. They have kept quiet. Ask yourself why. Why have they kept quiet? Why did they take us for such a wutliss ride? Where do we go as a people with another elephant?

“Investment without planning, investment for whatever political objective, investment without bringing the people on-board honestly at the beginning, in the middle and now at the end without coming to us and tell us what have been the pitfalls, what are the errors, why we find ourselves in this unenviable position, having the touted this game changer then having to tell the people that the game changer has changed for the worst,” Cummings said.

3 replies on “SVG taken for ‘wutliss ride’ with geothermal project”