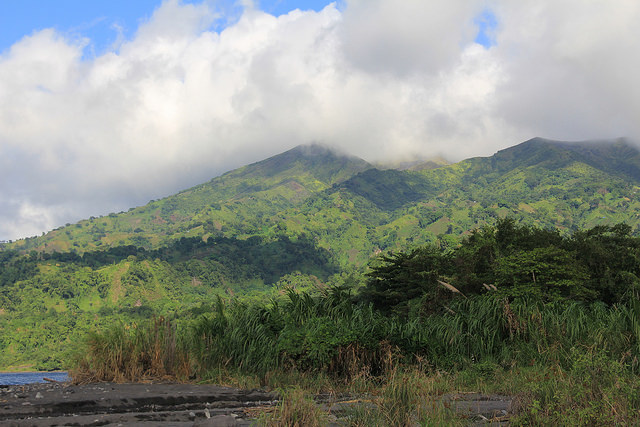 The government is denying that North Leeward is more suitable for the geothermal project and that politics played a role in its decision to locate it in North Windward, where three wells have failed to produce the required permeability.

Ellsworth Dacon, project director of the Geothermal Project, speaking on NICE Radio on Tuesday, said that the project proceeded on the basis of six feasibility studies between 1991 and 2012 and the lower cost of the North Windward site.

He said the most recent data showed that infrastructural works on the leeward side of La Soufriere, would have cost US$25 million before drilling could commence, compared to US$4 million on the windward side.

Dacon was speaking on the main opposition New Democratic Party’s “New Times” programme in response to West Kingstown representative, Daniel Cummings, who accused the government of taking the country on a “wutliss ride” in its execution of the project.

Cummings, who is the opposition spokesperson on energy matters, said that under the last NDP administration — which was voted out of office in March 2001 — a study was done on geothermal energy exploration.

He said the study indicated good potential for geothermal energy in the foothills of the La Soufriere volcano.

The study also noted the presence of hot springs in the stream in the North Leeward area, Cummings said, adding that this is an indication of the influence of magma coming quite close to the surface.

“There is no such occurrence on the windward side of the island,” he said, adding that based on preliminary study done under the NDP administration, the proposal was to explore for geothermal energy in North Leeward.

He said that the Unity Labour Party administration, “rather belatedly and hurriedly” wasted time by signing and extending a contract with a firm that had no knowledge or experience in geothermal exploration.

“Only when it was exposed that this was a fake company as far as geothermal energy is concerned, only then was that agreement made null.”

He said that the government then entered into an agreement with two companies – Emera Caribbean and Reykjavik geothermal —  for the exploration of geothermal energy in the North Windward.

Cummings said that the North Windward area was unexplored and unknown as the better option.

“And one has to ask a very serious question. Was this site chosen on the basis of the best technical advice or was it that the site was chosen based on a narrow partisan political decision,” said Cummings, a water engineer.

Cummings said he wanted the nation to understand the “quagmire” it finds itself in regarding the substantial investment and the raised expectation in the area of geothermal energy.

He noted that pomp and ceremony with which Prime Minister Ralph Gonsalves had announced a potential “game changer” in the geothermal project and his announcement of a proposed 25% reduction in the cost of energy with the completion of the project, which had a 2018 completion target.

“We can also remember him talking in the most braggadocious manner about being able to sell energy to neighbouring Barbados from this geothermal plant.”

Cummings said the government ignored the opposition’s warning to the Parliament that the government not allow private partners to invest their money in the exploration phase of the project.

“Nobody puts up money in a matter that is not guaranteed to produce results unless there is a guarantee for a sizeable rerun on investment. In other words, I put the money upfront, you guarantee me that whatever happens I am going to get back this money with a high rate of interest, I am fine. I put it up…

“And then, last year, all of a sudden, we are advised that one of the partners have pulled out without an explanation of why and on what terms and condition and whether or not they had been paid back for whatever investment was paid into the project,” Cummings said.

However, Dacon said GeothermEx, the last company to do a study, estimated a 90% probability that the heat resource on the Soufriere exceeded 43 megawatts and further recommended that due to the cost of infrastructure on the North Leeward side that the government should explore the North Windward end.

In response to Cummings question about whether the studies were surface studies rather than feasibility studies, Dacon said they were partly both.

He, however, said no core samples were taken and that surface-based studies looked for heat and made assumptions about the location of a fracture where there is possible permeability.

Cummings had noted that the government had proceeded to dig three wells, even after the first two did not find the required permeability.

He suggested that instead, the government could have done exploratory drilling.

Dacon said that slim hole drilling would give a temperature gradient but will not inform about permeability.

“So even if we went in the direction of a slim hole drill, the result would just give us what we got today: heat.”

He said that in that in geothermal project, the government was doing exploratory drilling using larger holes.

“So we didn’t do slim holes but it was still somewhat a test. So the assumption was if the initial studies were significant enough to give us enough evidence that we have a resource and fracture, that we should proceed with a larger bore well.”

He said that countries which do slim hole drilling are supported by a financial institution that requires the temperature gradient to ensure that there is temperature.

Regarding the financing of the project, Dacon said that 2% of the cost of the project was government money while 76% were grants.

“In fact, we had over $30 million in grant sources, about 18% was from the private sector and that went into the earlier studies,” he said.

“I’ve stayed away from political programmes because I never wanted this project here to be a political type.”

He said he did not know if there would have been a greater chance of success of the project on the leeward side of the island.

“I am saying that because there were surface manifestations on the leeward side, it would suggest that in that area you can find the source.”

“You have to remember that before US$25 million was going to be spent on the private sector. So they were not going to take any chance on this. These studies were done three times. They spent three years doing studies.”

Cummings asked Dacon if it was a fact that the preparatory infrastructural work on the leeward side was much more than on the Windward side.

Cummings asked Dacon if he would not want to use a site that potentially offers the best chance of developing energy; if that would not be driver rather than the initial cost.

“The problem with the site that we chose is not that we did not find fracture. We found fracture; we found permeable rocks. What is happening at the site is that the rock is behaving like elastic. It is opening up, it is discharging flow and it is closing back.

“So what we did when we stimulated the well is try to keep it open by breaking the fracture. So there is no idea that that would not have happened on the North Leeward end” he said.