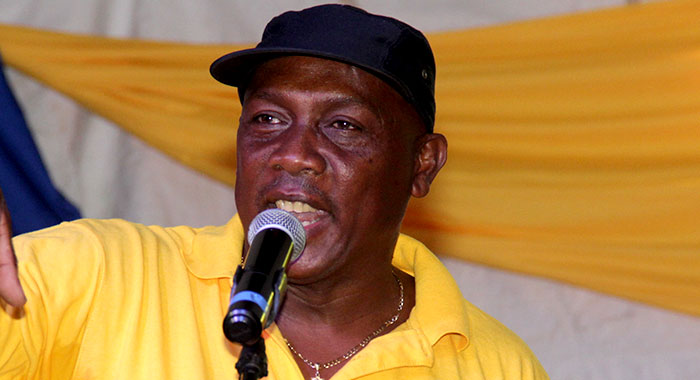 A “a loyal and committed general” of the main opposition New Democratic Party (NDP) says that Curtis King who is reportedly tipped to become a first-time candidate of ruling Unity Labour Party should not get his hopes up.

Lauron “Sharer” Baptiste, who opted out of electoral politics after failing to win the North Windward seat for the NDP in 2015, when he was a first-time candidate, said that there will not be two kings in the ULP; there is already a crown prince, and Caesar would not get his due.

“Brothers and sisters, we have a first-class candidate in West St. George; we do not have a backbencher candidate,” Baptiste said, referring to his wife, Senator Kay Bacchus-Baptiste, another first-time candidate.

Bacchus-Baptiste is hoping to wrest the constituency from the ULP, which has been representing it since 1998.

Baptiste has filed a petition against the declared victory of the ULP’s Montgomery Daniel, who has been representing the area since 2001.

That petition was dismissed for lack of evidence last year after a full trial and Baptiste has filed an appeal, the hearing of which is pending, with just nine months left in the constitutional life of the ULP’s fourth consecutive term in office.

“I want to tell you something, in the ULP, there will be only one king. So if you tell yourself that you go in there to be a second king, you’re telling a lie,” Baptiste, in reference to King said at the NDP’s virtual meeting on Tuesday.

“Ask brother Saboto Caesar; because he believed what is due unto Caesar must be given unto Caesar. But no way. And you can also ask Jimmy Prince because there’s already a crown prince in the ULP, so I don’t know where you’re really going.”

Caesar, who is into a second term as MP for South Central Windward, had once been thought to be tipped to be the next leader of the ULP.

However, some political observers say he has been eclipsed by Camillo Gonsalves, the prime minister’s son, who is into his first term as MP for East St. George.

In November 2017, the younger Gonsalves took over ministerial responsibility for the nation’s fiscal affairs, a post his father held since the ULP came to office in March 2001.

Baptiste told Tuesday’s meeting that things have changed in the last five years since he contested the polls.

He said back then, his friends who are ULP supporters repeatedly told him that the NDP would lose the election.

“Today, today brothers and sisters, these same people today, they are suffering, really suffering. They realise that they have made a big, big mistake,” Baptiste said.

“I met a lady last week. She had been diagnosed with cancer for three months now and can’t get an appointment at the hospital. This lady is staring death, or death is staring her in the face and there’s absolutely nothing that she can do about it.

“We have people suffering in this country since Tomas in 2010, [people] whose houses cannot be repaired up to today, all because they are perceived to be supporters of the New Democratic Party.

Baptiste said that the only thing that is going to get the NDP back into government “is for us to unite, for us to set aside the petty differences, because right now nothing else matters.

Baptiste said that West St. George is not a Labour constituency.

“It is a constituency that was built by sister Yvonne Francis Gibson and Brother Marcus De Freitas and we want back we territory and are we coming back for we territory.