Work to save the world-famous beach begins in July, the finance minister says 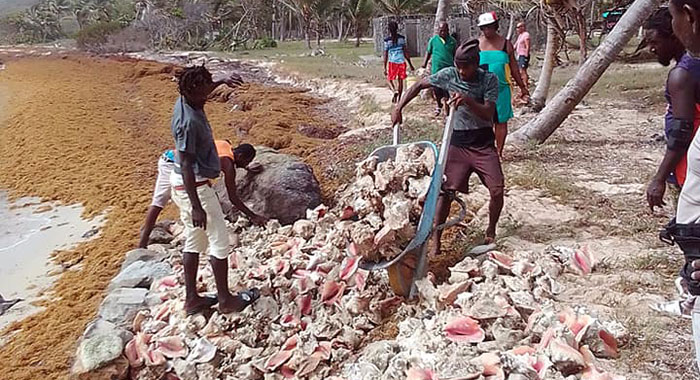 Amidst government inaction, residents had resorted to using boulders and conch shell in an effort to save Salt Whistle Bay. (Photo: Mayreau Regatta/Facebook)

The desperate efforts of residents of Mayreau to save the world famous Salt Whistle Bay is doing more harm than good, Minister of Finance Camillo Gonsalves told Parliament on Monday.

Gonsalves said that residents should desist from placing conch shells in the water there, adding that his government will commence a sea defence project next month.

“In the first or the second week of July, works will commence in earnest on Salt Whistle Bay. The specific commencement date and the duration will depend in some extent to which bidder is successful in the Tenders Board process and that would begin the temporary work at Salt Whistle Bay,” Gonsalves said during a ministerial statement.

“The long term planning, the title and bathymetric studies and the like ongoing to devise an optimal and attractive, long term solution to the problem,” he further said.

“So I’d like to inform the residents of the Southern Grenadines, particularly the residents of Mayreau, that they can look for work to begin in the first or second week of July on Salt Whistle Bay — the placement of boulders, large boulders and geotextile fabric in that area.

“I want to also plead with the residents of the Southern Grenadines to desist, in the meantime, from dumping small rocks and seashells along the coast there.”

Gonsalves said all of the contractors have indicated that they’re going to have to clean up “that mess, essentially, before they begin their work and that the small shells and small rocks being placed there are creating more of a problem than if they just left the sand alone because of the way it is battering these small things against the isthmus and increasing the potential erosion rate.

“So I request that you please desist now that the bids have been placed. They’re being evaluated this week, and work will begin on Salt Whistle Bay in the first or second week of July,” Gonsalves said.

Wave action on the windward side of Mayreau is threatening to completely erode the isthmus, and, potentially, destroy Salt Whistle Bay.

Salt Whistle Bay is vitally important to livelihoods on Mayreau, where tourism is the main income earner.

Gonsalves noted that the bay has been in the media a lot recently as it has been discussed in parliament many times.

He said that on Sept. 19, 2019, he visited Salt Whistle Bay along with experts in the Ministry of Economic Planning to discuss options and to consult with various residents and business owners adjacent to Salt Whistle Bay.

He said the government had consultations with contractors across St Vincent and the Grenadines in April and realise that a long term solution which involves a building up of the reef as a breakwater that currently exists naturally at Salt Whistle Bay would take a very long time and that there were a number of logistical challenges that would further extend the time within which the long term solution could be arrived at.

“Additionally, the contractors with whom we consulted all envisage very differing short term solutions to the problem, and indeed, many questioned the contours of the long term solution that we had suggested, in particular, that side of the bay gets a lot of sargassum seaweed and there were concerns that building up the breakwater at that point … may create a zone within which a lot of the sargassum would gather. And, you know, the stench involved in that regard.”

Gonsalves said some of the concerns raised necessitated additional analysis and study of the long-term solution.

Therefore, on May 31, the government chartered a boat with a number of contractors, officials from the Office of the Chief Engineer, engineers from the Ministry of Transport and Works and BRAGSA, engineers from the Regional Disaster Management and Vulnerability Project, and went to the bay to discuss and decide upon the most efficacious short term solution to protect the isthmus.

“The consensus after the May 31 trip was that the most readily implementable program would be a series of boulders right along the contour of the isthmus and various geotextile materials that would protect the bay while we implement the long term solution. The Ministry of Transport and Works formulated a single bid document.”

He said the tender went out on June 9 and the bids were received June 20.

Three bids were responsive and will be considered by the Tenders’ Board this week, Gonsalves said.