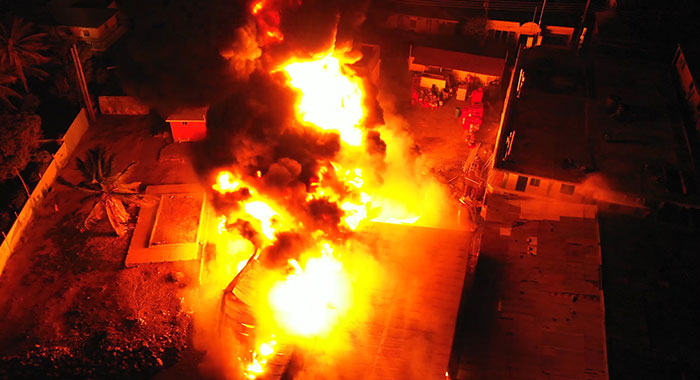 A Jeremie Tronet image of the fire in Union Island on May 19.

An investigation has been launched into the gas station explosion in Union Island that claimed three lives last month, Prime Minister Ralph Gonsalves has told Parliament.

Gonsalves was speaking on Monday in response to a question from Member of Parliament for the Southern Grenadines, Terrance Ollivierre.

Ollivierre said that on May 19, there was a catastrophic explosion and fire at the gas station in Clifton, Union Island that resulted in the death of three persons.

Two of the three burn victims — 14-year-old student Lindani Neverson as well as Freddy Naert, 72, the owner of the gas station — died on May 24, at the Milton Cato Memorial Hospital in Kingstown, where they were taken on the night of the fire.

Neart sustained first degree burns about his body while Neverson had second-degree burns.

The third victim, Graniqua “Azara” Alexander, 17, who suffered second and third degree burns as a result of the explosion, was flown to Trinidad for medical attention on May 24 and died on May 27.