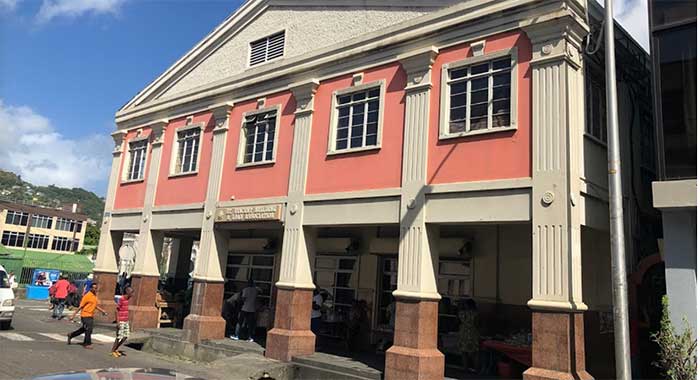 Eight years after now Minister of Health, Senator Luke Browne, then an economist in the Ministry of Finance, wrote a newspaper commentary that triggered a run on the St. Vincent Building & Loan Association (BLA), the cooperative is still financially distressed.

And one of the persons who is suffering as a result of the development is an 82-year-old woman who gave her name as Ms. Haywood, who, although ill and must buy expensive medication, cannot access her retirement investment from the BLA.

Prime Minister Ralph Gonsalves, who was then minister of finance, had defended that decision, saying that his government had written off the remainder of the EC$17 million that BLA owed his government.

Gonsalves had further noted that the BLA — which has been under the oversight of a state agency since 2012 — had made EC$12 million in operational profit over the two years ending October 2015.

Haywood has been presenting her case on WE FM’s “Issue at Hand” over the past few weeks.

In a call to the programme on June 21, she complained that it had been two weeks since she had been interacting with the chief executive officer, Elroy R. John regarding how she might access her assets deposited at the 79-year-old building society.

Haywood was impacted by a decision by members of the BLA, which remains under the supervision of the Financial Services Authority (FSA) — the state regulator for non-bank financial institutions — to convert certain types of members’ assets to permanent shares.

“I repeat myself. I never bought shares from Building & Loan. I am sick person. I am on expensive medication. I have to continue. Should I die for want of care for money that I put aside to take care of myself when I get sick? Do you think that is fair?” Haywood said on the programme, after speaking about the challenges she has been having accessing her funds,” Haywood said in her June 21 call.

“How you want me to walk up and down town with a bell ringing, an old woman like me, asking people to buy shares that I didn’t buy?” she said, referring to a suggestion by one of the host of the show, that she tries to get someone to purchase her shares, so that she could redeem the cash,” she said.

“Whose fault it was that her money was converted to permanent shares,” Haywood further reasoned.

In a call to the same programme that day, June 21, John detailed the history of the current challenges the BLA faces.

“I empathise with Ms Haywood’s situation but let us try and deal with this thing in an equitable manner,” he said.

Cecil Ryan, a host of the show, suggested that John meet with Haywood and find a way for her to redeem her shares.

“Mrs Haywood’s situation is not confined to her only. There are other members,” John said, however.

But Haywood again telephone the radio show this Sunday, saying that she was “not good” as John had called the programme on June 21, saying he empathised with her, but her situation remained the same.

“But if he was in sympathy to me, he would try to assist me with my problem that I have with Building & Loan. I have noticed that he has in the paper here for the weekend talking about people can get access to building house and you can get access to scholarship and those things,” Haywood said in apparent reference to a BLA advertisement in a local newspaper.

“I am not in that category. I am 82 years old, chronically sick. I am not looking to build a property, neither am I looking for scholarship because I don’t have anybody to give scholarships to. What I am looking for and want him, if he sympathise with me, is to help me to get my cash money that I put in Building & Loan and he take it and buy shares for me that I didn’t agree to.”

The moderator noted that it was a procedure and not John himself who had converted the money into permanent shares.

“I have to go to the drug store; I have medication that is over $200; I have to eat; I have light bill, water bill, have to buy gas and all like that.

‘the whole nation should march’

The host of the show suggested that Haywood write to the board of directors of the BLA outlining her case.

“I have done that all. I have gone through that process. I have gone from A to Z and I get no kind of help at all.  Nobody wants to have anything to do — in the meantime, I am the one who’s suffering.”

Haywood received sympathy for her situation from a caller who gave his name as Ras-I.

Ras-I contrasted the BLA situation with the collapse of British American and CLICO, adding that Gonsalves had intervened then.

He said that Vincentians feel it for Haywood who had lived and worked in the United States.

“Now she come home, she can’t get her money in this type of sickness?” he said in an apparent reference to the COVID-19 pandemic.

“And the prime minister giving people money for the same type a sickness — they can’t work? And she done work? Come on man, the whole nation should march. We don’t want them kinda system here, you know…

“Ah old lady wah [want] back she money. Please, please. Just like the virus changed the world, alyo call a board meeting and make sure that all poor people in St. Vincent way get they money in them institutions, please gi’ them they money before they pass. Please!  Because the younger generation dey to put money dey.  Dey doh need old people money, because yo’ done strong on it,” Ras-I said.

Meanwhile, in a call to the programme last Sunday, the prime minister said that “perhaps it has been forgotten by some that the Building & Loan Association is still a distressed financial institution.”

He said that the BLA was still trying “to get itself out of the difficulties”.

Gonsalves said that the building society has been making re-arrangements to help it “hold its head above water while at the same time continue to function so it doesn’t disintegrate and in the process, a number of individuals, like, for instance, our dear lady who is obviously very pained and we all have to be pained listening to her that she would like to have her money.

“The challenge is this: if everyone who is in a similar situation draws out the money, then the organisation will collapse because I am talking about the distressed state – or likely to, or to be severely undermined,” Gonsalves said.

“But, having said that, there need to be some recognition by the management at the Building & Loan to particular cases like this one.”

He said he has heard both Haywood and John on the situation.

“… and there has to be something which could be done more,” he said, adding that he does not know if the line of credit that the government had backed with the Central Bank in the early stages of the fiasco, which the BLA did not accept, “may still be needed to buttress and supplement”.

“… but it is a real difficult matter if you have put your savings in, you didn’t have anything to do with some of the decisions which were taken hitherto and resources — bad mortgages and all the rest of it, and which put the organisation under distress and instances of not proper management and so on and so forth and for persons now, like her, who have to  have this troubled situation in which she finds herself, or in which she is found,” Gonsalves said, adding that he was choosing his words carefully.

“I am choosing my words carefully.”

Ryan said he had suggested that the CEO meets with the woman and see if someone may buy her shares.

“It may well be that there has to be other interventions which may well be possible. And there are cases in which I have — have come to me and I have written and I have called the Building & Loan leadership to speak to them on the matter. So that’s all I would say. It is not as straight forward as my brother Ras-I who called, because of the distress in which the organisation has found itself.”

In 2015, Browne, who was making his second attempt to win East Kingstown for Gonsalves’ Unity Labour Party defended his decision in 2012 to write the newspaper article that triggered the run on BLA, saying that in doing so, he showed he has “the courage, and strength of character to deal with the tough issues”.