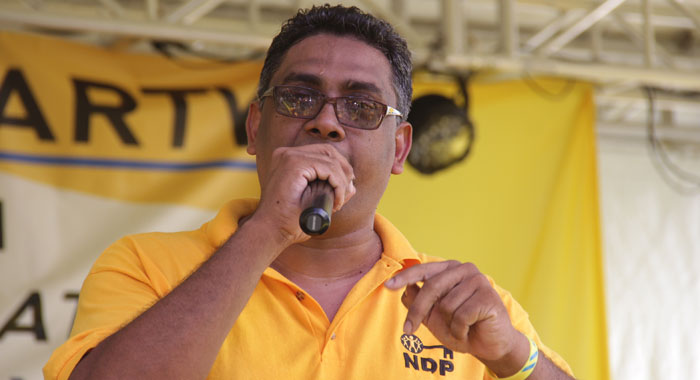 Curtis Bowman, who failed to win Marriaqua for the opposition New Democratic Party on his two outings at the polls — 2010 and 2015 — is making a bid for a third attempt to win the seat.

Bowman now faces internal challenges from Phillip Jackson — the public servant is the latest person to express interest in becoming the candidate — as well three other persons.

Also interested in becoming the candidate is former MP for the area, Bernard Wyllie, who was voted out of office in 1994, accountant Kirk Da Silva, as well as radio personality, Laverne Phillips, who is trained in international business.

He told iWitness News that while he believes he is the most suitable candidate, he would support the candidacy of whoever emerges from the selection process.

“I still believe that I am still the most suitable candidate to win the Marriaqua constituency on the NDP ticket right now,” Bowman told iWitness News.

“Fact being [that] I have more experience. I’m more confident, I am more popular. I am not green like when I just started. I mean, I had to make myself known; I had to go around and campaign through all the villages throughout Marriaqua, the 22 villages in Marriaqua.

“Now, Curtis Bowman, is a household name in the Marriaqua constituency and St. Vincent and the Grenadines at large but, in particular, Marriaqua,” Bowman said.

“People know me; I don’t have to go introduce myself again. Yes, I have to work harder, and even a lot harder than before. So basically, I think I’m the most suitable candidate right now. I mean, a newcomer coming in now, he has to jump in two years before he reached where I am today in terms of popularity and be known.”

Asked whether a different candidate would not benefit from whatever goodwill that there is towards the NDP in Marriaqua, Bowman said:

“Well, somewhat they will benefit from that but there’re still personal votes and I mean Marriaqua is a constituency that the people love to know who they’re voting for.

“And a matter of fact, I can say this. I mean, it might appear that I just start to campaign because I post pictures on Facebook. For the last four months, I’m on the ground every Tuesday for the entire day and part of Thursdays and weekends. I miss no the funeral. I just on the ground,” Bowman said.

Bowman has been using Facebook to spread his message, and, in one post, he said that the constituency needs a practical person.

“Someone who can get things done. Not an academic, nor an accountant or a publicist! We need someone who knows how to get along with and develop the vast majority of people from the Marriaqua Valley, an area once called the bread basket of SVG. I am that person!” Bowman wrote.

“I mean, basically what I’m saying it’s not that I’m getting personal against nobody. Everybody is needed this time around. It’s all hands on deck. And I appreciate the fact that we have so many candidates coming in. But basically, what I’m saying, you need a practical man on the ground that understands the needs of the people of Marriaqua. I mean, it’s not a personal attack on anybody. I just give the persons who are competing against me their title. It’s not that attacking their profession, or anything like that. I was just referring to the title, like they are a doctor, a pharmacist.”

Bowman noted that he did not say that the constituency does not need a pharmacist “but I say somebody who is practical.

Asked if he would say that the other potential candidates are “good people”, Bowman said,

He told iWitness News that he has said it before and he maintains that he could support the NDP’s candidate in Marriaqua.

“If I’m not the candidate, I will support whoever becomes the candidate in the Marriaqua constituency. But presently, I am the most suitable candidate right now. And I’m hoping that those other persons, who are showing interest that they can maybe see with me and come along with me and support me this time, play a supporting role. And that we can work together with all hands on deck so that we can bring home Marriaqua seat this time for the Democratic Party,” he said.