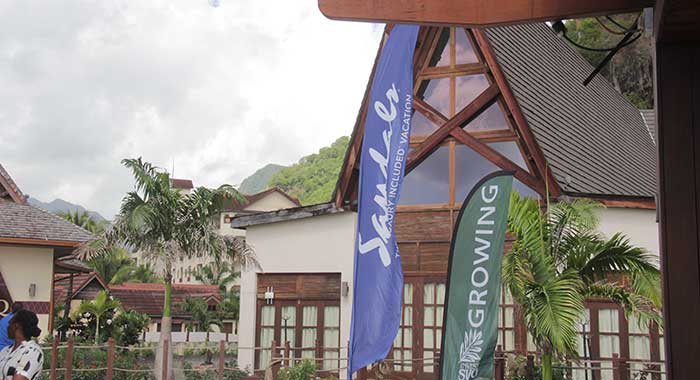 The government of St. Vincent and the Grenadines, notwithstanding Wednesday’s signing ceremony with Sandals Resorts International, owns the property at Buccament Bay that is formerly Buccament Bay Resort.

However, that will change soon, presumably in 90 days, when Sandals, which made a down payment on Wednesday, is expected to pay the remainder of the deal sum, to take full title of the property.

Minister of Finance Camillo Gonsalves, explained this to iWitness News on the side-lines of the signing ceremony as we sought to understand the current status of the property, which has been the subject of various legal proceedings.

The minister did not disclose the sum that Sandals will pay to acquire the property, but said it would be made public soon with the registration of the contract.

Buccament Bay Resort closed its doors in December 2016 when the state-owned electricity company, VINLEC, disconnected its electricity connection over the non-payment of its bill.

In the month leading up to the closure, workers had been protesting the non-payment of wages, which still remain outstanding.

Gonsalves told iWitness News that what was formerly known as Buccament Bay Resort occupied about 25 acres of land.

A few of those acres were owned by the state, including the beachfront where Jack’s Bar is located.

Beyond that, there were other pieces of land that were “in all manner of legal mess and dispute,” the finance minister said.

“On the footprint of the 24 acres, post-bankruptcy, KPMG, the bankruptcy trustee, was in charge of the majority of the estate, but there were 51 individual villas and condominiums in the tower that belonged to individual investors,” he said.

Additionally, the footprint of the tower and part of the conference facility were on land that belonged to Bernard Punnett.

Beyond the gates of Buccament Bay Resort, plots of land that were purchased by Harlequin, the company that owned the resort, belonged to Harlequin and went to KPMG as a bankruptcy trustee.

There were other lands belonging to farmers.

“So you have on the 40-acre footprint … a multiplicity of owners, and you also had land where you could not clarify who the owner was,” Gonsalves said.

“Either there was no title, or no deed, either existing or registered, or there were multiple persons claiming the same piece of land. Or indeed, there was money partially paid [either by Harlequin or to Harlequin], but not finally paid. So there are a number of disputes about the land,” the finance minister told iWitness News.

He said this was one of the main deterrents to the development of the resort, post-bankruptcy.

Since the resort closed in December 2016, negotiations with a number of potential investors fell through because of the legal status of the property.

However, Gonsalves said that over the last year, his government has been negotiating “with all of these players to ascertain essentially what they would take for their interest in the land.

“And I’m only talking now about people who had a legitimate, legal certifiable, verifiable interest in the land. And so we had to engage, for example, with the owners of the 51 villas and apartments, the overwhelming majority of whom live in the United Kingdom. So we had extensive conversations with them. And they agreed with us to a number that they would accept to relinquish their interest, in the villa.”

He said that KPMG had a number of very close deals with a number of investors that fell through.

“We use the number with which KPMG had essentially agreed at their past deals as a benchmark for what we think they (persons with interest/assets at Buccament Bay) would be willing to take.

“I’m not in a position to disclose that at the moment but you will disclose it very shortly because we have to register the contract. So the government doesn’t make a profit on the sale,” the finance minister said.

He told iWitness News that essentially, the money that Sandals pays for the property will go to the various owners of the land.

“Now, that doesn’t solve the problem, because as I told you, there are a number of plots of land for which ownership could not be determined. So it would be very difficult to convey that land to Sandals and Sandals will be subject to future legal challenges.

“So what the government decided to do, legally, even though we had agreements for price with all of the various players, we decided to acquire the entire footprint of land. And in the process of acquisition, the government gets clean title for the land, and then we convey that clean title to Sandals for the amount of money.”

In this way, any legal challenge would be against the government and not Sandals.

However, Gonsalves who is also a lawyer said that under the acquisition law of SVG, potential challengers would essentially have one year to make a challenge.

“So we acquire, and then we re-convey the acquired property to Sandals, so Sandals gets clean title. The money that Sandals pays to us, we distribute the money to the various players in accordance with the previously made agreements with all of them,” Gonsalves told iWitness News.

“Legally now, the government of St. Vincent and the Grenadines is the owner of the resort. Sandals has paid a deposit today, but they will pay the remainder of the deposit in — I don’t want to be held to this but I believe it’s in 90 days.

“So in 90 days, when they pay the remainder of the money, title moves to Sandals. But in the intervening period between the deposit which was paid today and the remainder which will be paid in 90 days, the government legally owns the property.”

Gonsalves, however, said the contract signed on Wednesday “has given Sandals permission and the ability to enter onto the property even before legal title vests in them, for them to begin rehabilitative work and all the rest of that, but for the next 90 days, the property is the responsibility and the property of the government of St. Vincent and the Grenadines”.