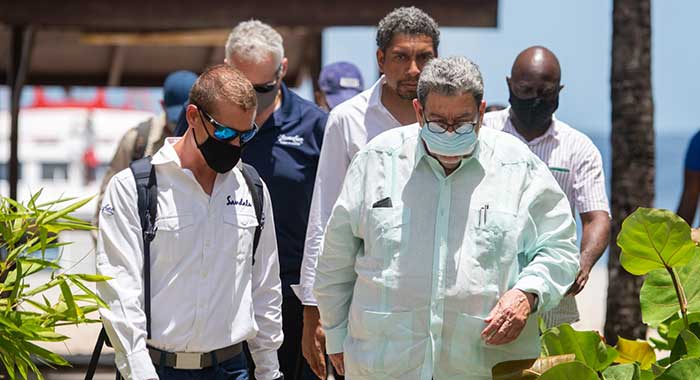 The government of St. Vincent and the Grenadines has told Sandal Resorts International, which has signed a contract to take over the former Buccament bay Resort, that all beaches in the country are public.

At the signing ceremony on Wednesday, Adam Stewart, deputy chairman of Sandals, announced that the new resort will be operated under Sandals’ “Beaches” brand.

SVG will join Jamaica and Turks and Caicos as the Caribbean nations with Beaches resorts.

Minister of Finance, Camillo Gonsalves, speaking to iWitness News on the signing ceremony was asked about beach access when Sandals resort begins operating.

The minister, who helped to bring Sandals to SVG, said:

“We made very clear to Sandals at the beginning of the process and the Prime Minister reiterated today in the tour that was given to Sandals that beaches in St. Vincent and the Grenadines — not ‘Beaches’, the brand but beaches — are accessible by the public and Sandals is fully understanding of the law here. So the access road going over to the beach would remain in effect.”

When Buccament Bay Resort first opened a decade ago, some issues of beach access arose in which security personnel at the resort would tell members of the public that while they can go to the beach, they could not use a bridge the resort had constructed to get there.

Before the resort was constructed, persons used to wade across the shallow river mouth to get to the preferred section of the beach.

However, as part of the construction of the resort, a river defence was built on the bank of the Buccament River that bordered the resort, making it practically impossible to access a part of the beach without using the bridge.

Buccament Resort closed in December 2016 when the state-owned electricity company cut its power supply over non-payment of the bill.

Gonsalves welcomed Sandal’s involvement in the resort, which is currently the property of the government of SVG until Sandals, which has paid a deposit, makes the full payment.

Gonsalves said that the receivers, KPMG, “worked very hard, but there are a number of legal issues that they could not resolve on their own.

“It had gotten to a point where we were wondering if there would be a facility left to salvage given the time that had elapsed and the deterioration of the property,” he told iWitness News.

“So I’m glad that we were all able to work together. And I’m glad that all of the interest holders, I want to be — I want to express sincere gratitude to the good faith, and cooperative nature, of all the discussions that we had with KPMG, with the British owners and investors, with the local farmers, with Mr. Punnett and everybody who has been involved.

“I don’t think anybody got exactly what they wanted, but I think we reached amicable solutions with everybody and for an entity like Sandals in this time of global uncertainty when most of their resorts are still closed, when half of their workforce is still furloughed, to come and make this sort of commitment and make this sort of an investment is an incredible expression of confidence and faith in their own ability to rebound and in the people of St. Vincent and the Grenadines.”

The finance minister said that the resort “has not generated the jobs and revenue that we would have wanted it to over the last few years and now we see a light at the end of the tunnel.

“In fact, we’re where we are in the moment, we see the way forward. A lot of people thought that this day would never happen. Words like white elephants were being tossed around. But the government persevered. We found a good partner. And then we did the hard work that had to be done to make this facility viable again,” Gonsalves told iWitness News.