3 Vincies graduate as doctors in Cuba 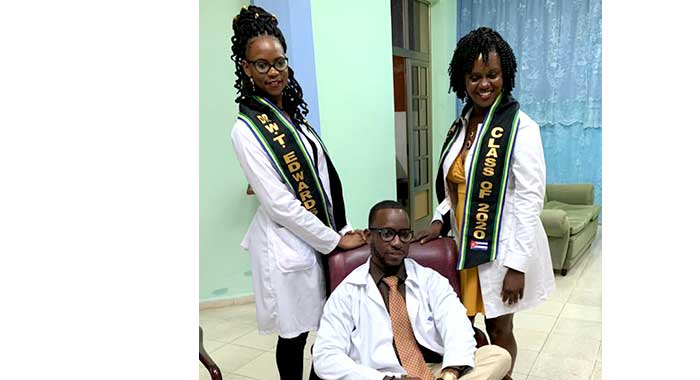 Three Vincentians graduated as physicians from Cuban universities last Thursday, with one of them, Winnique T. Edwards, awarded the University of Sciences and Medicine, Granma’s Prize for best All Round Graduating Foreign Student.

Edwards and Jahmito James graduated from that university, which came after a similar ceremony at which Angelique Kadeen Stewart graduated from the University of Medical Science, Carlos J. Finlay.

Stewart was also awarded the university’s prize for Most Integral Foreign Student for the Faculty of Medicine.

Ellsworth John, St. Vincent and the Grenadines ambassador to Cuba, in speaking to the new doctors, before the ceremony, expressed profound delight at their achievements.

He said that each of the three had shown great determination to not just complete their degrees, but also to make the very best of the opportunities in Cuba.

John said the three doctors have exemplified the spirit of the scholarship whereby they embraced the challenges of studying in Cuba and channelled their energies to learning every aspect of the country they made home for seven years, traveling the country and participating fully in activities organised by the school.

This, he noted, was evident by the awards they have received.

The three graduates also came in for high praises from their professors, who acknowledged the hard work and dedication of the doctors.

Edwards, James and Steward said they are looking forward to returning to St. Vincent and the Grenadines in mid August to begin their careers in medicine.

“The Embassy of St. Vincent and the Grenadines in Cuba wishes them the very best,” a press release said.

6 replies on “3 Vincies graduate as doctors in Cuba”