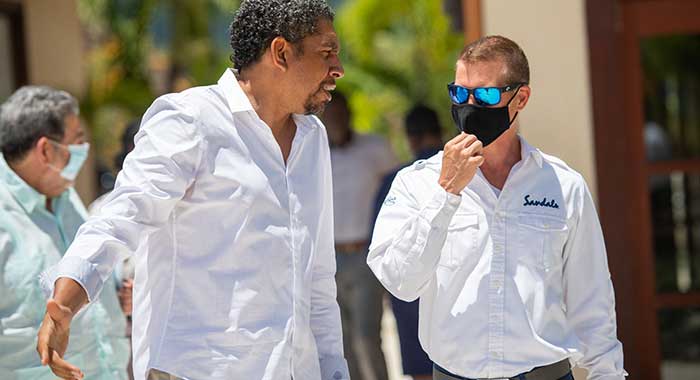 Minister of Finance Camillo Gonsalves, who led the negotiations with owners whose lands near the resort in Buccament Bay the government has acquired, says the landowners agreed with the government’s offer.

Gonsalves was speaking on WE FM on Sunday,  two days after Shaka, a farmer whose land has been acquired, said that he is willing to sell his 1.5 acres of land for the Sandals hotel development, if he is paid EC$1.5 million.

Shaka’s asking price is about EC$100,000 more that he had been offered and refused about 15 years ago, as Buccament bay Resort, which Sandals is taking over, was being built.

He told iWitness News that Gonsalves told him that the government is willing to pay him EC$10 per square foot of the land.

Last Wednesday, on the sidelines of a ceremony where Sandals and the government signed a contract for take-over of the resort, Gonsalves told iWitness News that the government had acquired the lands in the area.

He said that the government would then give Sandals clean title to the lands, thereby insulating the international hotel company from litigation relating to Buccament Bay Resort, which has been closed since December 2016.

During his call to WE FM on Sunday, Gonsalves was asked to respond to Shaka’s statement that sale of his land had not been settled.

“The way I would respond to that is to say that I have not said any lies today about coming to agreement with everyone,” the finance minister said.

He said he had met with Shaka as he did with the other landowners.

“But I wouldn’t want to conduct any further discussions on the airwaves in that regard. I think that Ras Shaka very clearly expressed, as did Ras Granville, who was there and Big Ras, all of the farmers expressed very clearly, their interests, their historical ties with the land, what they considered to be fair,” Gonsalves said.

He said that some of the farmers asked for a straight pay out of money.

“And we sat down with each of the players, and we shook hands on agreements, and if there’s a need to revisit or to discuss any of those deals, again, based on people having second thoughts or whatever, we’re perfectly willing to do that and we’ll do that in the coming few days.”

The finance minister said he would not want to discussion on the airwaves “any particular point made by an individual, and I certainly wouldn’t want to have a negotiation on the public airwaves about those matters.

“But we’re fully committed to coming to not only an amicable but a fair resolution with all of these matters. We’ve heard what you have heard, and we have sent officials to verify the truth of our understanding about how these deals were crafted and where the agreements lie. And we’ve had those conversations and we expect early in the week to, to be able to announce a fully amicable solution to all of your issues.”

iWitness News understands that Shaka learnt of the acquisition of the land when someone called him Friday afternoon indicating that the government had already published the acquisition notice thrice in the Gazette, as the law prescribes.

iWitness News was able to verify that the acquisition notice had been published twice in the Gazette and Gonsalves also confirmed this in his call to the radio show.

He said that in his conversation, he was using “acquisition” in its legal sense, in accordance with the Land Acquisition Act.

iWitness News understands that two of the landowners, namely a farmer and a non-farmer, have sought legal advice on the matter.