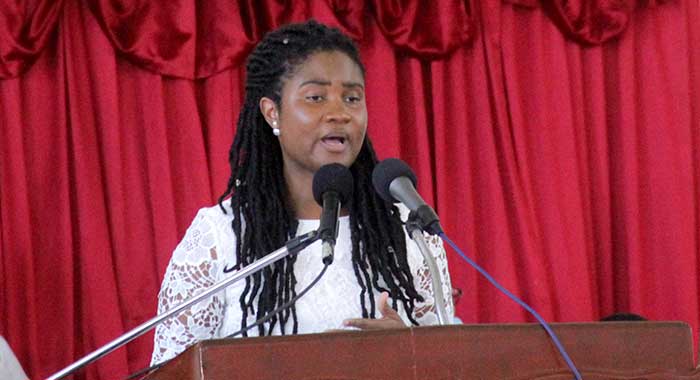 Shara Balcombe, daughter of Jerry S. George, pays tribute to him at his funeral in Kingstown on Saturday. (iWN photo)

The death of broadcaster Jeremiah Samuel George, better known as Jerry S. George, on Aug. 4, while he was hosting his Facebook show, was “shocking” and “painful” but was “not tragic”, his daughter, Shara Balcombe, told mourners at his funeral in Kingstown on Saturday.

Just about 100 persons were invited to pay their final respects, in-person, at the funeral of the man who lived the last decades of his life in the public’s eye, but had requested an intimate funeral.

“Daddy lived and lived well. He lived his life on his terms with no apology,” Balcombe told the funeral service at the Kingstown Evangelical Church.

The mourners at the church included Governor General Susan Dougan, and former Leader of the Opposition, Arnhim Eustace, parliamentary representative for East Kingstown, where George lived.

In her tribute to her father, Balcombe said that George was “blessed to have experiences that many never will, no matter how long they may live.

“And it is my guess that if he were to choose his exit, that perhaps, this is exactly what he would have chosen and honestly, I can accept that.”

George, 62, is believed to have died shortly after he told Grenada based, Jamaica-born journalist Beverly Sinclair, his guest on his Facebook Live Show, Early in the Morning with Jerry S. George, “I’ll step out of the frame, eh. Okay? You go ahead.”

He then switched the feed to Sinclair’s feed, and she continued with the programme, during which George had suggested that he had been having some technical difficulties, including with a mouse that needed changing because it had been “misfiring” a lot recently.

iWitness News understands that an autopsy concluded that George died of a heart attack.

Balcombe said that George’s death was not tragic as, “we never saw him old, frail, suffering and wasting away or unable to recognise us.

“He will always be the vibrant soul with that carefree laugh in our memories and he would want it that way.”

She noted that her father did what he loved until the day he died.

“He always told his children that he was proud of us and he loved us and there wasn’t anything left unsaid.

“He saw us grow up and achieve what we set out to and he was there to help.

He was able to take care of his parents and to see that his mother was comfortable after my grandfather passed.

And of course, he saw his grandchildren, who he was so very proud of and loved with all he had.

“So you see, there’s no tragedy here,” she said.

Balcombe said that George, unbeknownst to himself, was preparing his children, the other of which is his son Daryl, for the day they would have to go on without him.

“He taught us, in his own special way, how to be fiercely independent, to chart our own course and to succeed. He can rest in perfect peace knowing that we will do exactly as we were taught,” she said.

Meanwhile, Daryl, who lies in the United States, was unable to return for the funeral, and his mother, Jerry’s widow, Valerie George, read his tribute.

Daryl said that his father was a man who loved to express his views on any given topic.

“He was also a man who loved carpentry and admired skilled woodwork wherever he saw it. But above all else, he was a man who loved to lend a helping hand to others. He was great at networking and forming connections with people in different countries.

“He was never shy when it was his turn to speak. Whenever he spoke, you knew where he stood on the topic.”

Daryl said he benefited from the 6 a.m. daily devotions at their home — when he was in primary school — during which Jerry would “break the Bible stories down into something fun and digestible for us since we were so young at the time, but he would always drive home the point of the story and how it could apply to us.

“These Bible study sessions are currently paying off as they give us peace, hope, and faith at a time such as this,” Daryl said.

He said he would often seek his father’s guidance when it was time to make a big decision, or when he had an interview with a company.

“He never really gave motivational speeches, but he would give you some direction that may help. I recall telling him about one of my projects in university and how I was struggling with it. His response would go something like this: ‘Daryl, we live in an

age where information is at your fingertips, learn to search with the tools you have, and figure it out.’ Plain, simple, and very direct.

“At this point, I would just go and cry about it to mommy so I would feel better. But that is how he was, tough love. He taught us at a very young age to stand up for what we believe is right and to remain humble no matter how high life may take you.”

Daryl said he last spoke to his father the evening before he died, when he called to warn about Hurricane Isaias since Maine, where Daryl lives, looked to be in the storm’s path.

“He wanted to make sure I was prepared and had some plan if the coastal Maine area was going to get hit. I jokingly reminded him I survived running around in Florida for the last four years and wondered if he forgot that I have common sense.

“I wouldn’t be Daryl if I didn’t give my parents some cheek for the fun of it. The following

morning shortly before he passed, he made sure to call my aunt in Florida and asked her to check in with me to make sure that I was prepared since I gave him cheek. I never imagined that that would be the last conversation I would have with my father.

“However, knowing that I was on his mind before the sun even came up that day, and knowing how serious my safety was to him, simply shows how much he loved all of us. That is the love I will always remember my father giving me. I love you pop, and without a doubt, I know you are resting in peace,” Daryl said through his mother.

George was buried at the Kingstown Cemetery.

One reply on “Jerry’s death ‘shocking, … painful’ but ‘not tragic’ — daughter”