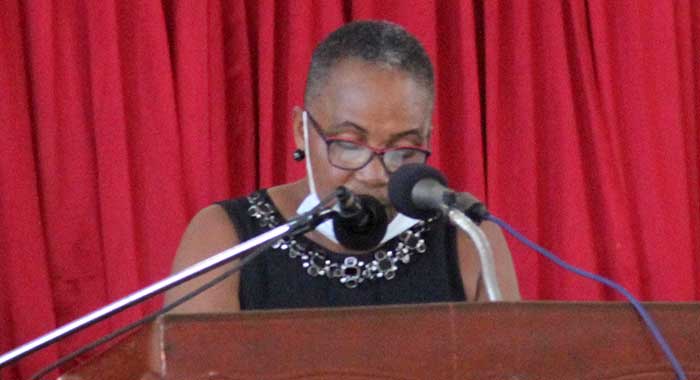 Valerie George, widow of broadcaster Jeremiah Samuel George, better known as Jerry S. George said that her husband made trouble, but it was good and necessary trouble.

George, 62, a broadcaster of regional fame, died suddenly on Aug. 4, while hosting that morning’s episode of his Facebook Live show “Early in the Morning with Jerry S. George”.

At his funeral held on Saturday which mourners attended in person by invitation only and broadcast live on the internet, his widow, Valerie, said that her husband “loved life and lived it to the fullest.

“He made friends easily and once you met him, it was as though you knew him all your life. He loved a good joke and always saw the funny side of things first.”

The widow said that George was an excellent craftsman, an art he learnt growing up in his father’s carpentry shop.

He put his skills to work and made their daughter a lovely crib when she was born.

“He enjoyed using his talent for those he loved. He was very much the artist as well and has left us with some beautiful paintings,” Valerie said, giving insights into aspects of Jerry’s life that might not have been known by his audiences.

“Jerry made me a better person; he challenged me to think deeply as to what were the most important things in a marriage.”

She said that early in their marriage, Jerry would invite her to go out and when she said the timing was wrong because of housework, he would say, “Val, just leave them and let’s go; they’d be there when you get back.

“He was an avid reader, there were books all over our home, oftentimes on our dining table and many times, I was tempted to ask which one he’d like to have for lunch.”

Valerie said that Jerry was “a consummate teacher”.

“He loved to share his knowledge and had the uncanny ability to break down even the most complex subjects into a form that was easily understood. I enjoyed the Sunday evening Bible study sessions which we hosted at our home many years ago. When he was finished giving an overview of a chapter or book, you wanted to read it again.”

The widow said that as a father, Jerry knew how to become a child again and did the things his children wanted to do to make them happy.

“He taught us that money did not grow on trees nor did it flow from a pipe. He was not interested in spoiling his children as he believed children who have money thrown at them become entitled adults, something which he could not stand.

“I believe the most important thing they would remember about Jerry is him grounding them in the scripture early because he firmly believed that “the Word of God will not return unto Him void.”

Valerie, a nurse, spoke about how she returned home on the morning of Jerry’s death and was unable to get into the house because the chain was on the door.

The widow said that after standing on a car to improve her line of sight, she had seen “just Jerry’s feet lying there”.

Rommel DeFreitas, one of their neighbours was able to gain access to the house by using a ladder to climb through a window.

“God used Rommel to protect me because had I walked into that house that morning and just saw Jerry lying there, I don’t know what the result would have been today,” the widow said.

Jerry is believed to have died moments after telling the guest on his show, “I’ll step out of the frame, eh. Okay? You go ahead.” and switching the screen to her camera.

On at least three occasions in the approximately four minutes that he had spent on the show that morning, Jerry was shaking, apparently involuntarily, and on one occasion, he bit his lip, in apparent discomfort.

iWitness News understands that an autopsy concluded that he died of a heart attack.

Valerie said that before Jerry’s death, they had spoken about death, “especially with things like COVID going around and we literally spoke and said what kind of funeral we wanted because we saw being buried and only had one person with them.

“Jerry said, ‘Val, it really doesn’t matter who is there, you know. I’m gone and I know where I am going so it doesn’t matter.’ He said, ‘A small crowd would do. Keep it small. I don’t want the funerals I see around.’ He said, ‘They are no longer funerals. They are something else.’”

“Jerry wouldn’t want you to cry; neither would he want me to cry. He’d say, ‘Val, Shara and Daryl, get on with your life,” she said, referring also to her children.

Jerry was buried at the Kingstown Cemetery.