‘I am here to win an election,’ Friday says of Marriaqua candidate selection 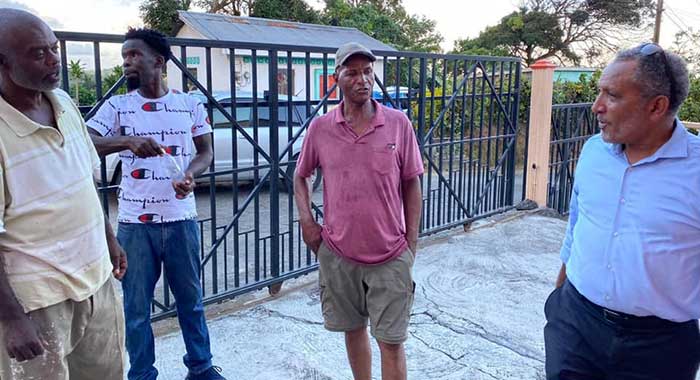 President of the opposition New Democratic Party, Godwin Friday has defended his decision to urge the party’s central committee to endorse a candidate for Marriaqua different from the one recommended by the constituency division.

“I am not here to make a political statement. I am here to win an election. That is what I want to do first and foremost,” Friday said Monday on his weekly programme on NICE radio.

Last Thursday, Friday advised  the central committee to not ratify Kirk Da Silva, the proposed candidate, who had won 15 of the 29 votes cast at the primary on Aug. 11.

Da Silva, who joined the NDP after failing to become a candidate for the ruling Unity Labour Party in the 2015 elections defeated three other contenders.

Among them was Bernard Wyllie, a former MP for Marriaqua under the NDP, who was voted out of office in 1998.

The other contenders were Curtis Bowman who failed to win the seat in 2010 and 2015, and Phillip Jackson, who was making his first bid to become a candidate.

At the primary, Wyllie secured eight votes, Jackson got four, and Bowman two.

But Friday said that he heard the response to Da Silva’s performance at the constituency level and decided to visit the area and interact with constituents.

“And when the central committee made its decision, that was the directive, essentially, that I laid down, because that is my duty as the leader of the party; we can’t do anything without ultimately coming to office, winning government.

“And that is what people in the constituency say; that this is the candidate,” he said of Wyllie, whose candidacy Friday asked the central committee to ratify.

“Whatever else we may have to say about having a new candidate or somebody who passed through the first process and so on, ultimately, what we want to do is to give the people in the constituency what they want, because they’re the ones who will win the election.

Friday, has been Leader of the Opposition since November 2016, and has been MP for the Northern Grenadines since March 2001.

The NDP is facing the electorate for the first time with Friday at the helm, after four defeats under the leadership of Arnhim Eustace, MP for East Kingstown.

“And so we go forward, the main task that we have now is to win the election. We have given each constituency the best candidate who has a chance of winning that for the constituents, and for the New Democratic Party. And then we change the government and go forward to change the country,” Friday said.

The opposition leader said that what took place in Marriaqua is in keeping with the NDP’s constitution and it was not the first time in the history of the 45-year-old party that there had been such a development.

“… there has been some, I think, some misinformation and misunderstanding about the process in our party, we do things as much as we can as closely as we can to our constitution, because we are building an institution here, in the New Democratic Party, it’s not just a one-man rule kind of thing.

‘the man of the moment that the people prefer’

Under the NDP constitution, the central committee has to ratify the candidacy of any person who does not secure 75% or more of the votes.

In Marriaqua, 30 persons were eligible to vote, but 29 turned up and Da Silva gained 15 of the ballots.

“So just over 50%. And so there was, as you know, a lot of discussion, a lot of, I would say, commotion, in the constituency about the selection,” Friday said.

“And as leader of the party, I did the responsible thing that I am required to, go and to listen to the people. I made the determination based on the information which I gained,” he said, reiterating that he acted within the NDP’s constitution.

“And as difficult as it is as a decision to make to recommend to the central committee somebody else not selected by the party group at the constituency level, when it gives a party a better chance to win, that is what I will do because I want to win.”

He said that at the central committee meeting, the three other candidates withdrew from the process, leaving only Wyllie to be ratified.

“And that’s what it was and this is the process in our party and one that we went through, but it’s one that was geared towards getting us the best chance to win,” he said, noting that some persons have noted that Wyllie is coming back to politics after many years and if that is what the NDP really wants.

“I think that all of the candidates from Marriaqua who put themselves up were very capable people, and it could have been any of them. Bernard Wyllie happens to be the man of the moment that the people prefer, by a far margin, in the constituency, on the field, as the best person to give us a chance to win the election,” Friday said.

“He has experience in the past in government so that also would be extremely useful to us in government when we win the election. The main reason is we need to win and we give ourselves the best chance to win. So that’s where that’s at.”

The opposition leader urged the electorate to vote when the elections, which are constitutionally due by May 2021, are called.

“There’s one thing for sure, there’s one way to prevent change, is for people to tell you that you can’t make a difference. And if you believe that, then the change won’t come. But I know that the people of this country don’t believe that because that’s what I see.

“Everybody’s telling me they’re waiting for the opportunity to make this decision. And so I am doing all that I can to give them the best chance of changing the government. And this is why we are doing what we are to get our candidates all selected,” he said.

3 replies on “‘I am here to win an election,’ Friday says of Marriaqua candidate selection”