Teachers urged to ‘count the cost’ before entering politics 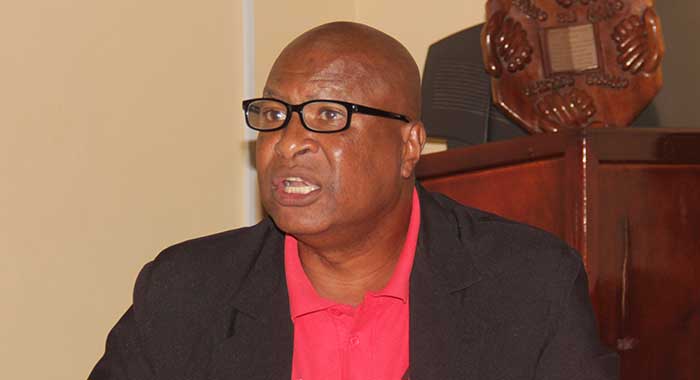 The St. Vincent and the Grenadines Teachers’ Union is urging the nation’s educators to “count the cost and take” note before entering electoral politics.

Union leader Oswald Robinson made the point as he noted that the government has refused to honour an agreement with the union that should see teachers return to the classroom with all benefits intact, if they fail at electoral politics.

“And there some teachers now I understand going in to run, so you need to count the cost and take note of that. Because if Kenroy Johnson can’t get his pension and gratuity up to now, you’re punishing somebody for which they have not done anything wrong. Pay attention to that because it seems as if it is taking donkey years before you could even be considered, to obey the court,” Robinson told a press conference last week.

He called on the Ralph Gonsalves government to honour the court’s ruling and pay Johnson.

Johnson was one of three teachers who resigned ahead of the 2010 general elections to contest on behalf of the opposition New Democratic Party (NDP) but was not rehired, notwithstanding a collective bargaining agreement that the union had signed years earlier with the Ralph Gonsalves government.

The court has since ruled that Johnson, as well as Elvis Daniel and Addison “Bash” Thomas, the other two of the “three NDP teachers” must be paid their gratuity and pension when they reach retirement age.

Johnson has reached retirement age and is still waiting his pay-out.

“It is total wickedness that the government is in contempt of the court. The court has ruled. The judge would have ruled. It’s time for compensation. It’s time to pay the man,” Robinson told a press conference last week.

“It’s not easy — you work for almost 40 years, contributing to the development of education in your community. And then because you’re on another political fence, people don’t want to ensure that you enjoy your property.

“Pension is a property. It is enshrined in the Constitution and the judges have ruled that the man should get his property,” he said, noting that Thomas and Daniel are yet to reach retirement age.

“… He (Johnson) is such a humble man, would have given tremendous sacrifice and because he ran for political office, and he lost, you don’t want to give him back his job…”

He noted that the government signed a collective bargaining agreement with the union, which should have preserved the three teachers’ benefits but Prime Minister Ralph Gonsalves later said the agreement was “aspirational”.

“Who can you fool? And we have agreed that there were persons who ran for political office even before we signed a collective agreement with that clause intact,” he said, adding that teachers, including Daniel, Nicola Daize, and Ruth Woods were given back their jobs after they lost in general elections.

It was noted to the union that at least one current teacher is likely to become a candidate in the next general election and a retired teacher who has been declared a first-time candidate.

Robinson had been asked if the union had a position on teachers getting involved in politics.

He said that the union does not get involved in endorsing teachers who become politicians, noting that there are teachers who support each of the political parties in the country.

Robinson, however, said there is a clause in the union’s constitution that has never really been implemented.

“But let’s say the authorities decide to take us for granted and the membership feels that we must speak publicly, then the union will do so if it becomes necessary. That clause says that the union can exhort influence on its members on matters of national importance.

“Election is a matter of national importance. So the union can make that statement, but we have not done so and I don’t think we may want to do so because it may divide the union just like in the days of Joshua and Cato, when Joshua want you to go one way, promising the increase in salary in 1975 and …  and the politicians were getting into the union…

“But under my leadership, I am not and I’ve never done it. And I have no intention to say to any teacher who to vote for. That is your business. If I want to support you, as a teacher, for your policies from a party standpoint, that’s my individual right to do so. But as a union, if the union wants to make a statement, the union can do so.