SVG mulls next step as geothermal drill leaves for Spain 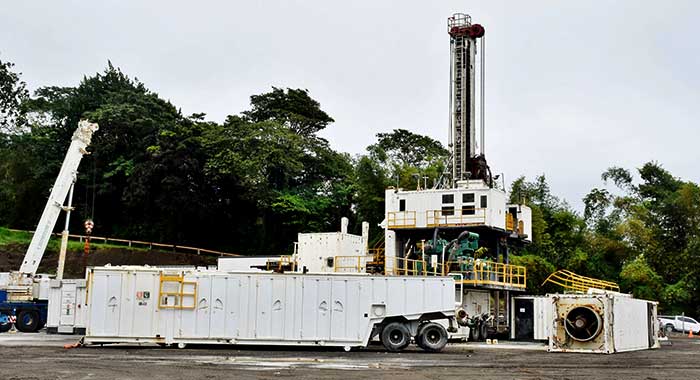 The government is considering other options as the three wells dug on the slopes of the La Soufriere volcano as part of the geothermal energy project have failed to produce the require permeability.

The wells have registered a temperature of 250 degrees Celsius, but the rocks do not have the level of porosity that would allow for converting that heat into electricity.

Further, the Icelandic firm that owns the drilling rig has demobilised it and has begun shipping it to Spain for its next project, Kingstown having given instructions since March 16 to halt drilling.

Speaking on NBC Radio on Sunday, on a programme dedicated to updating the public on the project, Ellsworth Dacon, the project manager, said the government is in discussion with a company that has “a model like a radiator, like a motor car radiator.

Dacon, however, said this requires horizontal drilling underground and is quite costly.

Another company has a patent for “some optical sensing device that can sense where the permeable areas would be,” Dacon said.

“And they are bringing the capital. As developers, they have indicated to us that they have the capital to take it forward,” he said.

He said a third company specialises in well stimulation and believe that they can stimulate the three wells “enough in a method that is safe to enhance and increase the flow of the fluid.

“We have to examine with the bank all the environmental concerns but, more importantly, the cost.”

Dacon noted that all of the options come with a cost and the price would determine the government’s financial decision.

“… we have to work within the target prices. It makes no sense [to] say yes, we have a geothermal plant and we have signed a new deal with a new company and at the end of the day, it is not cheaper for Vincentians.

“So we have a particular financial model that we must work within and we have a target. So we have to look at capital assumptions with some contingencies and stipulate what are our conditions. And one of the conditions is for cheaper electricity to consumers,” Dacon said.

The government has secured the US$92 million needed to finance the entire project, with a small portion of it coming from public funds, and the remainder as grants.

Dacon said that he would not say that the money spent on the project was a waste of resources.

“First of all, we did get grants and grants are usually paid by taxpayers somewhere. It may not be by Vincentians but they are some contributions, perhaps from taxpayers. So we have to be very responsible, even in the use of grants and I think we were.

“It’s a hypothesis. We did all the background checks, we did all the scientific work, we had a theory and we believed it to be here and we weren’t successful in finding the permeability. I have heard and I have seen a WhatsApp question about why did we go into the larger drilling of wells versus what you call slim hole drilling.”

He noted that some persons have said that the government should have dug exploratory wells, also known as slim holes.

Dacon said that a slim well is cheaper, requires a smaller crew and uses less cement.

“We were drilling into a very deep reservoir diagonally. And to access that permeable zone, we could not have done slim well drilling… It is not a case where we spent more than we needed to spend.”

He said a slim well would have cost US$2 million while a permanent hole costs US$8 million.

“But we just couldn’t access the permeable zone using the slim well.”

He noted that the government would have had to mobilise a smaller slim well drill then demobilise it.

“So, at the end of the day, it would be more expensive to result in more or less the same.”