Teachers who became MPs have not advanced profession – union 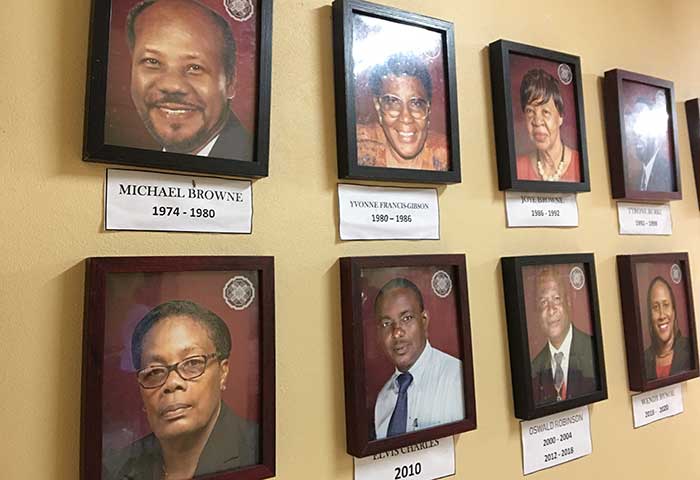 Mike Browne, Yvonne Francis-Gibson, and Elvis Charles, are among the former teachers who have become Members of Parliament. (iWN photo)

Teachers who have entered politics in St. Vincent and the Grenadines (SVG) have not done much to advance the profession, the Teachers’ Union says.

One teacher and a retired teacher are among the first-time candidates in the next general elections, expected by year-end.

They join other politicians including career educators, and persons who have taught at some point in their career in the political arena.

Among them is Curtis King, a retired educator who is the candidate for the constituency of West St. George for the ruling Unity Labour Party.

During his career, King was a vocal on matter relating to the teaching profession and was an active member of the SVGTU.

King has pledged his support for an administration that had turned its back on a collective bargaining agreement it signed with the union that had allowed teachers who fail at the polls to return to the classroom with all their benefits intact.

Three teachers who contested the polls on behalf of the opposition New Democratic Party (NDP) in 2010 were not rehired when Prime Minister Ralph Gonsalves said that the agreement his government signed with the teacher’s union was aspirational.

The union went to court and the court ruled that the three teachers must be paid their gratuity and pension, when they reach that age.

However, at a press conference last week, president of the SVGTU, Oswald Robinson, noted that Kenroy Johnson, one of the three teachers, who has reached retirement age, is yet to be paid his benefits.

Robinson was asked whether he was confident that should King be elected that he would act in the interests of teachers based on their professional and personal interaction.

“Sad to say, they have been penalised if they ain’t win for the party in government,” Robinson further stated.

He, however, said that Article 16, the election leave article, was adopted from a 1996 International Labour Organisation-UNESCO document, “Recommendation Concerning the Status of Teachers”.

“We paraphrased one of those articles and made it almost synonymous with that article. That article said teachers must be encouraged to run for high office, political office, with all benefits intact,” Robinson said, adding that St. Vincent and the Grenadines is among the countries that signed on to the ILO-UNESCO document.

“But they only use certain parts of it when it is convenient,” he said.

“So if the brother wants to run for political office like all the others, I say, I wish you every success. It doesn’t have anything to do with me, nor the union, or which political party. I wish you all the best.

“But the history of teachers who have gone into political office never really helped the trade union movement or teachers,” Robinson said.

“At one time, we had two Ministers of Education — a minister of education and a minister of state and they were teachers,” he said.

“We had a lot of ministers of education who are teachers. And we were happy that they become part of the higher service because we always want our teachers to serve at a higher level. But in reality, it makes no difference. In most cases, you’re wearing a different hat. You’re on a different side and you have to think like those who are with you.”

He said that when the union signed a collective agreement in 2003, the two ministers of education were teachers.

“And we have to fight tooth and nail even to get the business of the teachers union on the hundred days programme. We have to pin them down to start the negotiations. And a lot of the stuff that we would have agreed, now, we still have a fight to keep these things. We talked about hard area allowance, we talk about election leave, we talk about study leave. We, as a union, now, we still have to fight.

“So we have to watch the politicians very carefully. While we wish them all the best, the union — and want our members out there to understand this — stand up with your union. The union is your voice. The union is what is going to stand up for you at the end of the day. Go and vote who you want. That’s your thing; nobody getting into that.

“But when the leadership of the union takes a position in your interest, forget about your party and jump with the union. Stay with the union. When you’re done, you go back and meet them.”

He, however, urged teachers who are members of political parties to advance the interest of the union at their various levels.

“I would also urge you when you are in your political party at your constituency council or wherever, whatever structure, put the union agenda on that.

“When people come to vote for you, tell them we need more money. COVID is difficult times now; we’re spending more but you freeze our increase in salary,” said Robinson, who is a retired teacher.

“And now we’re hearing threats about our end of year allowance. And this is election year and people who’re uttering these things I think they not using their common sense.

“If teachers out there open your eyes and see anybody who is not working in your favour, you know what you have to do. You are the critical thinkers. I don’t have to tell you that,” Robinson said.