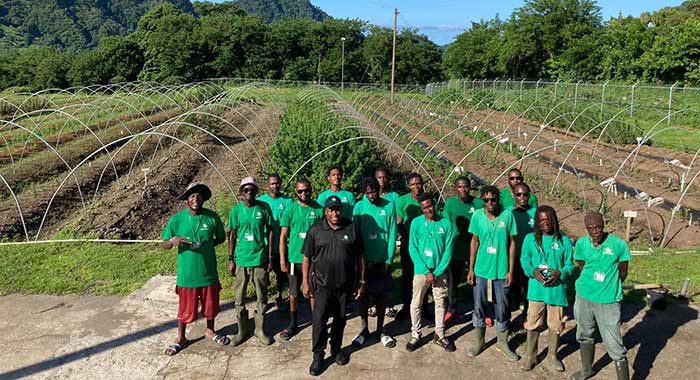 Workers on the site of their Green Lava medicinal cannabis productions at Queensbury.

The Cabinet of St. Vincent and the Grenadines has given the green light for the start of operations of the first cannabis pharmacy in the country.

This follows approval of the first cannabis dispensing licence.

This means that the company can now procure and dispense medicinal cannabis products legally in the country. The company, Green Lava (SVG) Inc., was among the first entities to receive the approval of Cabinet for a medicinal cannabis licence on July 10, 2019.

After making the requisite investments to implement the stipulated security and operational requirements, Green Lava officially launched operations on Nov. 15, 2019.

The company has a staff compliment of over 20 persons, involved in medicinal cannabis production at its five-acre farm in Queensbury, Vermont.

Government on May 6, 2020, Green Lava will now further roll out its business model with the establishment of a pharmacy to provide medicinal cannabis products to persons with qualifying medical conditions.

The first step involved an application for a Retail Pharmacy Permit, which received approval from the SVG Pharmacy Council on July 28, 2020.

Green Lava has signed agreements with two local traditional cultivator’s groups to procure raw cannabis product from their farm to make available in its dispensary.

There are some 20 “qualifying medical conditions” through which patients can access medicinal cannabis in SVG under the Medicinal Cannabis Industry Act 2018. These include, pain associated with cancer, severe and treatment resistant nausea and vomiting due to chemotherapy, Parkinson’s disease, multiple sclerosis, glaucoma, sickle cell anaemia, anxiety, sleep disorders and chronic pain.

There is also provision for any other illness or condition to be incorporated as a qualifying medical condition upon declaration by the Minister, acting on the advice of the Medicinal Cannabis Advisory Council.

“This milestone is but one of several achieved in the local Medicinal Cannabis Industry so far for 2020, despite the challenges of COVID-19,” a press release said.