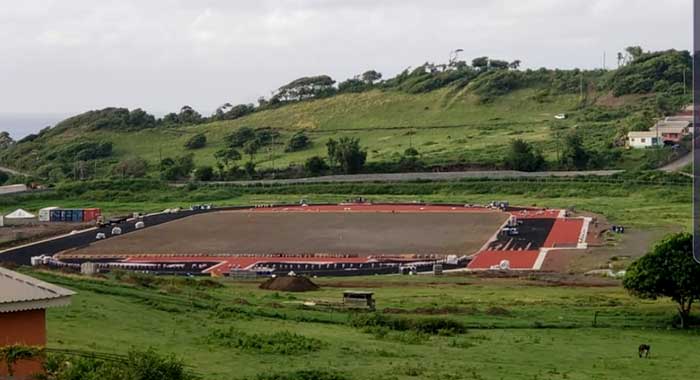 The opposition Leader noted that the ULP said years ago that it had the money for a national stadium but is only now building an athletics track. (Photo: Asberth Williams/Facebook)

The Vincentian people have been “treated with contempt” by the ruling Unity Labour Party (ULP) as evidenced by the broken promises over the years.

Leader of the Opposition Godwin Friday told last Thursday’s virtual rally of his opposition New Democratic Party (NDP) that the ULP first promised the nation a new hospital in 2001 — 19 years ago.

The ULP has since said that it will build an acute referral hospital in Arnos Vale, at the site of the decommissioned E.T. Joshua Airport.

“They promised us a national stadium since 2001 — said they got money from friendly governments to build it with — but they failed to deliver.

“Now, they are hastily providing a track that is not to Olympic standards.  This is what the country waited 20 years for?  We want our athletes to be able to compete with the best, and to aim to be Olympians too,” Friday said.

“The ULP promised us geothermal energy, but then had a captain’s pick as to where it should go. This project has failed. The promise was just that, nothing more,” he said of the project, the drilling rig for which was recently decommissioned and returned overseas.

“After all the old talk and bravado about game-changer project and cheaper, cleaner energy for the foreseeable future, nothing,” Friday said.

“Yet, under ULP government, unemployment has gone up from just over 20 to nearly 26%. Young people feel the pain even more, as over 46% of them — roughly half of them — are without a job.  That number is probably higher in reality.”

The opposition leader said that the ULP would say anything to get votes.

“And they will come bearing gifts — lot of gifts that we all will have to pay for. The heavier the guilt about failing the people; they larger the gift,” he said.

Friday said that in the face of the ULP’s “record of failure and broken promises; there is more old talk, more sweet talk, more mamaguy.

“Oh really?  Vincentians are not fools.   Ralph and the ULP can’t fool the people all the time.  This fooling business must stop. And the time to stop it is now,” he said.

Friday said that 2020 is time for real change.

“SVG needs a long-term plan to create jobs and opportunity. Only the NDP is presenting that vision.”

He said that is why he has been travelling the country, listening to the people.

“I walked the length of SVG on foot to hear from you, I put the call out on social media; I have been calling.

“Our plan puts together your hopes and visions for a brighter future — one where everyone who wants a job can find one, where our young people don’t have to leave our blessed SVG, unless they want to.

“As a small island nation, our people are our greatest resource. But, for too long, we let that resource slip like sand through our fingers.”

Friday said that 20 years of the ULP administration “has simply resulted in a lack of economic opportunities and many of our people leave for better employment opportunities in Canada, USA, UK and other Caribbean countries”.

He said that many of these people are “lost to our country for good; their productive lives, out of necessity, are spent elsewhere.

“This is a waste of talent and the result is that SVG is ill equipped to grow our economy and prepare for a brighter future.”

He said that cost of living has risen and it is hard to make ends meet.

“Vincentians need jobs and incomes to look after our families. There is serious concern as to what the future holds and what prospects there are for our people.

“Our country and our people have been failed and let down time and time again by the ULP Government. Promises have been made and assurances given but they have not been kept,” the opposition leader said.